An alliance of German Islamic organizations has surveyed the country's main political parties on a range of issues they say concern Muslims, from refugee policy to circumcision. All the parties answered – except one. 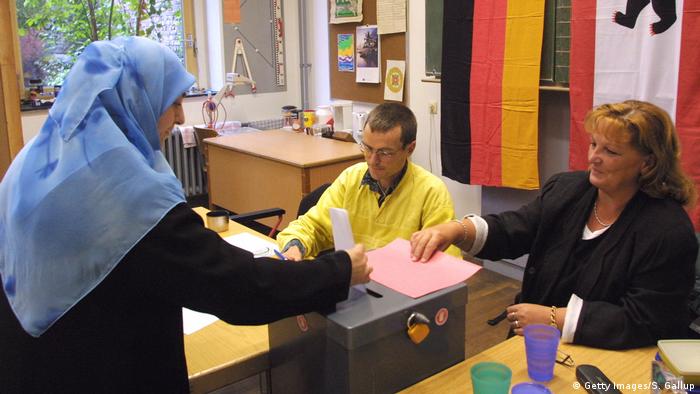 The Central Council of Muslims in Germany, as well as the German Muslim League (Deutsche Muslim Liga) and the Islamische Zeitung newspaper on Monday published the results of a survey sent to the parties expected to be voted in to the next Bundestag.

Of the 61.5 million eligible voters in Germany's nationwide elections due to be held September 24, about 1.5 million are Muslim.

The survey's publishers Aiman Mazyek, Belal El-Mogaddedi and Sulaiman Wilms wrote that, like all citizens, these voters were interested in issues surrounding pensions, climate protection and education - parties' positions on these were well-covered.

"However, a time of growing hostility toward Islam, German Muslims are also considering how parties deal with issues related to Islam and the concerns and suggestions of Muslim citizens when they decide who to vote for," they wrote.

From dual citizenship to weapons exports

The researchers sent out 30 questions, asking for parties' positions on a wide range of national and international topics. The Left party, Greens, Free Democrats, Christian Democrats (and their Bavarian counterparts, the Christian Social Union) and Social Democrats all answered.

"The only party, that did not respond despite several attempts to follow up with them via email and telephone, was the AfD," the survey's publishers wrote, referring to the Alternative for Germany party, which posits itself as anti-Islam and anti-immigration and last year publicly clashed with the Central Council of Muslims.

The survey included a question on controversial public debates surrounding the circumcision of boys and ritual slaughter of animals (most supported no change to the status quo) and what the parties planned to do about what surveyors called "the growing discrimination against Muslims in parts of society, the economy, politics, media and social networks" (all spoke out against discrimination.)

Other topical questions included where the parties stood in relation to weapons exports and dual citizenship. The full survey can be found here (in German).