Is the space for critical thinking shrinking in Pakistan? | Asia | An in-depth look at news from across the continent | DW | 26.06.2020

Is the space for critical thinking shrinking in Pakistan?

A number of liberal academics have been sacked by their universities, allegedly over their anti-government stance. Rights groups have expressed grave concerns over a shrinking space for dissent in Pakistan. 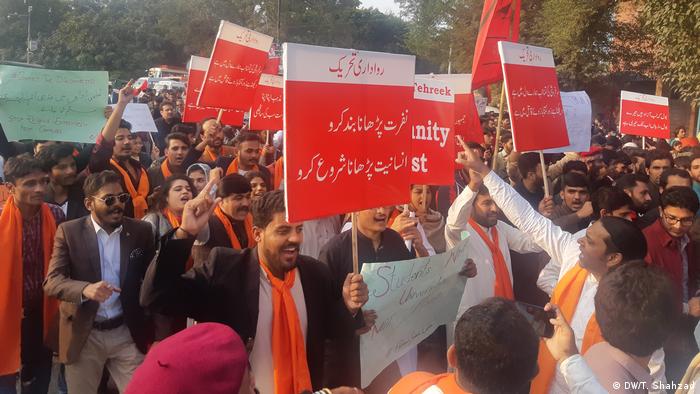 Ammar Ali Jan, a prominent Pakistani academic and activist, recently said on Twitter that he would be parting ways with Lahore's Forman Christian College (FCC), where he taught political science.

Jan is a renowned progressive scholar who participates regularly in social and political movements. He has been vocal against alleged military atrocities in the insurgency-marred Baluchistan province. He also lends support to the Pashtun Tahafuz Movement (PTM) in the country's northwestern areas.

"After I participated in a student demonstration, the government registered a sedition case against me. The university administration told me to stay away from these activities and warned that they would take action against me if I didn't knuckle under," Jan told DW, adding that educational institutions in Pakistan are being pressured by authorities to toe their line.

Rights groups say the freedom of expression in Pakistan, particularly the freedom of press, has come under immense pressure since Prime Minister Imran Khan came to power in August 2018. The military has further consolidated its power during Khan's government, activists claim.

The management of the Forman Christian College did not respond to DW's request for a statement on Jan's case.

"That academic freedom has always been under threat in Pakistan is old news. What is somewhat new is the frequency with which lecturers, professors, researchers, students, and even writers feel threatened now in both private and public-sector universities. These threats are of multiple nature and presumably emanate from various quarters," wrote The News International, a leading English-language newspaper in Pakistan, in its June 26 editorial.

According to Pakistani media and activists, Pervez Hoodbhoy, an internationally renowned physicist, has also been told by the Forman Christian College that his contract will not be renewed next year. Hoodbhoy is known for expressing views against religious obscurantism and militarization of the state.

Jan's tweet prompted other secular academics to speak out against curbs on academic freedom.

"In 2018, I was hired to teach politics at a local university in Lahore. After spending two semesters there, the management told me that my contract would not be extended. When I asked the head of department as to why I was being abruptly dismissed, he told me that the university had received complaints about my political views," Aima Khosa, an academic and rights activist, wrote on Twitter.

Similarly, Zaighum Abbas, who taught at Lahore's Government College University from 2015 to February of this year, said he was dismissed in the middle of the semester for expressing his political views.

"We have noticed that educational institutions are increasingly sacking teachers who don't toe the government's line. The state feels threatened by liberal teachers and academics," Abbas told DW.

"I was accused of being a traitor and an anti-state teacher who was trying to promote secular ideas among students. These are usual propaganda tools," he added.

The government and the military deny these accusations, with Prime Minister Imran Khan stating that media is absolutely free in Pakistan.

Some supporters of the government say that secular activists are involved in anti-Pakistan activities and should be reined in.

"The military has nothing to do with the contracts of these academics. If somebody has been sacked, it is likely due to the terms and conditions of their contract. They should not blame the military for everything," Aijaz Awan, a retired military officer and defense analyst, told DW.

Ghulam Mustafa, another retired military officer, says that people like Jan are presenting a distorted view of Pakistan's history and politics. "These academics are involved in an anti-army propaganda. The army has nothing to do with their contracts," Mustafa told DW, adding that academics should abstain from political activities. "Their job is to teach and not to indulge in political activities."