Sajid Soomro: Another Pakistani academic falls victims to blasphemy law | Asia | An in-depth look at news from across the continent | DW | 16.06.2020

A Sindhi literature professor has been detained under Pakistan's controversial blasphemy laws. Activists say his arrest is yet another example of growing religious intolerance in the Muslim-majority country. 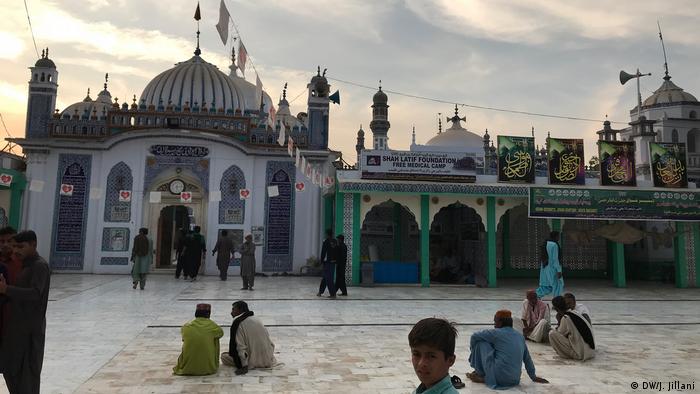 Sajid Soomro, a Pakistani professor of Sindhi literature at Khairpur's Shah Abdul Latif University in Sindh province, was arrested on June 10. Police filed a blasphemy case against Soomro under the Pakistan Penal Code. He has since been detained and is awaiting trial.

The professor is known to Pakistani authorities for his dissenting views and criticisms of the country's most powerful clerics.

"Sajid has written things critical of seminaries, religious beliefs, the concept of heaven and polygamy. He has also criticized Pakistan. Therefore, he has been registered under the relevant sections of the law," Hakim Ali Kalhoro, a local Sindh police officer, told DW.

However, a number of human rights activists, civil society organisations and politicians have expressed grave concern over the blasphemy registration against Soomro under Pakistan's broad and controversial blasphemy laws. Soomro's lawyer Fayaz Khamisani told DW that the case against his client did not comply with the necessary legal formalities.

Asad Butt of Pakistan's Human Rights Commission believes that the outspoken literature professor is being punished for expressing views that did not correspond to those of the Islamabad government.

"He attended the funeral of a Sindhi nationalist which did not go down well in some powerful circles who might want to teach him a lesson. We believe that if somebody has different political views then he or she should be engaged in dialogue, but using blasphemy as a tool to silence voices could become very catastrophic," Butt said.

Member of senate and former president of the centre-left National Party Mir Hasil Bizenjo said, "It is disheartening to see the registration of blasphemy cases against intellectuals and authors. We should have enough patience to tolerate opposing points of views. Such cases trigger fear among academics, stifling healthy debates."

Arfana Mallah, a professor at University of Sindh, appealed to people across the country to protest Soomro's arrest. She told DW that she received threats to her own life after publicly showing her support for Soomro. Mallah did not elaborate further on the nature of the threat.

Surge in separatism and sectarian violence

Sindh, one of Pakistan's four provinces and home to the country's largest city, Karachi, is known for its distinct culture which is strongly influenced by Sufism, a mystical form of Islam that emphasizes the inward search for God. Sindh province is home to Pakistan's largest Hindu population and also hosts a significant number of Shiite Muslims.

Over the last 15 years, the growing number of insurgents and extremist seminaries are said to be garnering force and undermining Sindh's sectarian harmony. Soomro had spoken out about such developments in Pakistan, blaming Islamabad for the rise of violent extremism on Pakistani soil.

In February 2017, the Islamic State of Iraq and the Levant (IS) claimed a suicide attack on a Sufi shrine in the town of Sehwan in Sindh. The attack, which led to the deaths of at least 72 people, was the deadliest in a string of bombings claimed by IS, the Pakistani Taliban and other militants.

Reports also emerged concerning forced conversion of Hindu girls in Sindh, compelling some Hindu families to migrate to India. In response, the World Sindhi Congress (WSC), a human rights education and advocacy organization for Sindh and Sindhis, submitted a report to the UN Office of the High Commissioner for Human Rights, urging for an intervention in the forced conversion of minority girls and women in Pakistan.

A number of Sindhi nationalists have also called for the separation and independence of their province from the rest of Pakistan, but they are devoid of mass support. Some Pakistanis considered Soomro to be a Sindhi nationalist.

Blasphemy is a sensitive topic in the Islamic Republic of Pakistan, where around 97% of its 180 million inhabitants are Muslim.  Hundreds of victims of blasphemy charges have been languishing in Pakistani jails for years. People have been lynched by angry mobs, or assassinated, on allegations of insulting Islam or its Prophet Muhammad.

In 1927, Pakistan inherited the blasphemy laws from its British colonial rulers who had made it a criminal offence to commit "deliberate and malicious acts intended to outrage religious feelings of any class by insulting its religious belief."

The Islamic military dictator General Zia-ul-Haq then introduced extensions of the laws between 1977 and 1988, including life imprisonment for those defiling or desecrating the Holy Quran. Later, the death penalty was declared mandatory for anyone blaspheming against Prophet Mohammad.

In December last year, 33-year-old university lecturer Junaid Hafeez was sentenced to death on blasphemy charges. The Bahauddin Zakariya University lecturer was accused by hardline student groups of insulting the Prophet Muhammad on social media and of making derogatory remarks in March 2013.

Hafeez was sentenced behind bars without trial for six years, with much of that time spent in solitary confinement. His lawyer, Rashid Rehman, was shot dead in his office in the city of Multan in May 2014.

Pakistan has yet to execute anyone for blasphemy. Most of those slammed with the death penalty have had their sentences overturned or reversed on appeal.

Rights advocates, who have long been demanding a reform of the controversial laws, said the laws have little to do with blasphemy and are often used to settle petty disputes and personal vendettas.

A 2015 study conducted by the Hague-based International Court of Justice on Pakistan's implementation of blasphemy laws said that more than 80% of the trial court convictions are overturned on appeal, largely due to the uncovering of evidence or fabricated complaints based on "personal or political vendettas."

Furthermore, Pakistan has registered at least 702 blasphemy cases against minorities, making up 52% of all cases. A few months ago, a Hindu teacher was registered in a blasphemy case and is being kept in a high security cell in Sindh.

The case of Asia Bibi, a Pakistani-Christian who was sentenced to death for blasphemy in 2010, remains one of Pakistan's most high-profile blasphemy cases. After having spent over eight years in jail, Bibi was acquitted by the Islamic country's top court in October 2019. She then moved to Canada to start a new life. But her ordeal may not yet be over. Hard-liners have pledged to continue pursuing her until her death.