Asia Bibi was accused of making derogatory remarks about Prophet Muhammad, and was on death row for 8 years until a court acquitted her of blasphemy charges. 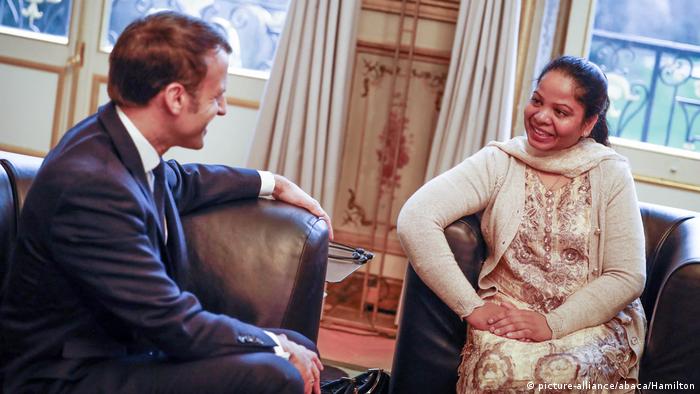 Asia Bibi said on Friday that she had been invited to live in France, after a meeting with French President Emmanuel Macron.

"I have received the invitation from the president and the French Republic, and I’m honored," she said.

She had gotten into a quarrel with fellow farm workers, when she was not allowed to have water in the same container as the others, since she was Christian. She was subsequently charged with making derogatory comments about Prophet Muhammad.

Asia Bibi spent eight years on death row, until 2018, when Pakistan's top court overturned her conviction. Many orthodox religious groups protested against this action, and called for her death.

She moved to Canada in 2019, and has been living there in a three-room apartment in an undisclosed location.

"France is ready to welcome her if that is her wish, in accordance with the procedures for a request for asylum," a French official said. It is not yet confirmed whether she would be taking up asylum in France or whether she will apply.

Asia Bibi was in France for the promotion of her book "Enfin Libre!" which translates to "Finally Free!" It was co-written with French journalist Anne-Isabelle Tollet.

Bibi lives in Canada with her husband and two children. She does not speak either of the official languages, English and French. In an earlier interview, she had mentioned that she missed her home, food, and culture. She hopes to return to Pakistan one day.

Asia Bibi, a Pakistani-Christian woman accused of blasphemy, was released from jail on Wednesday amid violent Islamist protests against her Supreme Court acquittal. But Bibi can reportedly still not leave the country. (11.11.2018)

Pakistani police have arrested the leader of a hard-line Islamist party who staged nationwide rallies against the acquittal of Christian woman Asia Bibi. The cleric's protests brought major cities to a standstill. (24.11.2018)