Is Pakistan′s war-ravaged northwestern region turning against the military? | Asia | An in-depth look at news from across the continent | DW | 07.05.2019

Is Pakistan's war-ravaged northwestern region turning against the military?

Pakistan's military has accused a Pashtun civil rights movement of destabilizing the country at Afghanistan's behest. Rights groups say that the movement is being targeted for opposing military policy in Pashtun lands. 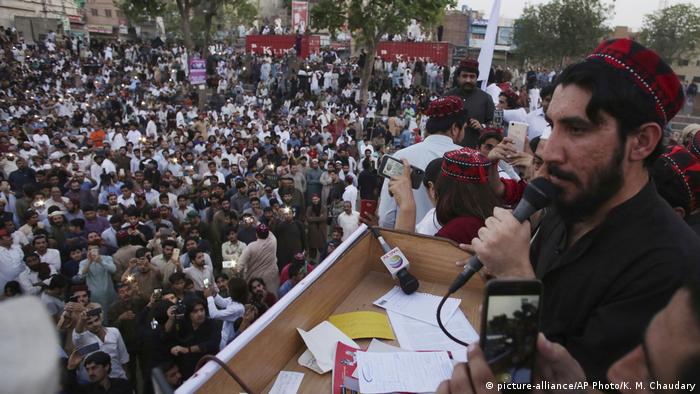 A new movement has sprung up in Pakistan's Pashtun-dominated northwestern areas. Its supporters, who are wary after decades of their region being used as a battleground, have taken on both jihadis and Pakistan's powerful military.

The Pashtun Tahafuz Movement (PTM) has gained considerable strength in the past two years, drawing tens of thousands of people to its protest rallies. Its supporters are critical of the war on terror, which they say has ravaged Pashtun areas in both Afghanistan and Pakistan.

Last week, Major General Asif Ghafoor, a spokesman for the Pakistani military, accused the PTM leadership of working against the country. He alleged that the PTM is receiving money from Indian and Afghan intelligence agencies.

"Their time is up for the way they are playing into the hands of others," Ghafoor warned the PTM leadership in a press conference on April 29.

On Sunday, a police report was filed against PTM official and parliament member Ali Wazir and 11 other PTM activists for allegedly chanting slogans against the Pakistani state and the country's security forces.

"Speakers were inciting people against the army and attempted to undermine the country's security," the report said, adding that further investigations were underway.

Read more: A movement of millennials in Pakistan is dubbed the Pashtun Spring 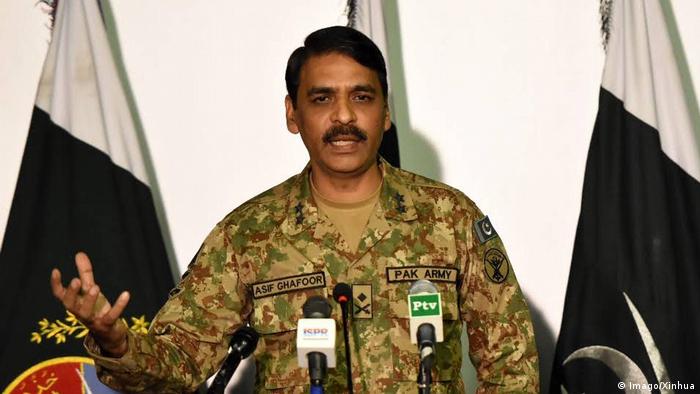 The PTM demands an end to extra-judicial killings and arbitrary detentions of Pashtuns in the name of war on terror. It has struck a chord with thousands of Pashtuns. Supporters of the movement blame both the Pakistani military and Islamists for the destruction in their region

As the battle for Afghanistan continues, the Afghan and Pakistani Taliban, who Kabul and Washington say receive support from the Pakistani army and its Inter-Services Intelligence (ISI) agency, control vast swathes of territory in the war-torn country.

On the Pakistani side, the tribal areas along the Afghan border continue to suffer due to Islamist activities and the security forces' operations that caused deaths and displacements on a large scale.

Speaking to DW, Manzoor Pashteen, the 26-year-old PTM founder, said the military's allegations against the PTM are "baseless and false."

"They want to put pressure on us so that we relinquish our demands," said Pashteen. "We are ready to negotiate with the state."

Pashteen said that he wants to take legal action against Pakistani general Ghafoor's accusations and "fight our case through constitutional means."

The military generals, however, believe that the PTM is insensitive to the Pakistani army's "sacrifices" in the war against terror and militant groups.

"General Ghafoor's words and tone indicate a hardening line towards a few PTM leaders, after efforts by the state to undercut the group by restricting its public activities and forbidding media coverage of its protests," Michael Kugelman, a South Asia expert at the Washington-based Woodrow Wilson Center for Scholars, told DW.

"The military's stance amplifies what has been a rather confused state policy towards the PTM. The army's harsh words have often been accompanied by more conciliatory language, including some softer language from Pakistan's army chief after Ghafoor's press conference," Kugelman added.

The Afghan government, which usually refrains from commenting on Pakistan's domestic politics, has praised Pashteen's campaign in the past. Afghan President Ashraf Ghani shared several tweets about the "Pashtun march" in February 2018, hoping that it would succeed in "uprooting and eradicating terrorism from the region."

The Pashtun issue has been a sensitive one for Pakistan since the South Asian country gained independence from British rule in 1947. With a large Pashtun population in both Afghanistan and Pakistan, the idea of an independent Pashtun-majority homeland baffled Pakistan right from the beginning. Some scholars say Pakistani authorities favored Islamization of the region to rein in the "Pashtunistan" movement, led by liberal and secular politicians and activists.

The PTM could be viewed by Islamabad as another such effort to unite Pashtuns from both sides of the border, although the group hasn't said anything about it.

"Can the PTM unite Pashtuns across the Durand Line [Afghan-Pakistan border established by the British]? I think it is already doing it. Rallies have been staged in the Afghan city of Kandahar — the birthplace of the Taliban — Jalalabad city, and in Kabul in support of the PTM. Common Afghans are raising slogans of peace," Saleem Shah, an Islamabad-based researcher and activist, told DW.

But does the Afghan government's praise for the PTM mean that it is also funding the movement?

"The Afghans are only morally supporting the PTM because they know what the Pakistani military is doing in Pashtun-dominated areas. But the Afghan government does not provide any kind of financial support to the movement," Ghafoor Liwal, Afghanistan's former acting minister for borders and tribal affairs, told DW. 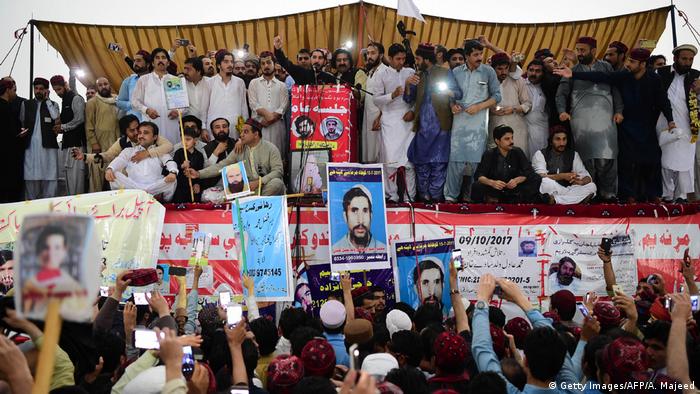 Zabi Sadat, a lecturer in Kabul, is of the view that Pakistani officials are trying to divert the attention from war atrocities by slamming peace movements like the PTM.

But some analysts say that Afghanistan's direct or indirect support to the PTM could be harmful for the movement.

"What Kabul is doing could backfire because Islamabad will use it as an excuse for its support for the Taliban," Yunas Fakur, a Kabul-based analyst, told DW.

Despite its difference with the PTM leadership, the Pakistani military spokesperson said Monday that the state is trying to address the PTM's demands.

Asif Ghafoor said that many of their demands have already been met, including the clearing of landmines in the tribal areas. Some 101 soldiers lost their lives during the clearance operations, he said.

Supporters of the army say that the PTM leadership is not cooperating with the authorities and only want to make a fuss.

"The PTM is trying to defame Pakistan's military. Pahsteen actually does not want peace in the region — peace that the army has restored after much sacrifice," Akbar Ali, a resident of northwestern Kurram district, told DW.