Is the IEA underestimating renewables? | Environment | All topics from climate change to conservation | DW | 26.03.2018

Scenarios from the International Energy Agency (IEA) have failed to predict the growth of renewables and overestimated the role of nuclear. Critics say that's a political choice. 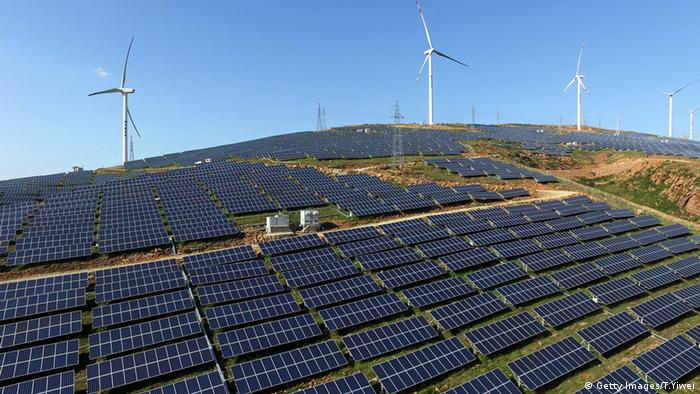 Last year, the world's photovoltaic power capacity overtook nuclear for the first time – reaching 402 gigawatts, compared to 353 (GW). Wind power outstripped nuclear back in 2014, and by the end of 2017 amounted to 539 GW.

According to the World Wind Energy Association, 2017 saw the installation of 52.6 GW of new wind capacity. The latest estimates from Solar Power Europe put PV capacity installed in that year at 98.9 GW.

Back in 2010, you might not have predicted such a shift in the global energy mix – at least, not if you were basing your predictions on the International Energy Agency's annual Word Energy Outlook (WEO), which estimated annual deployment of less than 10 GW of photovoltaic capacity.

According to this scenario, globally installed solar capacity would hit around 85 GW last year – 315 GW less than the actual figure.

Critics say this is part of a pattern of the IEA consistently underestimating the growth of renewables while making unrealistic assumptions about the development of nuclear. 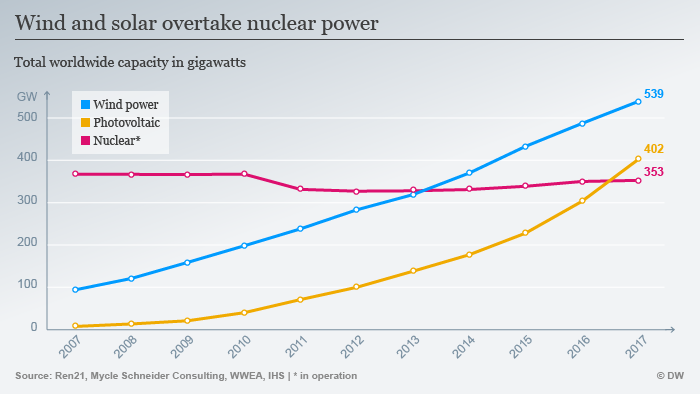 And that imbalance has, according to a 2015 study, has continued in subsequent annual WEOs from the IEA, which ignores facts such as "climate protection and divestment of finance from the conventional energy sector."

Claudia Kemfert, head of the German Institute for Economic Research's energy and environment department, told DW the IEA has underestimated drop in renewable power costs, as well as the cost of nuclear and fossil alternatives.

"Probably for political and economic reasons, neither the external costs of fossil fuels nor the cost increases of nuclear energy have been factored in," Kemfert said. "The fossil fuel and nuclear industries have an interest in artificially exaggerating the cost of renewables in order to influence policy in their favor."

Sven Teske of the Institute for Sustainable Futures at Sydney University, an advisor to the International Panel on Climate Change, told DW he'd been told unofficially that how much nuclear power was included in IEA scenarios was "basically dictated."

Hans-Josef Fell, president of the Energy Watch Group, says the IEA acts "on behalf of the OECD governments that ultimately oversee it," and reflects their ongoing commitment to the fossil fuels sector.

And that has serious consequences, Fell says. "It is likely these scenarios are a major culprit in the global community's failure to put a sufficiently intensive focus on renewable energy over the last ten to 20 years," he told DW. "It paints a picture of renewables as too expensive and unable to expand fast enough." 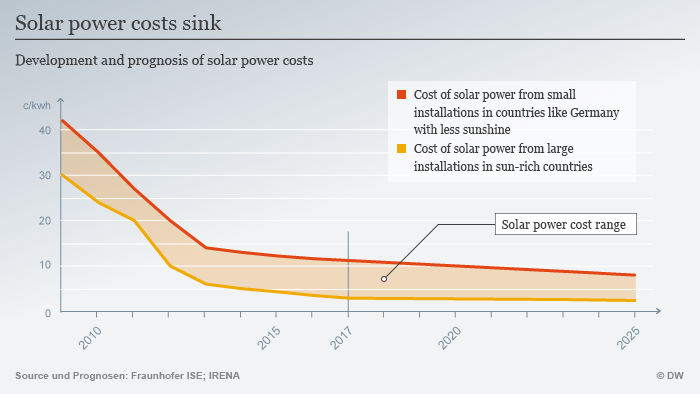 The IEA counters that such claims are based on "a common misconception about the purpose of the Outlook," which deals with "scenarios, not forecasts or predictions," based on actual government policies.

Spokesperson Jon Custer pointed out that the IEA also now publishes a five-year renewables forecast, including an "accelerated case" that assumes governments will adopt more ambitious policies on renewables.

"Solar PV is entering a new era," the report says, that "marks a turning point and underpins our more optimistic solar PV forecast," adding that, "this revision is driven by continuous technology cost reductions and unprecedented market dynamics in China as a consequence of policy changes."

Teske says he hopes, "something is happening at the IEA, even if of course they continue to try and underestimate" the prominence of renewables.

If the IEA based its models on the "real prices for renewable and fossil energy, the only conclusion would be that we will arrive will at 80 to 100 percent of renewables within a generation," Teske insists.

On the flip side, there is growing agreement among energy experts that nuclear power cannot be seen as economically viable compared to renewables.

A study by the Lappeenranta University of Technology (LUT) in Finland simulating the costs of the global transition to renewables and found that a 100-percent renewable energy system would be cheaper that what we have today. 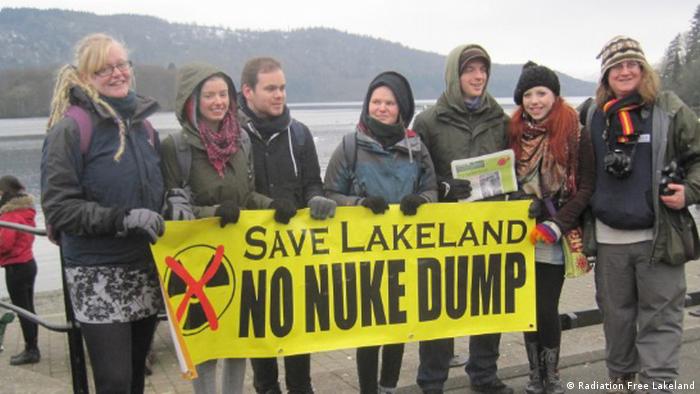 The disposal of nuclear waste is still controversial, especially in the U.K.

Fell, meanwhile, has documented the explosion of nuclear powers costs, as well as the security concerns over new nuclear reactors.

Yet India, Saudi Arabia, Turkey and the UK remain committed to building new nuclear power plants. And Fell sees a motive for this that has nothing to do with securing an affordable energy supply. "The main driving force behind the new nuclear reactors are nuclear weapons, and the desire for nuclear weapons," he told DW.

Scientists at the University of Sussex have come to a similar conclusion. In their study of British nuclear policy they attribute the construction of new reactors to cross-funding with military nuclear programs. They argue that maintaining nuclear power programs and expertise at the expense of electricity customers has the advantage of relieving the defense budget.

Opinion: The end of competition in the energy market

German energy giants RWE and E.ON want to reposition themselves and are planning a radical change. It's a necessary development but will come at the expense of both workers and consumers, says DW's Andreas Becker. (12.03.2018)

It's a new milestone: Europe got more of its power from solar, wind and biomass than coal last year. But when it comes to investment, the European industry is in decline as China steals the title of renewables pioneer. (31.01.2018)