Is the EU an accomplice to Croatian police brutality? | News and current affairs from Germany and around the world | DW | 24.11.2020

Is the EU an accomplice to Croatian police brutality? 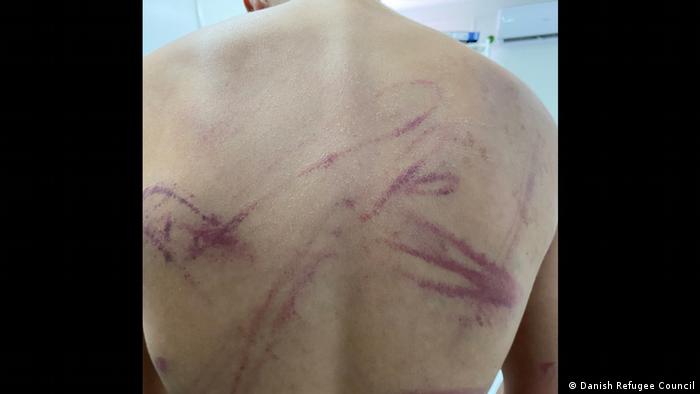 At a recent press conference in Zagreb, the response of Croatian interior minister Davor Bozinovic to accusations of police abuse had something routine about it. He rejected media allegations of police brutality at the Croatian-Bosnian border, dismissing them as part of a campaign by groups opposed to Croatia. However, Bozinovic did not produce any evidence to support his claims.

The news conference was prompted by an article that appeared in the German weekly magazine Der Spiegel a few days prior. It describes the case of a migrant who repeatedly tried to cross the green border from Bosnia to Croatia with the aim of traveling on to western Europe. The man said that he and the other migrants with him were stopped by the Croatian police over and over again. He alleged that the officers beat and robbed them of their belongings before forcing them back over the border into Bosnia half-naked and shoeless.

Julija Kranjec, an expert for migration issues at the Zagreb Center for Peace Studies (CPS), told DW that such behavior would represent a clear breach of international law and EU regulations: "All refugees who reach the territory of an EU member state and apply for asylum there, have the right to have their application individually assessed." She said that includes those who arrive in the EU illegally.

Read more: My Europe: The cynical handling of refugees

This is not the first time Croatian police have been accused of violence at the Bosnian border. Since mid-2018, there have been numerous well-documented testimonies by the migrants affected. There are also hundreds of photos showing evidence of abuse, as well as statements from doctors who have treated migrants' injuries. There have also been reports from non-governmental agencies (NGOs) such as Amnesty International (AI) and Doctors without Borders (MSF) and the UN refugee agency UNHCR, too, has referred to the Croatian police's brutal treatment of migrants.

In 2015, about a million asylum seekers made it into the European Union (EU) via the so-called old Balkan route, but metal and barbed wire fences erected at the border between Hungary and Serbia, and Hungary and Croatia effectively closed it down. Since then, thousands of migrants have been using the "new Balkan route" via Bosnia and Herzegovina to reach Croatia and then travel on to wealthier, western European countries. Getting across that border is not easy either and stranded migrants wait in makeshift camps to seize their opportunity.

At present, there are about 8,000 to 9,000 migrants living close to the Bosnian border. Most of them come from Afghanistan, Pakistan or Syria. The local population was initially well predisposed towards them, but the mood has changed. Now many complain about the "intolerable conditions" and are protesting against both the official and informal camps that have sprung up.

Schengen is the 'chief goal'

CPS expert Julija Kranjec says Croatia’s chief foreign policy goal is accession to the Schengen Area free-travel zone. The country has been an EU member state since 2013, and joining the Schengen Area would be the icing on the cake, representing full integration into the EU. To gain entry, Croatia has to prove that it is willing and able to defend its borders— an outer EU frontier — against large numbers of migrants.

"Croatia is acting under pressure from other EU states," according to Green party politician Erik Marquardt. "Many EU states have complicity in this behavior. It seems as if the European Commission or individual EU member states are exerting political pressure to disregard EU human rights in this case."

One sign of that, Marquardt told DW, was the fact that, "The Schengen Area accession negotiations were only launched after the country started to systematically turn back refugees at the border, use violence and conduct 'pushbacks'."

Following a complaint from Amnesty International, EU ombudswoman Emily O'Reilly initiated an inquiry into the EU’s alleged failures. The inquiry will look into European funding that Croatia received for border operations, and was earmarked for setting up a monitoring mechanism to ensure compliance with fundamental rights and EU law. The human rights group doubts this ever happened and claims that the Commission, in turn, has failed to verify the existence of such a mechanism or check how the allocated funds have been spent.

It remains to be seen whether this probe will significantly raise pressure on the Croatian government to change its practices at the border. The EU’s external borders have gained even greater significance recently, with both German Chancellor Angela Merkel and French President Emmanuel Macron calling for tighter border controls following a series of terror attacks. To that end, experience has shown that Croatia is ready and willing to do what it takes to maintain border security.

This article was translated from German by Julie Gregson