Three explosive-rigged vehicles have been detonated in a deadly attack targeting Iraqi border posts, officials have said. The attackers were from Belgium, France and Senegal, according to an "IS" statement. 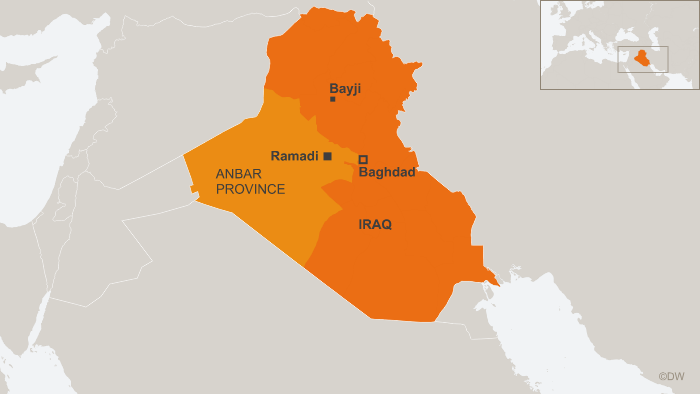 At least four Iraqi security personnel were killed in a suicide attack Saturday near a border crossing with Jordan, said Sabah Karhout, the head of the council of Iraq's Anbar province.

The attackers detonated three vehicles, including a truck, at three successive checkpoints at the Turaibil crossing, according to Karhout, who claimed eight people were injured in the blasts.

Both the deputy head of the crossing, Khaled Alwan, and Iraqi army Colonel Jabr Khailan confirmed the attack but provided higher tolls. In addition, a Jordanian official, speaking on condition of anonymity, said that 12 Iraqis were taken across the border for medical treatment.

'IS' claims attackers from the West

The "Islamic State" (IS) claimed responsibility for the attack in an online statement, saying that the suicide bombers were from France, Belgium and Senegal. Photos of the alleged French and Belgian attackers suggest Middle Eastern origin.

The Islamists also said that their militants targeted an army patrol, a mess hall and sleeping quarters for security personnel, and that at least 40 soldiers were killed in the attack.

Baghdad would investigate the assault, an Iraqi military spokesman said.

The IS militia controls much of the vast desert province of Anbar, which borders Syria, Jordan and Saudi Arabia.

Earlier this month, the government announced a new offensive in the area. On Friday, an Iraqi general and staff officers were killed in an ambush involving a bulldozer packed with explosives on the other side of the province.

Jordan, which is part of the US-led coalition fighting IS, increased border security after the latest attack.

"We have taken precautionary measures and beefed up security in such circumstances," an official Jordanian source told Reuters.

Jordan stepped up its military action against the IS after the group burned a captured Jordanian pilot alive, and published a video of the brutal execution early February.

A Saudi-led coalition has launched a new round of airstrike in Yemen, targeting several rebel positions across the country. Pakistan's top leaders are in Saudi Arabia to push for negotiations in the Yemen conflict. (23.04.2015)

'Islamic State' has taken control of large parts of a Palestinian refugee camp, Yarmouk, to the south of Damascus. Meanwhile, neighboring Jordan has temporarily closed its Syrian border amid clashes. (01.04.2015)