'Islamic State' has taken control of large parts of a Palestinian refugee camp, Yarmouk, to the south of Damascus. Meanwhile, neighboring Jordan has temporarily closed its Syrian border amid clashes. 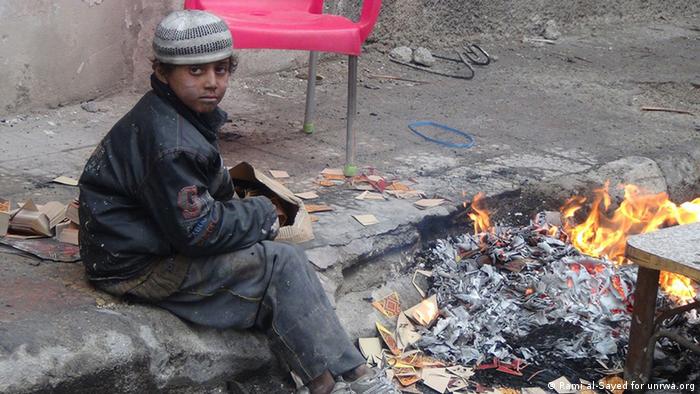 The British-based Syrian Observatory for Human Rights said on Wednesday that IS had seized a "large part" of the refugee camp after fighting with Palestinian groups who also oppose President Bashar al-Assad's regime. Fighting inside the camp was reported to have continued.

"Fighters from IS launched an assault this morning on Yarmouk, and they took over the majority of the camp," said Anwar Abdel Hadi, director of political affairs for the Palestine Liberation Organization in Damascus.

Yarmouk, which was previously a thriving neighborhood and home to 160,000 Palestinian refugees and Syrians, has been caught up in the country's fighting between government forces and Syrian insurgent groups, including al Qaeda's Nusra Front, for more than a year.

Only about 18,000 residents are estimated to remain in the camp after many fled the fighting.

Also on Wednesday, neighboring Jordan said that it had closed its main Syria border crossing. The move followed fierce clashes between rebels and pro-regime forces for control of the "Jaber" border post.

Jordan's Interior Minister Hussein Majali said the temporary closure to travelers and goods was a "preventive measure to safeguard the lives and security of travelers due to the fighting underway on the other side of the border."

In neighboring Iraq, however, the country's defense minister said on Wednesday that security forces there had achieved a "magnificent victory" over IS in Tikrit. The battle for Tikrit, 130 kilometers (80 miles) north of Iraq's capital, Baghdad, is seen as a key step toward eventually driving the militants out of Mosul, the country's second-largest city.

The jihadist militant group has seized large swathes of Syria and Iraq, and fought not only against the Assad regime but also against other rebel groups as it continues its offensive to expand IS territory.

'A secure Iraq won't come from a military solution'

Syrian president says Islamic State has grown despite US airstrikes

In a US television interview, Syrian President Bashar al-Assad has said the "Islamic State" (IS) has continued to grow during the last six months, despite US air strikes. The terrorist group has also expanded over land. (30.03.2015)