Abu Bakr al-Baghdadi is purported to have issued his first message since April. He called on fighters to free tens of thousands of jihadis and family members from prison and detention camps. 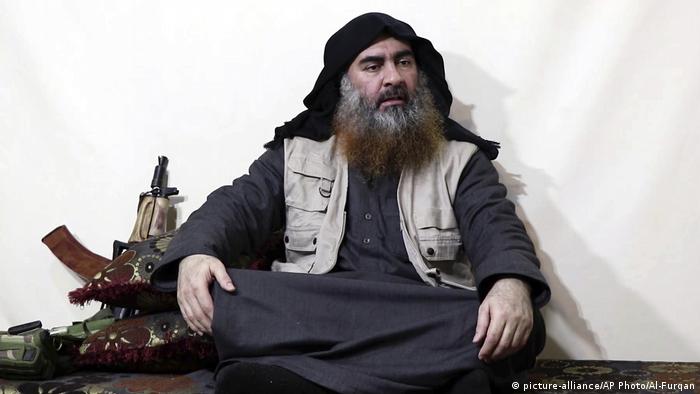 The leader of the "Islamic State" group released an alleged audio recording on Monday calling on followers to free jihadis and family members from prisons and camps in Syria and Iraq.

In a 30-minute audio recording released by the terror outfit's propaganda arm, Abu Bakr al-Baghdadi made what were purported to be his first comments since he appeared in a video in April.

"The prisons, the prisons, soldiers of the caliphate," the elusive IS chief said in a recording published by the Al Furqan network. "Do your utmost to rescue your brothers and sisters and break down the walls that imprison them."

He also said IS continued to carry out operations across the globe.

Thousands of suspected jihadists and their family members are being held in overcrowded prisons and camps in Iraq and Kurdish-held areas of Syria.

In Syria, where the US-backed Syrian Democratic Forces in March pushed IS out of the last sliver of its self-declared "caliphate," tens of thousands of IS family members are being held in detention camps.

One of the largest camps is al-Hol camp in Syria's northeast, where Kurdish forces are holding 70,000 people, many of them families of IS who fled from the group's last bastion in Syria.

The International Rescue Committee said this week that those residing at al-Hol face a "purgatory-like existence."

Kurdish authorities say 12,000 foreigners from dozens of countries, including 4,000 women and twice as many children, are in camps it runs in northeastern Syria. Many face uncertainty over repatriation to their home countries.

Tens of thousands of suspected fighters are also being held in prisons across Syria and Iraq.

Although IS has lost all of its territory in Iraq and Syria, the group still carries out hit-and-run attacks and bombings. Baghdadi, if he is alive, is believed to be hiding out in the desert border regions of Iraq and Syria.

IS affiliates are active from the Philippines and Afghanistan to West Africa. The group is also believed to have sleeper cells operating across the globe.