Is Japan's after-work drinking culture a thing of the past?

Japan's corporate culture traditionally demands long hours, commitment to the company, and frequent drinking sessions. Peer-pressure is still there, but a younger generation of workers is beginning to abstain. As Issei Izawa finishes his degree at a Japanese university, he has a few concerns about where he will work after graduation.

What career opportunities can a potential employer provide? How much will he be paid, and how many hours will he be expected to work in a country where time spent in the office remains a critical yardstick of achievement?

But Izawa is also worried about how much he is going to be expected to drink.

"I've never been a big drinker, but I have older friends and I've heard stories from them about being forced to go drinking with the boss every night after work," said 20-year-old Izawa, who is from Yokohama. "It's part of being at a Japanese company, I know, but I play sports and I don't want to give that up or drop in performance just to go drinking."

"If I do come under pressure to drink, I'm not sure what I'm going to do," he said.

Drinking has long been a major part of Japanese culture. Chinese envoys as far back as the third century reported that the inhabitants of the Japanese archipelago were "much given to strong drink." In the workplace, alcohol serves as a lubricant to break down barriers between managers and workers. After-work drinking parties are meant to encourage bonding and allow people to let their hair down.

This custom is called "nommunication" — a combination of the Japanese word "nomu," meaning drink, and "communication."

It is also an unwritten rule that anything that is said or done at an after-hours event involving alcohol is forgotten the next day.

One side-effect of the easy accessibility of alcohol and pressure to drink is a high level of public drunkenness.

It is common to find intoxicated men and women sprawled on the floors of trains or on train platforms late at night, particularly just after six-month bonuses are handed out in the summer and shortly before the New Year holidays. 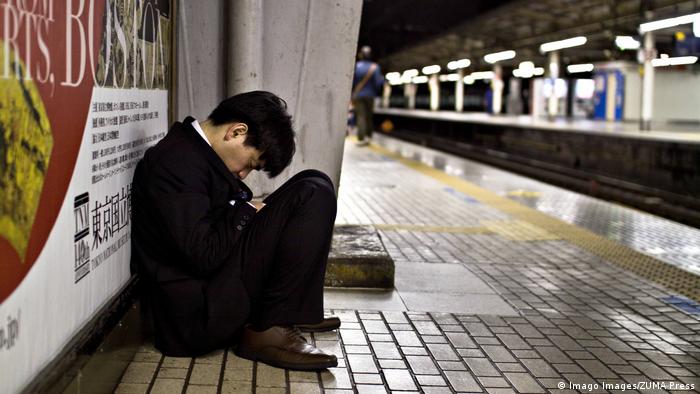 "For anyone who enjoys a drink and wants to spend time with their colleagues, these sorts of after-work events are often very helpful," said Gen Otsuki, a senior official of the Tokyo-based All Nippon Abstinence Association. "But for anyone who does not like drinking and feels pressured into going, it can be very difficult."

Fewer people have been seeking help at the abstinence association in the last five years or so, Otsuki told DW, but it's not because the pressure on workers has eased.

"My personal opinion is that they are under just as much pressure before and that attitudes within Japanese companies have not changed very much at all," he said. "The managers learned that drinking is the right thing to do from their superiors when they first joined the company and they're now pushing the new recruits to do the same."

"That pressure is still there, but I do get the sense that younger workers have changed their lifestyles somewhat and do not always give in to the pressure," said Otsuki.

"That may be because they have less money than in the past, or they are more involved with their children and families. Or maybe they are just getting better at saying 'no' to their bosses."

Kevin, who is a member of the Japan branch of Alcoholics Anonymous, first came to Japan in 1989 and spent some years as a bartender in Tokyo's Shibuya nightlife district. He said that attitudes changed when the Japanese government stiffened the law on drunk driving in 2007.

Under the new law, a driver must have a blood alcohol level of 0%, and the penalty was raised to a fine of more than €8,000 ($8,700) and a prison term of up to five years. The fine for anyone in the car with a driver who has been drinking was set at €4,000 and three years in prison.

The Japanese are losing their thirst for beer

"It was around that time that beer companies started producing zero percent alcohol beers and I began to sense a change," he said. "I belong to a martial arts group and drinking after training was a ritual each time, but I was the first person to break ranks with that and they quickly accommodated me. And little by little, other people have decided they don't want to drink either, so I have seen change over time and not drinking has become more socially acceptable."

Entrepreneur Hiroyuki Miyatake fears, however, that older employees are still heaping pressure on their younger colleagues to drink too much.

"Older workers still have it as part of their work culture, often three or four times a week, and while it may not be as common in every company, I think it's still a regular occurrence in the manufacturing sector and small and medium-size enterprises," said 28-year-old Miyatake, who left a high-pressure job at a Tokyo securities company to set up his own luxury travel company.

"But they have to realize sooner or later that all this drinking is actually very damaging to their company because so many of their staff are hungover the next day, they're ill and they can't do their jobs very well," he said. "The drinking culture has to change."