Is Cuba really pulling the strings in Venezuela?

As the crisis in Venezuela worsens, Cuba continues to throw its support behind the government in Caracas. How much influence does Havana hold over President Nicolas Maduro? 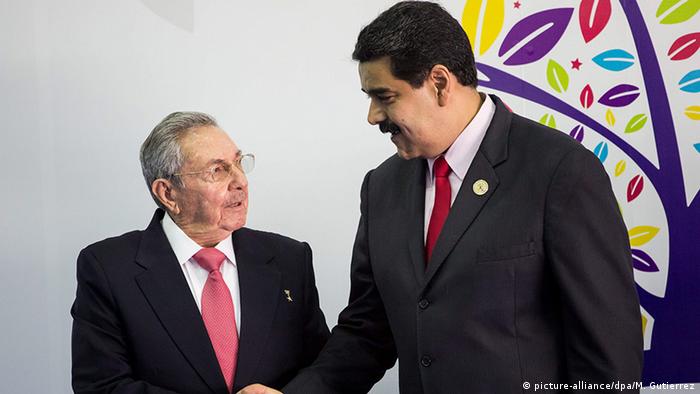 Despite tightening sanctions against the government in Caracas, Washington continues to import some 750,000 barrels of Venezuelan oil each day. The Chamber of Commerce estimates that the US imported a total of $10 billion (8.5 billion euros) worth of oil from Venezuela in 2016. Although that amount is roughly one-third less than it imported in 2015, the US remains the world's largest purchaser of Venezuelan oil.

Cuba, too, is dependent upon Venezuela's vast petroleum resources. In return for subsidized oil - 40,000 barrels a day - Havana sends doctors, intelligence officials and diplomats to Caracas. President Maduro's bodyguards are also from Cuba.

"Cuba plays an important advisory role, it prevents Venezuelan isolation," says Oliver Stuenkel, a professor for international relations at Fundacao Getulio Vargas (FGV), a university in Sao Paulo, Brazil. He says that Havana has seen to it that Caracas engages in "efficient foreign policy." 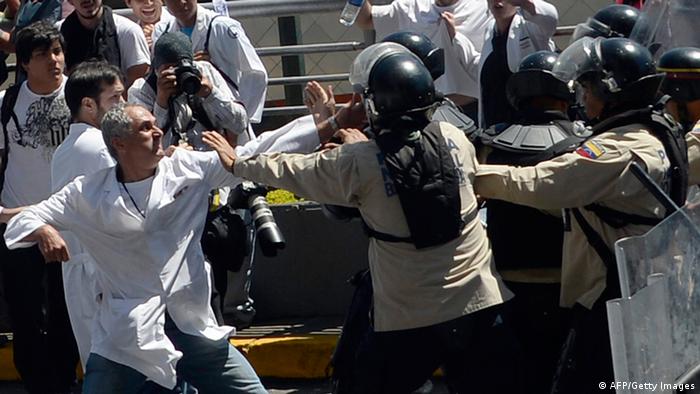 One result of that "efficient foreign policy" is the fact that the 12 member states of the Union of South American Nations (USAN) issued no criticism of Venezuela's controversial new constituent assembly. The Southern Common Market, known as Mercosur, was also unable to fully expel Venezuela for its intransigence, instead suspending its membership temporarily.

When will oil prices rebound?

"There are no indications that Cuba will drop Maduro anytime soon," says Stuenkel, who also serves as a contributor at the Berlin-based Global Public Policy Institute (GPPi). Quite the contrary: "Havana is biding time, hoping that oil prices rebound at some point so the situation in Venezuela can improve." Steunkel believes that is in Cuba's own interests since it is dependent upon subsidized oil deliveries from Venezuela for its own survival.

Cuba can also serve as a model of sorts for Venezuela. When the island nation's economy collapsed after the breakup of the Soviet Union in the early 1990s, Havana declared a so-called "Special Period in Time of Peace" - a euphemism for a time of economic crisis. Combine threshers and buses on the island stood still when Moscow ceased fuel deliveries in 1991, yet the communist government in Havana was able to maintain its firm hold on power throughout the ordeal.

Meanwhile, Venezuela not only exports its oil to Cuba and the US but also to Russia and China, enabling it to pay off debts to both countries. Venezuela's state-run oil company, PDVSA, is dependent upon Russian and Chinese investment to build its refineries. This October and November, some $3.7 billion worth of loans will have to be repaid.

Colombian President Juan Manuel Santos is also cognizant of Havana's influence over President Maduro. During his most recent state visit to Cuba, he sounded out the possibility of a mediation role for Havana in ending the crisis. It is rumored that Santos even pitched the idea of Havana offering political asylum to Maduro and his cabinet.

Yet Santos was forced to return home empty-handed. Despite his good relations with Raul Castro, with whom he worked closely on peace negotiations with FARC rebels over the course of six years, it seems Cuba has no desire to end its support for Venezuela.

Paradoxically, the more Venezuelans flee to neighboring Colombia, Brazil or Peru because of the crisis at home, the stronger Maduro's grip on power becomes. The mass-exodus is making it ever more difficult to organize opposition protests in the country. Now, after the convocation of the new constituent assembly, the parliament - a body in which the opposition holds the majority - has itself been stripped of power.

"The middle-class is gone, it isn't protesting any more," says Stuenkel. He predicts that the demonstrations will wither out. "The people are exhausted, they have to organize their everyday lives," he says. "And not everyone is against Maduro. Those who still get help from the government don't want to lose it."