Is Bangladesh falling into a Chinese 'debt trap'? 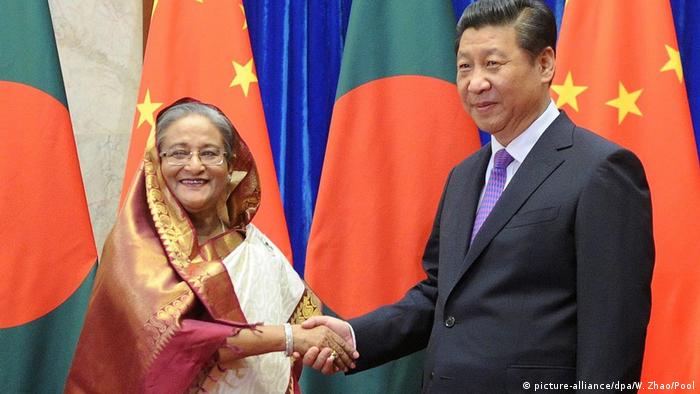 Bangladeshi Prime Minister Sheikh Hasina's official visit to China last week seemingly succeeded in bolstering ties between the countries. During the trip, both sides inked a host of agreements, including two deals to provide loans to the Bangladeshi power sector, worth $1.7 billion (€1.52 billion).

The countries also expressed interest in accelerating the work related to the Bangladesh-China-India-Myanmar Economic Corridor (BCIM EC) project, an initiative aimed at expanding the economic ties of the four countries that together are home to nearly 3 billion people.

Bangladesh and China turned their relationship into a strategic partnership in 2016, and, in recent years, Chinese investment in the South Asian country has risen rapidly.

Read more: Bangladesh emerging as a new IT hub in South Asia

China has pumped more money into Bangladesh than any other country over the past couple of years. Bangladesh saw a record inflow of foreign direct investment (FDI) in 2018, with the country attracting some $3.6 billion of FDI, 68% higher than in the preceding year, according to a report by the United Nations Conference on Trade and Development (UNCTAD). China alone accounts for almost a third of this investment, worth over $1 billion.

Bangladesh now increasingly relies on Chinese money to achieve its ambitious target of producing 24,000 megawatts of power by 2022, up from 17,000 megawatts now. The Padma Bridge, a major road-rail project across the Padma river, is being built by the China Major Bridge Engineering Company. And China's Exim Bank is providing $3 billion for the construction of the rail link accompanying the bridge.

"Chinese investment is a welcome addition for Bangladesh, because it creates a new source of funding," Ahsan S Mansur, executive director of Dhaka-based Policy Research Institute, told DW. "Traditional sources of funding are not adequate for emerging economies like Bangladesh."

Chinese money brings with it other advantages, Mansur said. "It creates a bit of competitive environment. It prompts countries like Japan and India to also come forward and invest."

Bangladesh has announced an ambitious plan to set up 100 special economic zones by 2030. Many Chinese companies appear interested in investing in these zones. Zhejiang Jindun Pressure Vessel Co Ltd., for instance, has offered to invest $5 billion in one such site near Chittagong.

In South Asia, Bangladesh is the second-biggest receiver of Chinese investment, behind Pakistan. But not everyone seems optimistic about the development, with many warning that the growing reliance on Chinese money will make Dhaka beholden to Beijing.

Critics point to Sri Lanka's experience, where Colombo had to cede control of its southern port of Hambantota to China on a 99-year lease after it failed to repay its debts.

Mansur, however, said it would be more beneficial for Bangladesh to draw direct investment from China rather than debt financing.

"Chinese investment comes in both equity and debt. The infrastructure projects are mostly carried out through debt financing," Mansur said. "So I would rather be interested in equity, not debt."

It's too early to say that Bangladesh is falling into a debt trap, some experts argue. Bangladesh's total external debt at the end of 2018 stood at around $33.1 billion, and the share owed to China doesn't seem big, they say.

"The loans granted to Bangladesh by China so far account for just 6% of the total debt," Zahid Hussain, lead economist of the World Bank's Dhaka office, told DW. "There is not enough information as to the grounds on which the loans have been granted," Hussain said.

However, the analyst didn't want to call the Chinese investment a "debt trap."

"It presents both risks and opportunities. The information we have so far doesn't point us to a debt trap scenario."

Why is India concerned?

But trade and investment may not always have the last word when it comes to international relations. In 2016, Dhaka quietly killed a deep sea port project that China proposed to build at Sonadia, in southeastern Bangladesh. New Delhi expressed concern about the project, which if completed would have brought the Chinese presence closer to India's Andaman and Nicobar Islands.

"China has a port facility [Hambantota] in Sri Lanka, they have Gwadar [in Pakistan], they are building a port facility in Myanmar [Kyaukpyu] – this gives India the feeling of being surrounded by China. This is the military dimension of Indian concern," Wolf told DW.

The expert also warned that by pumping investment, China gains political influence over the governments. "So there is a threat for India that China might influence the government of Bangladesh." This influence may also have an economic dimension, Wolf said. "We have seen China driving out other countries from the market. For instance, it has become very difficult for French and German companies to get contracts in African countries."