Bangladesh PM Sheikh Hasina hints at last term as prime minister | Asia| An in-depth look at news from across the continent | DW | 14.02.2019

In an exclusive interview with DW, Sheikh Hasina indicated that her present — and third consecutive — term could be her last as prime minister of Bangladesh. She said she wants to create room for younger leaders.

Just a month ago, Sheikh Hasina assumed office for the fourth timeas the prime minister of Bangladesh.

This is her third consecutive term leading the government of the South Asian nation. In the recently held general elections, her party, the Awami League, and its allies secured 96 percent of the seats in parliament. In her first interview to an international media outlet following her reelection, Hasina confirmed that this would be her last term as premier.

Speaking to DW, she said, "It's the third consecutive term and before that I was prime minister [1996-2001], so it's my fourth term. I don't want to continue for more [time]. I think that everybody should take a break so we can accommodate the younger generation."

A decade of growth

In the last ten years under Hasina's leadership, Bangladesh has made rapid economic progress and is now moving toward being classified as a lower- to middle-income country. Over the past several years, the economy has been growing at an average of 6 to 7 percent annually, trade volume has multiplied and foreign investment has gone up.

But despite increasing prosperity, one in every four Bangladeshis remains poor, according to the World Bank. Sheikh Hasina says the fight against poverty will continue to be her first priority during the rest of her tenure. "Food security, housing, education, healthcare, job opportunities; these are basic needs," she said. "Definitely, every human being wants a better life… We have to ensure that," she added. 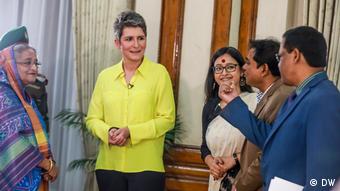 Development versus freedom of expression

Burgeoning growth and development have not silenced Hasina's critics, who say she has not done much to ease restrictions on freedom of expression and prevent attacks on liberal thinkers in Bangladesh.

But Hasina said she supported free thought in the country and criticism was only natural. "If you work more you will hear more criticism," she argued, adding, "You should ask my people whether they are satisfied or not, what they think, whether they are getting all they need, whether I can provide this."

Hasina and her Awami League have also been accused of stifling political discourse and trying to establish a one-party rule, a charge the prime minister denied: "This time, Awami League candidates were elected in 260 constituencies [out of 300]. So, other parties are also in parliament. How can it be one-party rule?," she said. According to her, the opposition parties were weak. "If any particular party can't reach people's minds, can't get their trust and doesn't get votes, then whose responsibility is this? This actually portrays their weakness," she told DW. 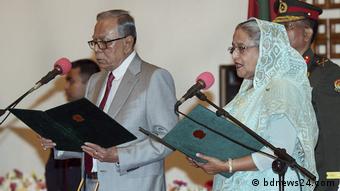 Liberals in Bangladesh have also been criticizing Hasina's Awami League for being too close to the fundamentalist group, Hefazat-e-Islam, and trying to appease religious fanatics. Her government also officially recognized the Qawmi Madrasah — a degree awarded to students in traditional Islamic schools, and said it was equivalent to a master's degree. Critics point out that groups supporting the Qawmi Madrasah are usually fundamentalist and oppose women's emancipation. Shah Ahmad Shafi, the head of the Bangladesh Qawmi Madrasah Education Board recently made comments about not sending girls to school.

Prime Minister Hasina seems unwilling to take responsibility for such statements. "In this country everybody has freedom of speech. So they also have the right to spell out what they want," she told DW, while clarifying that she would not leave any stone unturned to ensure women's education. "What I have done is that education for girls is totally free up to the twelfth grade and then we provide a stipend for them," she explained.

Hasina said her policies have also helped people rethink their notions about educating girls: "In the past, parents used to think: Why should I educate the girl, because one day she will get married and go into another family. But now they don't think that. Now they think, yes, I should educate my girl. She will be able to earn her own money and then she may get married. That way, we are bringing change in the society gradually. Now our child marriage rate has reduced tremendously."

And would Islamist organizations prevent Hasina from achieving her goals?  "Of course not. What I have done is done and it will continue," the premier said. 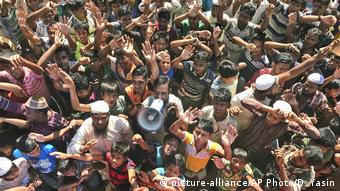 Sheikh Hasina's government has had to take care of over 700,000 Rohingya who fled from Myanmar's Rakhine state after a military crackdown on insurgents

On Rohingya refugees in Bangladesh

Besides raising living standards and balancing politics between liberals and fundamentalists, Sheikh Hasina's government has also had to take care of over 700,000 Rohingya, who fled from Myanmar's Rakhine state after a military crackdown on insurgents. Most of them now live under deplorable conditions in two camps in Cox's Bazaar district, near the Bangladesh-Myanmar border. This influx has had a serious impact on the region's social and economic fabric, with the newcomers fighting for survival and sometimes competing with locals for space, jobs and limited resources.

The Awami League government has been busy trying to find alternatives for rehabilitating the refugees. Hasina said that her country needs a mid-term plan for the thousands of Rohingya children who were born in refugee camps and for the youth, who are languishing without anything to do. "We have identified an island, where we have created a cyclone shelter and houses. We want to take them there and give them work, so that young men and women can do something and earn money," Hasina explained. 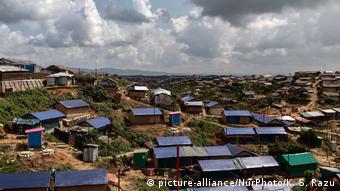 Most of the refugees now live under deplorable conditions in two camps in Cox's Bazaar district, near the Bangladesh-Myanmar border

In order to tackle the problem, Hasina said she wanted to maintain good diplomatic relations with Myanmar and that it was imperative that Bangladesh's neighbors China and India lend a helping hand. The European Union would also need to provide support, she said, above all in sending the refugees back to their country of origin.

"We do not want to fight with Myanmar. We are also trying to cooperate with China and India. But the pressure is increasing on Bangladesh," Hasina told DW, adding, "I think the international community, including the European Union, has some responsibilities (for repatriation). Their responsibilities should not be limited to only providing aid to Rohingya in Bangladeshi camps. Actually the same aid can be provided in Myanmar shelters once they are taken back."

The interview was conducted by DW's editor-in-chief Ines Pohl and head of DW's Asia department, Debarati Guha, in Dhaka.

Bangladesh is one of the world's impoverished nations. Yet, its economy has been growing rapidly over the past few years, thanks in no small part to its massive textile exports. But risks are looming on the horizon. (25.12.2018)

An attack on a prominent Bangladeshi editor, along with increased incidents of hacking and censorship, are all signs of an "imperiled" political environment in the run-up to Bangladesh's general election this autumn. (27.07.2018)