Why Bangladesh′s mainstream parties rely on Islamists | Asia | An in-depth look at news from across the continent | DW | 19.12.2018

Both the ruling and opposition parties in Bangladesh are courting Islamist groups to garner votes ahead of the upcoming general elections. But why has religion become so important for mainstream parties in the country? 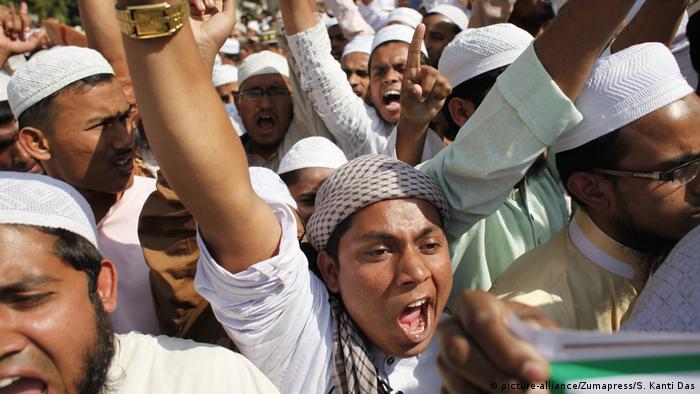 In March, 2005, Fazlul Haq Aminee, a firebrand Islamist, claimed that no party in Bangladesh would be able to come to power at the national level without the support from the madrassahs. These Islamic schools, which are spread across Bangladesh, have at least 1.4 million students that follow the Deobandi tradition, a conservative interpretation of Islam.

With the parliamentary election scheduled for December 30, the Grand Alliance (GA) and the Jatiyo Oikyo Front (JOF) are aggressively courting Islamists. Does that mean that Aminee's "prediction" has come true?

Islamists as political actors emerged in Bangladesh under military regimes between 1975 and 1990, as the generals lacked legitimacy and thus used religion as a tool to cement their power.

While the military regimes were responsible for bringing religion into politics, the political parties gave legitimacy to the country's Islamist groups.

Since the 1980s, the ruling Awami League (AL) party and the opposition Bangladesh National Party (BNP) have been courting Islamists for their electoral success, arguing that these groups help garner votes. But the available statistics do not support this argument.

In 1979, only two Islamist parties participated in the general election. By 1991, the number of Islamist parties in Bangladesh had increased to 17, with one more party joining mainstream politics in 1996. But in 2001, the number was reduced to 11 and in 2008 to 10. Their share of votes also dropped from a little above 14 percent in 1991 to around six percent in 2008.

One of the oldest Islamist parties, the Jamaat-e-Islami (JI) has been barred by the Bangladesh Election Commission from participating in the upcoming polls. Many of the JI top leaders have been convicted and executed by the International Crimes Tribunal of Bangladesh for committing war crimes during the nation's war of independence in 1971. The Islamist Oikya Jote (IOJ) has become fragmented over the years. On the other hand, the obscurantist Hefazat-i-Islam (HI) group, a self-proclaimed social movement with a conservative political agenda, has emerged on the political scene.

Currently, there are at least 70 active Islamist parties, 10 of which are registered with Bangladesh's Election Commission.

Since 2014, the BNP, headed by former Prime Minister Khaleda Zia, has been in a tough spot. Zia has been behind bars on corruption charges for quite some time. However, the BNP has joined the Jatiya Oikyo Front (JOF) under the leadership of Kamal Hossain. Some had expected that it would abandon its longtime Islamist ally, the JI.

Because of the ban, the JI could not field candidates for the upcoming elections, but the BNP nominated 22 JI-linked politicians to contest the vote from its platform.

On the other hand, the ruling AL has the backing from the Hefazat-i-Islam. Out of the 70 Islamist parties, more than 60 are close to the ruling party and its key ally, the Jatiya Party, headed by the former dictator-turned-politician H. M. Ershad. Surprisingly, the BNP, which many perceive as more sympathetic to Islamists, has only five within its fold.

A marriage of convenience?

But why has the AL, which many in the West consider a secular party, drifted closer to Islamists?

Experts say that one of the reasons behind the AL's ideological shift is the overall Islamization of Bangladeshi society in the past few decades. The newly emerged middle class in the Muslim-majority country leans toward political Islam and doesn't shy away from displaying its religiosity.

Since the controversial and one-sided elections in 2014 — boycotted by the BNP — Sheikh Hasina's party has lost much of its credibility. The AL thus is using the support from religious groups to prove its political relevance.

For religious parties like the HI, an alliance with the ruling party has been beneficial as they have more room to mobilize the masses.

Ali Riaz is a Distinguished Professor of Political Science at Illinois State University in the US.

Bangladesh: US to send election observers amid opposition concerns

Opposition groups in Bangladesh insist that a caretaker government holds the December 30 general election and that international observers be allowed to monitor the polls. Rights groups express concern over a fair vote. (01.12.2018)

A Bangladeshi court has sentenced ten Islamist militants to death over a failed attempt to assassinate Prime Minister Sheikh Hasina in 2000. The extremists belong to the banned Harkat-ul-Jihad al-Islami group. (20.08.2017)