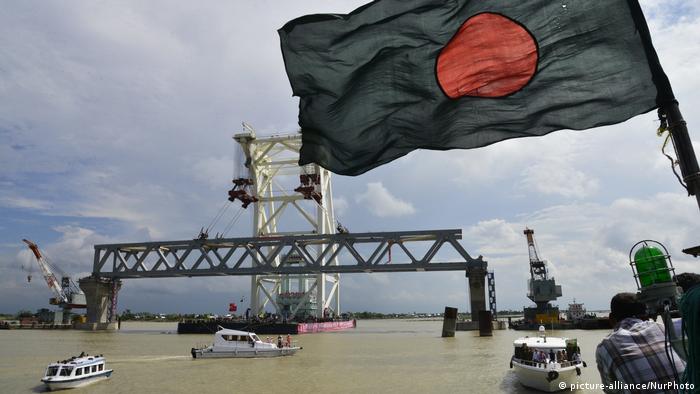 Bangladesh has been making progress and the country is so successful in many areas that it is a "role model for South Asia." These are not the words of Bangladeshi Prime Minister Sheikh Hasina, but the British business magazine Economist.

Bangladesh is going to the polls on December 30 to elect a new government and PM Hasina's Awami League (AL) party is pulling out all the stops to secure victory and retain power.

During the election campaign, ruling party members have repeatedly pointed to Bangladesh's robust economic development under the incumbent government and promised that, should they win, this trend will continue in the coming years.

The economy of the Muslim-majority nation, with a population of over 165 million inhabitants, has grown by an average of over six percent per year since 2008.

Last year, Bangladesh's gross domestic product (GDP) expanded by 7.3 percent, a faster rate than that of either India or Pakistan. Based on the US dollar exchange rate, Bangladesh's per capita economic output is now higher than in Pakistan, an impressive feat by the former.

Today, industry accounts for around 30 percent of the nation's GDP. In 1971, the year of the bloody struggle for independence from West Pakistan, the share of industry in what was then East Pakistan was less than seven percent.

In 1970, when a devastating cyclone killed hundreds of thousands of people, the country did not even have enough material to make shrouds for the victims, lamented Sheikh Mujibur Rahman, who went on to become the first prime minister of the newly founded state. Today Bangladesh exports more finished textiles than India and Pakistan combined, a remarkable turnaround.

Bangladesh fares far better in some aspects of human development than its larger neighbors like India and Pakistan. Child mortality, for instance, is lower in Bangladesh. The country also does better than India and Pakistan when it comes to child literacy and life expectancy. According to data from the Global Hunger Index, published by the International Food Policy Research Institute in Washington, 26.5 percent of the Bangladeshi population suffered from hunger last year. This shows the acute problems the country still faces.

Nevertheless, the starvation rate in Bangladesh today is half as many as in 1992, when it stood at around 53.6 percent. Moreover, fewer people are starving there than either in India (31.4 percent) or Pakistan (32.6 percent).

A key factor in economic success is demographic development. While the birth rate in Pakistan was as high as 3.5 children per woman in 2016, the figure in Bangladesh stood at 2.1, a lower rate than even in India (2.3). "The country is a prime example of successful development policy and is indeed far better off than it was a decade ago," Wolfgang-Peter Zingel, an economist at the South Asia Institute of the University of Heidelberg, told DW. 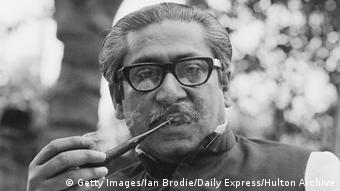 The government has ambitious plans to develop the country further. These include major infrastructure projects such as the construction of a new bridge over the Ganges River, which is called Padma in Bangladesh. The more than six-kilometer-long structure, on which cars, trucks and trains are to roll from 2019, will shorten the journey time between the southeast, north and east of the country by several hours. So far, all private and freight traffic between the two parts of the country, which are separated by major rivers, has had to be handled by ferries.

Minister Obaidul Quader, who is responsible for road traffic and bridges, estimates that the four-lane and two-storey Padma Bridge will boost trade and the economy considerably, accelerating the country's GDP growth by 1.5 to 2 percent. The Padma Bridge and several other highway projects in the country are being built with Chinese support. But China doesn't always end up as a winner in Bangladesh.

"Since the Chinese government unveiled its gigantic new Silk Road project five years ago, China, India and Japan have been competing for access to the northern Bay of Bengal," explained Samuel Berthet, who teaches at Shiv Nagar University in India.

"In April 2015, the Bangladeshi government, which is friendly to China, decided to let Japan build the deep-water port in Matarbari, almost 100 kilometers south of Chittagong. Meanwhile, a Chinese conglomerate, which should have been commissioned with a similar port project further south, in Sonadia, had to finally leave empty-handed," says Berthet.

Read more: Bangladesh election: what you need to know

The reason for this was not least the consideration given to India, which has invested about $7 billion (€6.16 billion) in Bangladesh over the past decade as part of New Delhi's efforts to improve connectivity to India's underdeveloped northeastern states.

Beijing's plans to invest $30 billion (€26.39 billion) in Bangladesh's infrastructure over the next few years draw mixed feelings in New Delhi. Compounding Indian policymakers' skepticism is Saudi Arabia's plan to finance the construction of around 560 mosques in Bangladesh in the coming years. 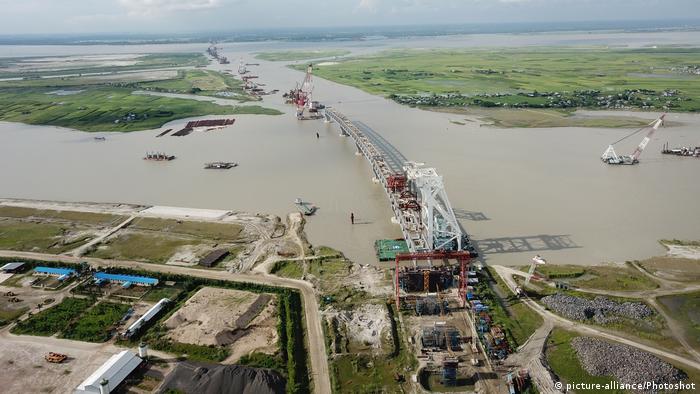 Photo taken on June 29, 2018, shows the construction site of the fifth span of the Padma Bridge on the outskirts of Dhaka

Bangladesh is an important supplier of textiles to America and European nations like Germany. "After the US, Germany is the second-largest buyer of finished textiles from Bangladesh," said Wolfgang-Peter Zingel. "But clothes are not strategic products. Bangladesh would be easy to replace. It's a classic asymmetric relationship," he added.

According to Zingel, Germany is an important partner for Bangladesh in the area of development cooperation, which also gives Berlin a certain leverage in bilateral relations.

"We are one of the most important donors. Bangladesh is a good example to prove that development aid works. It's not only the economic growth, but also the comparatively good human development indicators that prove that," the expert stressed. In addition, Bangladesh is "relatively democratic in comparison with other Muslim-majority countries," Zingel said.

"There is also co-education at all levels  boys and girls are generally taught together in Bangladesh."

The Bangladeshi government aims to take the country out of the group of the poorest and underdeveloped countries by 2021, the 50th anniversary of the nation's independence from Pakistan.

To that end, the government has even launched a program called "Vision 2021," setting, among other things, the "Digital Bangladesh" action plan as one of the priorities.

In addition to progress in education, health and gender equality, Bangladesh is experiencing a growth spurt that has reduced poverty and doubled per capita income. The government deserves praise for creating the essential conditions for the private sector's dynamism that has boosted economic growth," said Syed Al-Muti, associate director for the Economic Development program of the Asia Foundation, a San Francisco-based NGO.

"The solid economic development of recent years is based on three pillars: the growth of agriculture, the export success of the textile industry and the remittances from Bangladeshis abroad," noted Zingel.

Despite the successes, the expert warned, risks loom large as the country is heavily reliant on the global economic trends, the employment of Bangladeshis, particularly in Gulf States, and the willingness of other countries to buy "Made-in-Bangladesh" garments. "There is a lack of diversity when it comes to Bangladesh's exports," Zingel said.

Adding to the uncertainties are problems related to climate change and their ramifications for Bangladesh, a country that experts say will be among the most affected places in South Asia.

"Dhaka is already one of the largest cities in the world; it is the largest and fastest growing poor city," Zingel said.

The expert also points out that the greater Dhaka area, where the textile industry is concentrated, has a completely different dynamic: "The around five million workers employed by the sector are mostly female and come from rural families. This is expected to lead to social and cultural change that should not be underestimated."

Bangladesh is scheduled to hold a general election on December 30, a vote that is seen as crucial for the survival of democracy in the South Asian country. Follow DW's coverage of the pivotal elections right here. (11.12.2018)

Both the ruling and opposition parties in Bangladesh are courting Islamist groups to garner votes ahead of the upcoming general elections. But why has religion become so important for mainstream parties in the country? (19.12.2018)

Bangladesh: Press freedom in danger ahead of election