Former UKIP leader Nigel Farage has promoted the cause of #Irexit, or an Irish exit from the EU, in Dublin. His message, praising Donald Trump, was that Irish euroskeptics should use controversy to subvert the media. 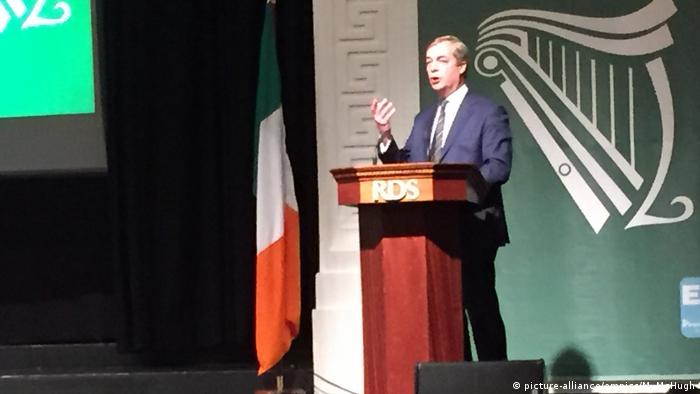 It might not appear that credible, but the movement to take Ireland out of the European Union has been stirring of late.

Indeed, a conference advocating an Irish post-Brexit split from Brussels did garner the nation's attention on Twitter. Within Ireland, the hashtag #Irexit trended in second place — only just below the #IREvFRA tag for the country's opening match in the Six Nations rugby tournament.

The hashtag #Farage also made a showing, as the former UK Independence Party leader prepared to address those gathered for the free event at the Irish capital's Royal Dublin Society on Saturday.

Farage was in Ireland to espouse the benefits of leaving the EU as part of a conference organized by the European parliament's Europe of Freedom and Direct Democracy (EFDD) political grouping, of which Farage is a part.

Read more: Brexit Diaries 24: An elephant in the room

The prospect of a British right-winger like Farage addressing an Irish crowd about independence didn't compute for some. The welcome was not entirely warm.

One group — using the Irish independence slogan "We serve neither King Nor Kaiser But Ireland" — was very much in favor of Irexit. Farage, however, was seen as representative of a much older foe.

But, being the divisive figure he is, Farage also had a more receptive audience.

As well as noting the presence of several "Make America Great Again" hats in the predominantly male audience, Richard Chambers, a reporter with Irish radio station Newstalk, tweeted that a significant number of those present appeared to be from the UK.

In the build-up to Farage's speech, right-wing journalist and sometime Eurovision Song Contest entrant John Waters railed against the media, multiculturalism and a perceived lack of loyalty on the part of immigrants to Ireland.

The media were made to feel a little uncomfortable, according to RTE journalist Stephen Murphy.

Murphy also caught Farage's entrance, ahead of a speech that would see the sitting MEP also attack the media, and urge Irish euroskeptics to play with controversy to dominate the news.

"Whatever the mainstream media say about a new political movement in this country that is standing up for the right values, it doesn't matter," Farage told the room. "There's a chap in America who's proved this to a certain extent. "Whether you like 'The Donald' or not is not the point, but what did he do? He courted as much controversy as he possibly could  because controversy means you get more front-page headlines and you dominate the news agenda."

Farage also praised Trump for his use of social media, specifically Twitter.

"By using Twitter he goes around the back of the political class, the media class, and the big business class. He reaches straight to American men and women and voters and he's now got 47.6 million followers."

The speech was upset at one point by a protester armed with an EU flag, whistling the European anthem Ode to Joy.

He was fairly quickly bustled away. This wasn't surprising, as those obtaining tickets for the event were warned it was "open only to supporters of an [sic] Irish Exit from the European Union" and that "unwelcome interjections from the audience may result in removal from the event."

As things on Saturday unfolded, one Twitter user suggested that, while Europe might not be perfect, Farage — still accused by many of whipping up xenophobia to aid his cause — may not be the best ally for Ireland.

A day earlier, in a speech to the Trinity Historical Society, Farage had complained that there had been "so little debate" on the subject of Irexit. That caused Mairead McGuiness, Vice President of the European Parliament and a member of the center-right Fine Gael party, to ask why Farage had declined an invitation to talk about the issue on Ireland's iconic debate platform The Late Late Show.

Farage has promised to take part in future events in Ireland, which currently has no MEPs from his EFDD grouping in Brussels. Elections for the European Parliament take place next in 2019, when Farage loses his UK seat in the parliament after 20 years.

Brexit Diaries 20: Theresa May has to square the Irish circle

Lonely UK Prime Minister Theresa May has no clothes, a former political rival speaks his mind and the hour of historical revenge finally arrives for the Irish. (05.12.2017)