Leading Brexiteer Nigel Farage has said he might support a referendum redo to end debate on the UK leaving the European Union. The prime minister's office replied that Britons wouldn't be going back to the Brexit polls. 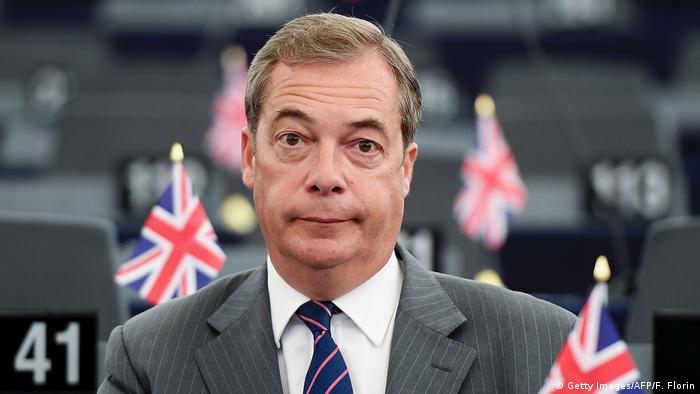 After leading the 2016 campaign for the United Kingdom of leave the European Union — and winning the vote by 52 percent to 48 percent — Nigel Farage hinted that he could be open to holding a second referendum to "kill off the issue for a generation once and for all."

Remain proponents like Blair "will go on whinging and whining and moaning all the way through this process. So maybe, just maybe, I'm reaching the point of thinking that we should have a second referendum on EU membership," Farage said Thursday on the Chanel 5 show The Wright Stuff.

"The percentage that would vote to leave next time would be very much bigger than it was last time around," he said. "And we may just finish the whole thing off and Blair can just disappear off into total obscurity."

Those sentiments were echoed Thursday by Arron Banks, co-founder of the influential pro-Brexit campaign group Leave.EU, who said a second referendum would confirm public support for a clean break with Brussels.

"True Brexiteers have been backed into a corner and the only option now is to go back to the polls and let the people shout from the rooftops their support of a true Brexit," Banks said in a statement. "Leave would win by a landslide."

It appears unlikely the public will ever find out if that will really be the case though. A spokesperson for Prime Minister Theresa May on Thursday reiterated the government's stance that "Brexit means Brexit" and that there would not be a second referendum on British membership in the EU.

Brexit negotiations in Brussels have moved past their first phase dealing with borders, citizens' rights and divorce payments and are set to begin discussing future relations between the EU and UK, as well a transition phase after the final exit, scheduled for March 29, 2019.

Ahead of the Brexit vote, when polls showed a narrow win for the Remain camp, Farage had told the Daily Mirror newspaper: "In a 52-48 referendum this would be unfinished business by a long way. If the Remain campaign win two-thirds to one-third that ends it."

Until Thursday, he had not called for a second vote to give politicians a clearer mandate to leave the still 28-member bloc.

Liberal Democrats and some other pro-EU opposition politicians have called for a second referendum, often arguing that Britons did not know the full implications of leaving the EU when they voted.

In the same Wright Stuff interview on Thursday, Farage also praised US President Donald Trump, saying "he's very smart and he's doing a very good job" and said former presidential adviser Stephen Bannon "has been one of the great political brains of the modern time."