Prominent Brexit advocate Nigel Farage has claimed pro-leave sentiment is on the rise in the UK. Following a meeting in Brussels, he accused the European Union's chief negotiator of failing to understand Brexit dynamics. 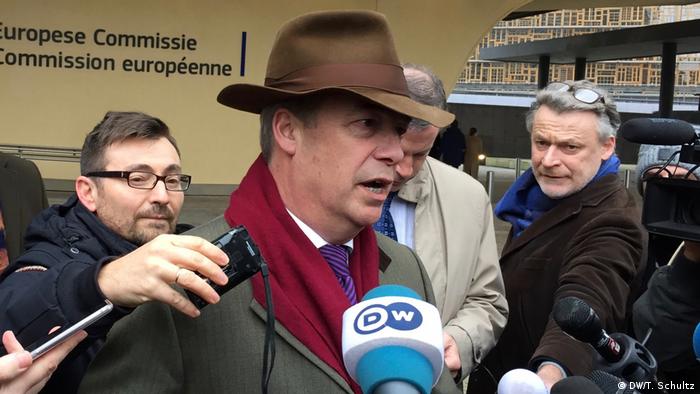 "I wouldn't say it's a happy New Year for the Brexit deal." That's how euroskeptic Nigel Farage summed up his Monday morning meeting with the European Union's chief negotiator, Michel Barnier. The British right-wing member of the European Parliament emerged quipping that at least he'd been served coffee, but for him that seemed to be the only positive note in the 40-minute rendezvous.

Farage said he'd suspected the British government had not been fairly representing the views of the "17.4 million" Brexit voters and that "this meeting completely confirmed that."

Posting his own video after the meeting, Farage concluded Barnier had been left in the dark as to why British voters want out of the bloc and "doesn't understand for one moment" that opposition to immigration was one of the major motivations for the vote to leave. 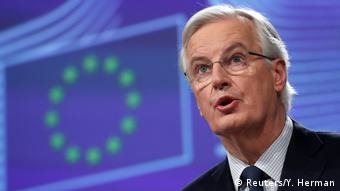 "It's perfectly clear the British government hasn't even discussed the matter with him so far," Farage said.

Farage said the debate on the future borders between the EU and the UK has been given short shrift in negotiations, despite being "front and center" in the minds of Brexit voters, and had so far gotten "nowhere."

The long-time critic of the EU said he'd been driven to ask Barnier for the meeting after seeing so many "pro-remain" figures — whom he referred to as "remoaners" — visiting European Commission headquarters that it should qualify as "collusion."

But Barnier advisor Stefaan De Rynck told Farage via Twitter that he was hardly the first or the only Brexiteer to meet the top EU negotiator, and advised Farage to "tone it down."

EC spokesman Margaritis Schinas wouldn't even give the meeting that much attention. Asked at Monday's daily briefing what Barnier's motivation was for the sit-down, given that Farage is essentially just a former head of the United Kingdom Independent Party (UKIP) and not actually involved in the process, he simply said the bloc's Brexit negotiator occasionally meets with lawmakers to discuss the state of play, but would not comment further.

Farage on Monday spoke through Brussels reporters to Britain's euroskeptic base, accusing the EU of unfair bargaining and warning that this is already bringing the possibility of a "no deal" closer to reality. "In terms of getting a trade deal on goods, that's desperately easy," he said, citing the EU's large trade surplus with the UK. "But when you come to the concept of services or financial services, [Barnier's] whole appearance changes and it's just kind of 'no, this isn't going to happen.'"

Farage said the EU must be willing to offer more than is currently on the table if it doesn't want UK businesses to say "let's not waste our time and go through years of agony with this — let's just revert to WTO [World Trade Organization] rules" and forgo an arrangement with Brussels.

He said it's not just companies but also individuals who are warming to the "no deal" idea, claiming a "significant chunk" of the population has become pro-Brexit post-referendum. "All the British economic indicators at the end of [last] year were way better than anybody predicted," he said. News agency Reuters concurs the British economy did avoid the worst doomsday scenarios after the Brexit vote and will continue to expand slowly in 2018, though it is lagging behind the eurozone.

Farage said the possibility of a long transition period is unacceptable to hardcore leavers, although the British government itself has announced, for example, that it would continue subsidizing its own farmers even longer than the envisioned post-Brexit period. "We didn't vote to sort of kick this into the long grass," he complained, "so that it's at least going to be six years from Brexit before we can sign a trade deal with anybody else or have any degree of control over our borders with the rest of the European Union."

He suggested the latest British cabinet reshuffle by Prime Minister Theresa May was to prepare for a "no deal" eventuality, a prospect that brought a quick and furious response from Scottish leader Nicola Sturgeon, who's campaigning to reverse Brexit.

Farage said the UK would be fine if it left the EU without any trade arrangements. While "easier" in the short term to have an agreement, he said, in the long run there would not be a problem because the country will be free to pursue "global opportunities" as it wishes.