Iraqi Report Could Prove Damaging to Germany | News and current affairs from Germany and around the world | DW | 17.12.2002

Iraq’s declaration of its weapons programs contains explosive news for Germany, a Berlin paper has reported. The dossier is said to detail covert arms deals between German defense firms and Iraq. 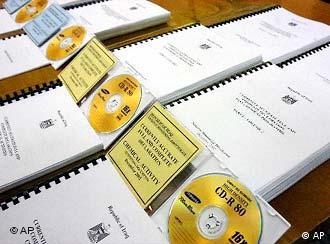 Volatile information - the weighty Iraqi report on its weapons program

Just as the heated debates within the German government over the role of German troops and equipment in a possible war against Iraq seem to be cooling down, another potential bombshell threatens to reignite the fires.

On Tuesday, the Berlin-based left-wing paper, Tageszeitung reported that aspects of the 12,000-page Iraqi report on Iraq's weapons programs, submitted to the U.N last week, could prove highly embarrassing for Germany.

The newspaper - believed to be the first to have access to the top-secret dossier - has written that the Iraqi declaration contains the names of 80 German firms, research laboratories and people, who are said to have helped Iraq develop its weapons program.

The most contentious piece of news for Germany is that the report names it as the number one supplier of weapons supplies to Iraq. German firms are supposed to easily outnumber the firms from other countries who have been exporting to Iraq.

They have delivered technical know-how, components, basic substances and even entire technical facilities for the development of atomic, chemical and biological weapons of mass destruction to Iraq right since 1975.

In some cases, conventional military and technical dealings between Germany and Iraq are said to date till 2001, ten years after the second Gulf war and a time when international sanctions against Saddam Hussein are still in place.

The paper reports that the dossier contains several indications of cases, where German authorities right up to the Finance Ministry tolerated the illegal arms cooperation and also promoted to it to an extent.

The German Finance Ministry has said that it will react to the report only once it has studied the Iraqi declaration.

"We’ll first wait till the report is in our hands," a spokesman from the ministry said on Tuesday.

The spokesman however said that the German government of the time in 1990 had informed the parliament about such German supplies to Iraq.

Ever since Iraq invaded Kuwait in 1990, there has been a strict embargo against the country. The spokesman said that there have been a few cases of violation of the embargo and the government has initiated investigations.

Explosive as the newspaper report may appear, it’s not the first of its kind.

For months rumors have been circulating in the German media of murky deals between German arms companies and businessmen with Iraq despite the rigid embargoes in place.

In October this year, a magazine of the German radio channel, Südwestrundfunk reported that electronics giant Siemens had delivered specialized technical equipment to Iraq for the treatment of kidney stones, but which could also under certain circumstances be used as a detonator for atom bombs.

Siemens insisted that the device could not be misused because it had commissioned an Iraqi company to regularly monitor the equipment. In fact the delivery was even sanctioned by the sanctions council of the U.N. and the Federal Office of Economics and Export Control (BAFA).

The latest newspaper report also touches upon the gray zone between medicine and armaments and writes of so-called dual-use goods that can be used for developing weapons as well as for civilian purposes.

The German government was apparently informed in 1999 of the delivery of such dual-use goods to Iraq, but is said to have turned a blind eye.

German arms companies in the meantime have been conducting booming business with Iraq in recent years. According to the German Federal Statistics Office, German military exports to Iraq have been steadily rising from year to year.

From annual exports amounting to 21,7 million euro in 1997, the volume of exports for the following year shot to some 76,4 million euro. The trend continued in 2001 with exports to Iraq bringing German firms profits in the range of 336,5 million euro.

German goods worth 226,2 million euro have already been shipped to Iraq in the first half of this year. Some of the official heavyweights in the export scene are the German electronics firm Siemens with medical equipment and energy distribution systems and carmaker DaimlerChrysler. Both are reported to rake in revenues worth double digit figures in the millions.

Though the German government has not officially reacted to the Iraqi declaration detailing its role in supplying Iraq with arms, there is little doubt that the issue is bound to stoke passions.

Ever since Chancellor Gerhard Schröder refused to be part of any military action in Iraq before the German general elections in September, Berlin’s relation to Washington has been a strained one. 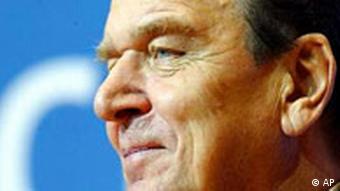 With Schröder sticking to his pacifist line, but dithering over the level of cooperation with the U.S. in the case of a war against Iraq, the latest report is guaranteed to provide ammunition to the opposition who have strongly criticized Schröder’s policy towards America.

Another real fear is that Schröder’s image as a staunch pacifist might now be sullied if it emerges that Germany has all along been helping the very leader who it has been unwilling to topple, to stockpile his weapons.

The report could also provide the U.S. with an excuse to step up the pressure on Germany to give in to American military demands for deployment of German troops and use of German military equipment in the case of a military attack on Iraq.

Germany will join the United Nations Security Council team as a non-permanent member next year and head the Sanctions Committee on Iraq, a position that could place it at odds with its own stated foreign policy. (December 16, 2002)