Iraq asks Germany for help in fight against 'Islamic State'

Iraqi PM Haider al-Abadi has asked German Foreign Minister Frank-Walter Steinmeier for further assistance in the fight against the "Islamic State," saying terrorism is "not only a threat to Iraq, but also to Europe." 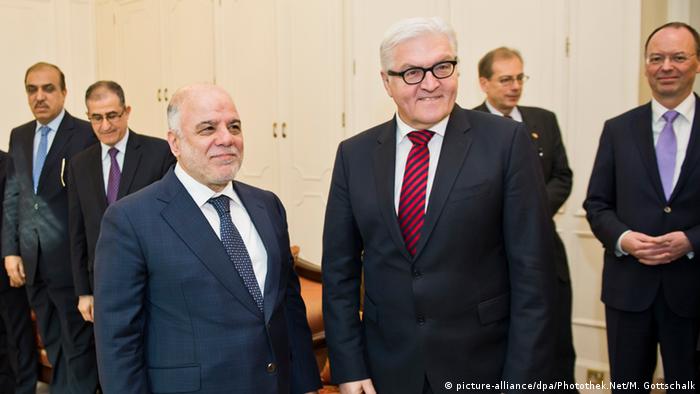 In a meeting with German Foreign Minister Frank-Walter Steinmeier in Baghdad on Monday, Iraqi Prime Minister Haider al-Abadi requested that Germany play a more active role in the fight against the so-called "Islamic State" (IS).

The dpa news agency reported that the Iraqi premier had in particular asked the German government to provide help with troop training. German forces in Iraq are currently training Kurdish soldiers in the country's autonomous north.

"The threat of terrorism is not only a threat to Iraq, but also to Europe," said al-Abadi, speaking with dpa.

Steinmeier's visit to Iraq had not been publicly announced before his arrival over security concerns.

Violence spilling over from Syria

The visit between Steinmeier and al-Abadi served as a showcase to highlight recent gains made in the ongoing battle between the Iraqi government and IS jihadist insurgents. Several cities previously controlled by the "Islamic State" have recently been liberated, though militants have overrun swathes of territory elsewhere in recent months.

IS, which at one point claimed it had gained power over almost half of Syria, has also managed to increase its control in Iraq's second-biggest city, Mosul, after taking the city last year in a major victory for the extremist movement. Around 250,000 Syrian refugees have also fled civil war to neighboring Iraq.

Steinmeier assured al-Abadi that he did not take "the tasks that stand before you and the international community" lightly, adding that he had "listened carefully" to the request. He did not make any specific commitments related to the fight against terror, but did announce plans for Germany to help build five field hospitals in the recently-liberated territories.

Al-Abadi's request came hot on the heels of the German parliament signing off a major military support role in combating IS in Syria, assisting the international coalition's airstrikes with logistics and reconnaissance. The military campaign will also see the deployment of 1,200 German troops to the region.

"The stabilization of Iraq is just as important as the search for a political solution in Syria," Steinmeier said upon his arrival in Baghdad on Sunday.

Germany's Gabriel says 'Islamic State' 'can and must' be destroyed

German Vice Chancellor Sigmar Gabriel has told a newspaper that the aim of military intervention in Syria is to stop the advance of 'IS.' NATO's secretary-general has also called for the jihadi group to be destroyed. (06.12.2015)