"Our enemy is right here," demonstrators chanted as they took to the streets of Tehran for the second day. The UK ambassador has denied taking part in the protests and decried his arrest, saying it was illegal. 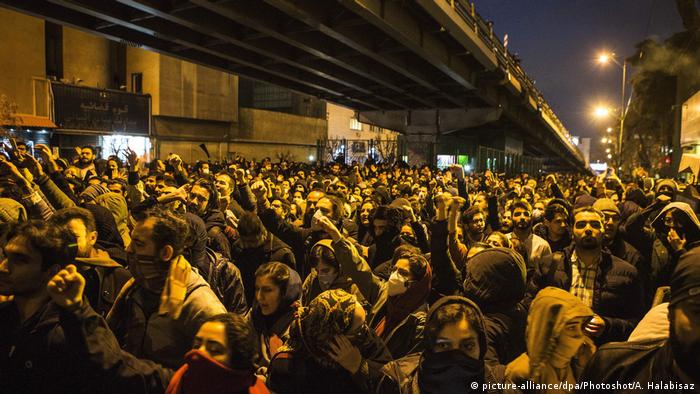 Protests took place across Iran on Sunday for the second day in a row following revelations that the fatal crash of a Ukrainian passenger jet was caused by an Iranian surface-to-air missile. Riot police and soldiers were deployed in large numbers around the capital, Tehran, especially to key sites like Vali-e Asr Square and university campuses.

About 3,000 people took part in protests at Azadi Square in western Tehran, while hundreds more convened on university campuses. Protesters called for the resignation of many members of Iran's ruling elite.

It appeared that much of the nationalist sentiment that the government had hoped to capitalize on following the assassination of General Qassem Soleimani by US forces in Iraq has begun to evaporate, particularly as the Revolutionary Guards did not admit their role in the airplane tragedy until Canada, the US and the UK announced they had evidence the jet was downed by a missile.

"They are lying that our enemy is America; our enemy is right here," protesters chanted outside a university in Tehran.

On Saturday, a group of protesters were hit with tear gas by the police after saying "death to the dictator," referring to the Islamic Republic's Supreme Leader Ayatollah Ali Khamenei.

The aircraft was shot down on Wednesday, hours after Iran launched a missile attack on two US air bases in Iraq.

Iran also indicated on Sunday that a de-escalation of tensions between Iran and the US could be the only way forward.

"We agreed... that the only solution to these crises is de-escalation from everyone and dialogue," said Emir Sheikh Tamim bin Hamad Al-Thani of Qatar, after diplomatic talks with Iranian President Hassan Rouhani on Sunday.

On Twitter, US President Donald Trump called on Iranian security services not to react violently to protests, referencing the hundreds of demonstrators who died in anti-government actions in the fall.

Later he tweeted that he "couldn't care less" if Iran agrees to negotiate with the US, but also urged Iran: "don't kill your protesters."

US Defense Secretary Mark Esper told media minutes before the president's tweet that Trump was still keen to hold negotiations.

"We're willing to sit down and discuss without precondition a new way forward, a series of steps by which Iran becomes a more normal country," he told US broadcaster CBS.

All 176 passengers and crew lost their lives after Ukrainian Airlines flight 752 was shot down shortly after takeoff. Eighty-two people on board were Iranian. Initially, the government had claimed that a technical fault had caused the crash, until it emerged that it had been shot down after it flew close to a sensitive military site, where personnel say they mistook it for a US weapon. Just four hours earlier, Iran had launched airstrikes against US targets in Iraq.

At the same time, the hard-line Basij militia staged its own demonstration outside the UK Embassy in Tehran. The ambassador has been summoned by the Iranian Foreign Ministry for allegedly taking part in an anti-government demonstration on Saturday.

Ambassador Rob Macaire has denied taking part in the protest, saying he was told the event would be a vigil for the victims of the plane crash. He said he left after five minutes, but he was later arrested and then released.

"Arresting diplomats is of course, illegal, in all countries," he wrote on Twitter.

Germany's Foreign Office has also condemned the arrest, calling it "a completely unacceptable violation of international law. We strongly condemn this action."