Iran condemns US airstrikes in Syria

The Islamic Republic has accused the US of carrying out aggressive illegal activity. Scores of pro-Iran militiamen were killed in an airstrike on Syrian soil on Thursday. 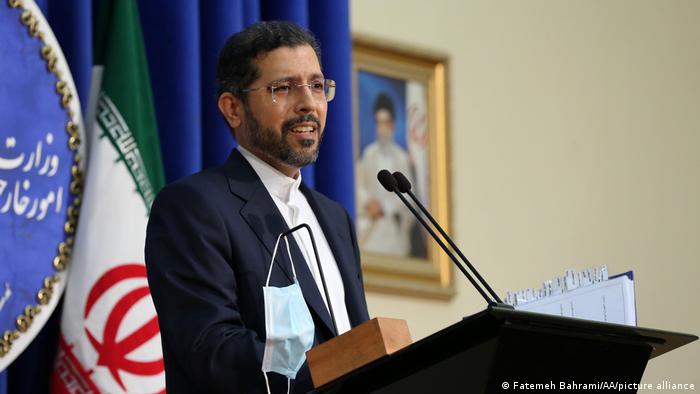 Iran's Foreign Ministry condemned airstrikes carried out by the US military against Iran-backed militia facilities on Thursday as "illegal," a statement published on Friday said.

Saeed Khatibzadeh, a spokesperson for the Foreign Ministry, considered the attack a "clear aggression against Syria's sovereignty and territorial integrity" and a "violation of international law."

Khatibzadeh also claimed that the strikes would worsen the conflict in the war-torn country and lead to further instability.

He went on to accuse the US of having illegal bases in Syria which it uses to train "terrorists," and of attempting to occupy the country to gain access to its natural resources.

The Day with Phil Gayle: A Prince's Passing

Syria's Foreign Ministry also condemned the attack, calling it "cowardly American aggression," and a "bad sign" from the new US administration, AFP reported.

Why did the US conduct airstrikes in Syria?

The UK-based Syrian Observatory for Human Rights reported on Friday that the number of casualties from Thursday's attack had risen to 22. More casualties were expected as other fighters had been injured, some seriously.

The organization also said the aerial strikes had targeted the positions of two Iraqi groups backed by Iran as well as a munitions shipment that was crossing into Syria from Iraq.

The US attack, the first under President Joe Biden's administration, was in retaliation for a rocket attack against a US military base in the Kurdish-run northern region of Iraq that left one foreign contractor dead and wounded several US and coalition troops.

How are the relations between the US and Iran?

Tensions between the Islamic Republic and the US have remained turbulent following Biden's inauguration. Relations between the two nations hit a low point during the Trump administration, especially following the assassination of an Iranian top general by the Pentagon in January 2020.

Trump also pulled the US out of the joint nuclear deal with Iran and several other powers and reimposed sanctions on Tehran. While Biden has shown a willingness to return to the deal, hardliners in Iran have demanded greater concessions, such as the removal of all sanctions, before opening negotiations.

Syria is just one zone of contention — the US and other powers are also concerned about the development of Iran's uranium enrichment program and its support for Houthi rebels in Yemen.