International Year of Biodiversity tries to rescue the Copenhagen catastrophe | World| Breaking news and perspectives from around the globe | DW | 04.01.2010

International Year of Biodiversity tries to rescue the Copenhagen catastrophe

After 2009 closed with a failed climate conference in Copenhagen, the New Year offers a new environmental issue of world-ending importance. But will the International Year of Biodiversity make any difference? 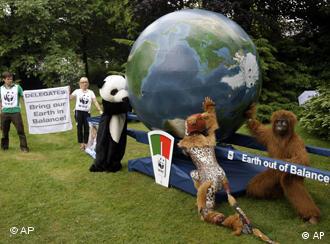 It will be an important year for environmental activists

In 2010 the world will have to get used to another obscure scientific concept prophesying an apocalypse. The United Nations has designated this year as the International Year of Biodiversity (IYB), and many will greet the idea wearily, expecting another year of well-meaning conferences and targets that will end inevitably with some obscure agreement diluted into irrelevance.

On top of this, where the climate change issue at least had a cause-and-effect certainty that could easily be illustrated in the media, the decline of biodiversity, and its link to human life is much more complex. 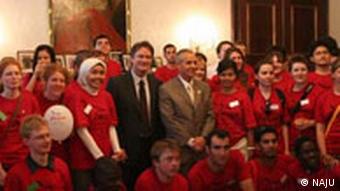 Ahmed Djoghlaf remains optimistic despite the failure of Copenhagen

The website of the office of the Convention on Biological Diversity (CBD) - the coordinating agreement behind the IYB - offers some 'Communications Guidelines' to help its campaigners convey their message in 2010.

Among these is a description that tries to explain the link between the variety of life on Earth and our own survival: "You are biodiversity," it reads, esoterically, "Most of the oxygen you breathe comes from plankton in the oceans of the world and lush forests around the globe. The fruit and vegetables you eat were likely pollinated by bees, and the water you drink is part of a huge global cycle involving you, clouds, rainfall, glaciers, rivers and oceans."

Magnus Wessel, biodiversity specialist of the German environmental group NABU, has a more succinct definition: "Basically the more life there is, and the more different types of life there are, the better it is for humanity," he told Deutsche Welle.

It is this dependence of human life on the natural world that is the central message of the CBD's global campaign for 2010.

A year to convey the message

That is why, according to CBD spokesman David Ainsworth, the decision was made to devote a whole year, rather than have a single day of fanfare to highlight the problem of the decline of biodiversity. "The variety of life on Earth is really the foundation of why we live here, and we felt that we needed a whole year for people to come to understand it," he told DW. "We needed a year to allow people to discover the biodiversity around them, to think a little bit about how their actions impact on the life around them, and to take the steps needed to change it."

It is a message that is difficult to explain because it depends on an even wider historical perspective than climate change. The human impact on the climate can be linked to the last 200 years or so - the age of industrialization. But scientists see the decline of biodiversity as something that may have begun 12,000 years ago - when humanity's first civilisations arose.

This period has been given the forbidding title "the Holocene extinction" - the age when humanity waged a conscious and unconscious war against other species, and accelerated natural extinction rates to absurd levels. Today, experts tell us, we are destroying 140,000 species every year - by 2050 up to 30 percent of species on Earth will have gone.

Read more on the year of biodiversity

The dangers of urban life

But it is a difficult message to convey when half of the world's population lives in a city, shielded from nature, accepting delivery of all its neatly packaged goods unaware of where they come from. Cities are a major part of the problem, says CBD executive secretary Ahmed Djoghlaf. They represent not only humanity's illusory independence from nature, but unceasing urbanization is a major factor in the destruction of nature.

By 2050, Djoghlaf estimates, two-thirds of the world's population will live in a city. "We are living now in a more and more urban environment at the expense of nature," Djoghlaf told Deutsche Welle. "And therefore we believe that the battle for life on Earth will be won or lost in the cities in the coming years."

For this reason, a raft of programs and summits involving hundreds of mayors have been organized, in order to bring what is a huge, abstract global issue to a local level. It is, after all, a real danger that the scale of biodiversity will be enough to discourage and defeat individuals.

Like the UN itself, the IYB is so vast and inclusive as to be almost meaningless. And the public is especially tired of these impotent, well-meaning words in the wake of Copenhagen. 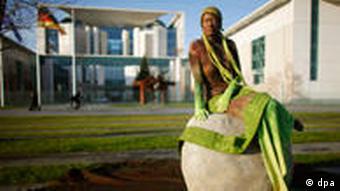 Wessel admits the problem: "After Copenhagen and all the media attention that the climate issue received, you can certainly be a little skeptical and ask, what do these big focus issues actually achieve, when at the end of it all politicians don't do what the public demands and what reality demands. So I can understand when people look at the IYB and ask skeptically, what good is this exactly?"

The standard, and maybe the only, answer is: if it serves no other purpose, it will at least make people aware of the problem of the decline of biodiversity. This is not much better than admitting defeat, and there are further reasons for pessimism when one takes into account the specific reason why 2010 was chosen.

The CBD treaty was signed at the Earth Summit in Rio de Janeiro in June 1992. Ten years later, at the World Summit for Sustainable Development in Johannesburg in 2002, a target was set - to halt the decline of biodiversity by the end of 2010.

But despite the snazzy 'Countdown 2010' website with its live target clock, everyone concerned knows that we have already missed this target. There is absolutely no hope of halting the decline by the end of this year. Depressing and absurd as this may be, the CBD argues that the countdown has another significance.

By the end of 2010, it is hoped, thanks to the countless scientific conferences and political forums taking place in Berlin, Paris, Bali, Nairobi, New York and many other cities and countries, there will be a concrete set of programs that will tackle the problem locally, but on a global scale. This is a lot more than just a publicity campaign.

Djoghlaf is optimistic because this is a completely different challenge than the Copenhagen conference, which was so high profile that international power struggles played such a significant part. It could even be an advantage that so many decisions will be made below most people's radar. Djoghlaf believes that it is also a very different process than the target set at the 2002 Johannesburg World Summit.

"To be frank, the 2010 target was a political statement - to substantially reduce the rate of loss of biodiversity by 2010," Djoghlaf says, "This decision was taken in 2002 without any identification of the means of implementation - how you want to do it."

This, the CBD claims, is the key distinction. At the start of the last decade, our governments simply said they wanted to do something. Eight years later, they are being forced to make an action plan. We will have to wait and see if it makes a difference.

As Copenhagen enters the last scheduled day of negotiations, world leaders will meet to try and finalize a deal. Hopes for success are largely being placed on an agreement between China and the United States. (18.12.2009)

At most international summits, it's usually the rich industrialized countries who grab the attention. But now, at the Copenhagen summit, developing countries have been raising their voices, and they're getting louder. (16.12.2009)