Copenhagen Accord is branded ″abject failure″ by activists | World| Breaking news and perspectives from around the globe | DW | 19.12.2009

After two weeks of discussion in Copenhagen, an outline plan to tackle climate change was finally hammered out. But the deal has been strongly criticized for not setting tough limits on emissions. 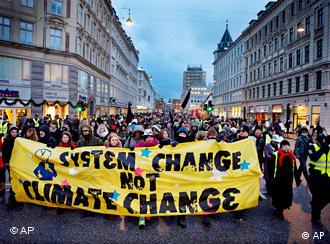 Activists are disappointed that the deal has not set firm limits

The outcome of the Copenhagen summit has been branded an "abject failure" by environmentalists and "a betrayal" by developing countries.

The Copenhagen Accord, which recognizes the need to limit global temperature increases to two degrees centigrade, was effectively passed after angry discussions at the Danish capital's Bella Centre.

But it prompted criticism for not setting tough, legally binding limits on future climate emissions for the 193 nations present.

Friends of the Earth said the conference had been an "abject failure", adding that the effects of global warming would be felt most by the poor.

"Rich countries have condemned millions of the world's poorest people to hunger, suffering and loss of life as climate change accelerates," said international group chairman Nnimmo Bassey adding that the blame rested "squarely on the shoulders of developed nations." 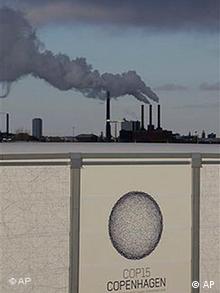 The summit was close to collapse during the week

Greenpeace condemned conference participants for failing to achieve a meaningful deal and likened representatives to criminals "fleeing to the airport in shame."

"World leaders had a once in a generation chance to change the world for good, to avert catastrophic climate change," said the group's international head Kumi Naidoo.

Development charity Oxfam said the accord "could not even be called a deal."

"I am utterly disappointed," said Mojib Latif of the IFM-GEOMAR Leibniz Institute for Oceanography in Kiel. "Nothing substantial has come out of this. In fact it's a lot less than one might have expected in one's worst nightmares."

Another expert challenged the setting of temperature targets without limits on emissions. "Without any agreed targets for reducing greenhouse gases, one cannot limit global warming to two degrees Celsius," said Peter Lemke, chief climatologist at the Alfred Wegener Institute in Bremerhaven.

Talks had been close to collapse until a last-minute agreement by the US, China, Brazil, India and South Africa to recognize common goals.

The resulting draft was hailed as a "meaningful agreement" by US President Barack Obama and an "essential beginning" by UN Secretary General Ban Ki-moon.

Among the components of the agreement are pledges on financial aid for tackling the effects of climate change. The deal was savagely criticized at the proceedings for not doing enough to limit global warming itself. 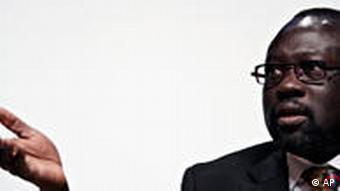 Sudanese delegate Lumumba Stanislaus was critical of the deal

Representative Ian Fry, from the threatened island state of Tuvalu, said "it looks like we are being offered 30 pieces of silver to betray our people and our future."

The main opposition in the all-night session came from the Latin American countries, including Nicaragua and Venezuela, who claimed it did not go far enough. Danish Prime Minister Lars Lokke Rasmussen, as chairman, ruled that the meeting would "take note" of the agreement – one step short of formal acceptance.

China and US blamed

China and the US, as the world's greatest emitters of greenhouse gases, have received the greatest criticism for not accepting tough emissions limits.

"This progress did not come easily and we know this progress alone is not enough," said President Obama before leaving the summit. "We've come a long way but we have much further to go."

Delegates from China, which did not want to accept demands for emissions inspections stipulated by the US, were more upbeat.

"The meeting has had a positive result, everyone should be happy," said Xie Zhenhua, head of China's climate delegation.

Delegates at the UN climate summit in Copenhagen have averted a collapse of talks saying they "took note" of a US-led compromise deal on tackling global warming. (19.12.2009)