UN climate summit ″takes note′′ of Copenhagen Accord | World | Breaking news and perspectives from around the globe | DW | 19.12.2009

Delegates at the UN climate summit in Copenhagen have averted a collapse of talks saying they "took note" of a US-led compromise deal on tackling global warming. 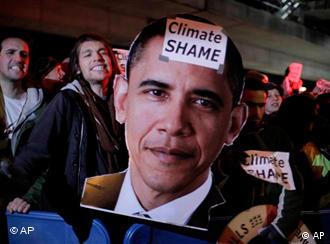 Activists say the UN climate summit is an "abject failure"

"The conference decides to take note of the Copenhagen accord of December 18, 2009," the chairman of the plenary session of the UN climate summit declared on Saturday morning.

The decision was announced after a marathon plenary session resumed on Saturday after talks were adjourned following threats by some developing nations to reject the accord put forward on Friday.

UN Secretary General Ban Ki-moon welcomed the deal as an "essential beginning", but admitted that it fell short of what many had expected.

"It is not what everyone has hoped for," Ban Ki-moon told reporters in Copenhagen. "We will try hard to have this legally binding treaty in 2010."

"Many will say that it lacks ambition," he admitted. "Nonetheless, you have achieved much." Ban pointed to pledges on financing by wealthy nations to developing states and said that the Copenhagen Accord would be "immediately operational" as of January 1.

Countries including Venezuela, Sudan and Tuvalu had criticized the deal spearheaded by the United States, China, India, South Africa and Brazil.

Opponents said the document, which sets a target of limiting global warming to a maximum 2 degree Celsius rise over pre-industrial times and holds out the prospect of $100 billion in annual aid from 2020 for developing nations, was too weak.

After talks with the leaders of China, India, and South Africa, US President Barack Obama told reporters on Friday that "for the first time in history all major economies are taking action against climate change." However, he admitted that the deal was "not enough."

Climate activists have criticized the US-led deal saying it falls far short of expectations. The environmental group Friends of the Earth branded the summit as an "abject failure" by rich countries which would impact on millions of people in poor countries. WWF said a gap between rhetoric and reality could cost millions of lives. Greenpeace said the deal cited by Obama contained "so many loopholes" it amounted to fraud.

US President Barack Obama says a "meaningful agreement" has been reached at the Copenhagen climate summit. But the deal has received a lukewarm response from European leaders. (18.12.2009)

German Chancellor Angela Merkel has joined other heads of state in Copenhagen at the UN climate change summit. German politicians hope she will be able to bridge differences between the United States and China. (17.12.2009)