Integrating refugees ′stitch by stitch′ | World | Breaking news and perspectives from around the globe | DW | 30.03.2016

Can needles and thread help refugees integrate in Germany? Two German entrepreneurs are proving they can: They have founded a sewing workshop to help refugees settle down. 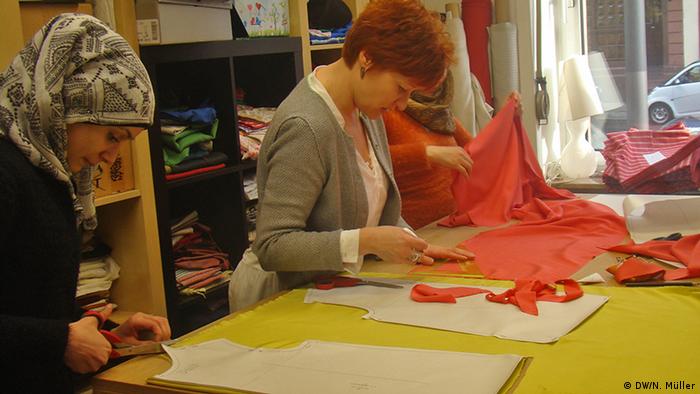 In a cozy workshop in Frankfurt's Bornheim district, shelves filled with folded material line the walls, and long rolls of colourful cloth are stacked in each corner. Esraa, a petit seamstress-in-training, leans over a big table in the middle of the room. Guided by a paper pattern, she carefully cuts through a sheet of bright lime-green fabric. Today, she's making a blouse.

Esraa is one of more than one million refugees who arrived in Germany in 2015 - most of them from war-torn countries like Syria and Afghanistan. After having mastered the journey, the next challenge is integration. In most cases that means learning the language, finding a job and finishing their education.

Esraa had been studying fashion design in Damascus before her family fled the Syrian war. In Germany she wants to pick up her studies again, but she needs to improve her German skills first. And while she does that, she's got a chance to get some practical sewing experience - at her first job in Germany. 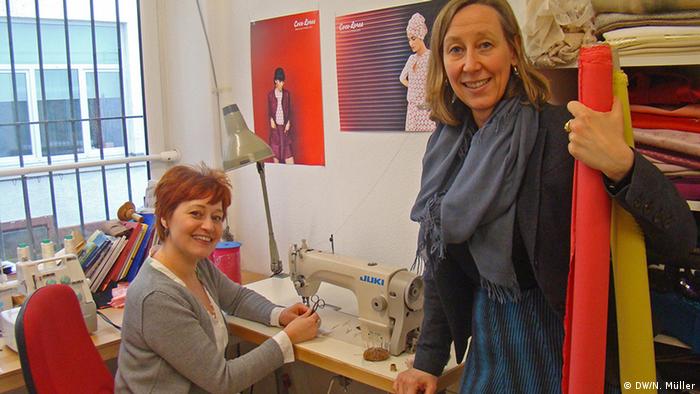 The project "Stitch by Stitch" was brought into being by seamstress Claudia Frick and graphic designer Nici von Alvensleben. They hope the startup will help their seamstresses adapt to life, culture, and work in Germany.

"It was also the question: What can we do? Not what is Angela Merkel doing to help, or what are other people doing, but what can we do?" Claudia said. Her dream is that in a few years, many of the seamstresses will open their own sewing workshops.

For Esraa it was a big step to get her first job in Germany. Nici recalls the moment, when she met Esraa's family and decided to take her on board. "Across from us was her father and he pulled out his phone, took a photo, super proud, and I was realizing that this photo is going to get sent around friends, neighbors, probably people in his home country. And it said 'Look, my youngest daughter is the first one getting a job in Germany.' I felt like there we really have an impact," she said. 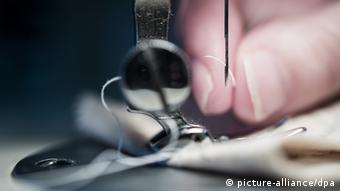 Refugees settle down, stitch by stitch, step by step

However, Nici and Claudia still face some obstacles. Both women have more than a decade's experience running their own businesses, but launching Stitch by Stitch has come with its own challenges - for one, dealing with migration officials and bureaucracy. New territory, says Nici.

"I think the biggest challenge for us is working with the Federal Employment Agency and the Foreigners' Registration Office," Nici said. "There needs to be only one agency or one person who's not supportive and the whole thing falls apart. But I have to say that any encounters I've had were really fantastic, people were really helpful."

Also, many refugees have been through traumatic experiences to get to Europe. That's something Nici and Claudia have had to take into account. When setting up Stitch by Stitch, they consulted a trauma expert. Nici says they hope to turn the workshop into a positive space where the seamstresses can focus on their skill.

"After having this experience, working with these colors and beautiful materials, it's kind of soothing, something nice to do and uplifts you, and you also created something at the end of the day," Nici said. 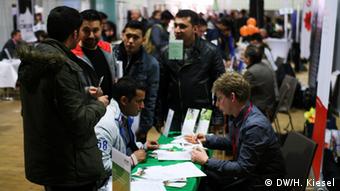 Many refugees try to find jobs immediately after their arrival

Their project aims to benefit refugees, but in the long run it should also be profitable. They plan to use the workshop to produce designs for small German fashion labels.

The response to their small operation so far has been mostly positive. They say local fashion companies are interested in placing orders with them because they're working with refugees.

So far, Esraa is the only seamstress working with Stitch by Stitch. But by the end of the year, Nici and Claudia would like to have five seamstresses. If things go well down the track, the Stitch by Stitch team plans to find a bigger production space for their workshop, and eventually want to take the idea to other German cities.

Distortions in migrant reporting – striving towards a realistic picture

Listen to the radio report about stitch by stitch