As meat-addicted dogs and cats threaten to eat us to extinction, some pet food startups are pioneering sustainable puppy snacks based on high-protein, low-emission insects. 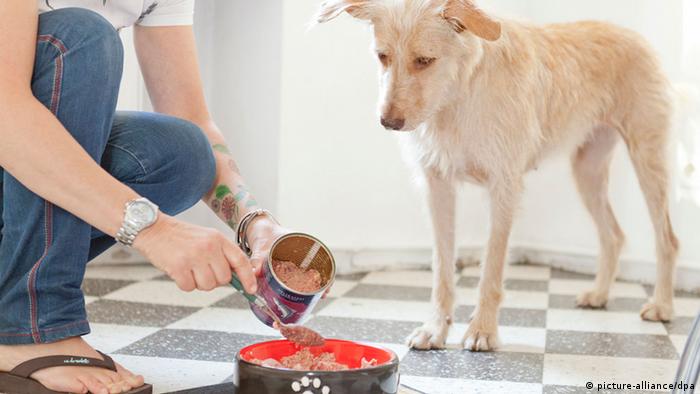 I still love my dog. Even now I know he's an indulgence the planet cannot sustain for much longer. A spate of recent research has confirmed that our cuddly, carbon-intensive besties have become an environmental hazard. I know. It's depressing. Again; I love my dog.

A new Berlin pet-food brand with the slogan "insect power" is offering hope to dog lovers the world over. By feeding your canine high-protein fly larvae as opposed to CO2-spewing cow innards, your pup's outsized carbon pawprint could be slimmed down overnight.

The brainchild of Canadian former veterinarian Veronique Glorieux and Gema Aparicio from Spain, Eat Small's raison d'etre is simple: A serving of dog food based on fly larvae-derived protein generates just 1 gram of greenhouse gases compared to 1,000 kilos of CO2 for the protein equivalent beef serve (1 kilo). This is partly because insects require far less food, water and space — and don't produce methane.

A 2017 study titled Environmental impacts of food consumption by dogs and cats by Gregory Okin, a geographer at UCLA, noted that the 163-odd million dogs and cats in the United States consume around 20 percent of the calories of humans.

Because much of that food is livestock meat, the environmental consequences are already devastating — livestock production contributes around 15 percent of all human-induced carbon emissions, according to a 2015 Global Warming: Role of Livestock study.

Time to eat the dog?

Back in 2009, the book "Time to Eat the Dog? The Real Guide to Sustainable Living" argued that dog food generated is double the eco footprint required to produce and fuel an SUV. Authors Brenda and Robert Vale were already warning that dogs were a luxury the planet could no longer afford.

Yet with the fast-expanding Chinese middle classes having gone pet crazy in recent years — after Mao banned furry friends for being elitist and bourgeois —  the global pet carbon paw print is set to further skyrocket.

As a pet owner and veterinary doctor, Glorieux — who was initially inspired by the idea of insect protein in early 2017 after seeing a TV segment about marketing low-carbon crickets for human consumption — knew she had to do something to solve what she calls "one of the world's biggest ecological challenges."

"We knew it was the future," she told DW of her inspiration for a high-protein pet food alternative that could also combat the allergies, diabetes and liver problems that animals developed through the processed food they eat.

But the issue was ultimately an environmental one. "It's not possible to continue animal farming to meet these pet food needs," she said.

Crickets remain a relatively expensive form of protein due to the large amount of space required to grow them, so Glorieux contacted a German fly-larvae producer who recently started selling his creepy crawlies as feed for animals that humans eat (though not for fish). Now he has a new market.

Insects on your plate

Eat Small is part of a small but fast-expanding coterie of pet-food startups that are attempting to improve sustainability by, among other things, including insect protein in their product range. A number are based in Germany and were on hand to spread the mantra of low emissions animal feed at the world's largest pet food trade show, Interzoo, held in Nuremberg, Germany.

Also at the show was the US-based Pet Sustainability Coalition, which was established in 2013 and has this year gained several European members, including larger German pet food and animal feed companies like Josera, who are now also working with insects.

"At Josera, we see it as our responsibility to protect the planet. Pet Sustainability Coalition has helped us navigate what can be a difficult pathway to address our carbon footprint," Klaus Wagner, CEO of Josera, said.

Another eco puppy-snack, Tenetrio, is using mealworms that it breeds in Potsdam, near Berlin.

The company promotes the fact that worms need hardly any energy to maintain their body temperature and can therefore put all their energy into growing protein-rich body mass. That means they can not only be bred much more efficiently that cattle, for example, but due to the reduced feed requirement use only a fraction of the water.

Best of all, mealworms have near zero carbon emissions and are 100 percent consumable, meaning there is no waste. By comparison, only about 40 percent of a carbon-intensive cow is consumed.

She added that Tenetrio's homegrown mealworms are GMO-free.

Will pup go for it?

Shouldn't animal protein loving pet owners also be switching from beef to insect burgers for the sake of the planet? While around 80 percent of countries already eat some kind of insect — with crispy fried bugs and worms a street food staple in Thailand — in might take decades for a la carte insects to push steaks off Western plates.

Yet if it's a struggle to get carnivorous humans to embrace bug protein, dogs are quick adapters. "We still haven't met a dog that didn't like our treats," Glorieux said.

Before the first rollout of Eat Small dog snacks hit the shelves in spring (cat varieties will be added in 2019 but our feline companions need a much higher dose of protein and the product is still in development), a trial involving 50 German families showed that 70 percent of dogs immediately took to their new fly-based dinner.

Most importantly, 90 percent of owners said their dogs seemed happy to forego their traditional meat hit for an insect power snack — and to take a first small step to saving the planet.

Zsa Zsa, a 9-year-old English bulldog, has won this year's World's Ugliest Dog award at a contest in the San Francisco Bay Area. The competition, which is held annually, aims to raise awareness for dog adoption. (24.06.2018)

The research by the University of California comes on the heels of a new law in California requiring dairy farmers to slash methane emissions. Methane is a major contributor to global warming. (26.05.2018)

Most Europeans would be horrified at the thought of eating insects, although insects are considered a perfectly normal food in Africa and southeast Asia - because they're full of valuable nutrients. (09.03.2016)

The future of eating