TransCanada is building a gas pipeline in southern Mexico that's threatening to cast indigenous communities off their land. But some are refusing to yield to the pressure to leave and are taking their fight to court. As Dona Maura Aparicio Torres finished planting her corn, she saw a man walking through her field. He trampled over her plants, took photographs and scribbled in a notebook as he approached her house.

A few days later, he was back. This time, he came with a demand that she give him the paperwork for her land. "We're going to build a pipeline here," he told her. That was in May 2017.

Two years earlier, the Canadian company TransCanada won the contract to build the Tuxpan-Tula pipeline, a 287-kilometer (178-mile) structure that will run across four states in southern Mexico to the Gulf of Mexico. The state energy authorities had approved the pipeline, as part of reforms begun under Mexico's former president, Pena Nieto.

Much of the structure has already been built, apart from the final 90-kilometer stretch that runs through the village of Chila de Juarez and intersects the field where Torres grows corn and peanuts.

"Our harvest is the most valuable thing we have," says Torres, who was born into the Otomi indigenous community in Chila de Juarez. She still lives in the area with her husband and three children, in a house she bought from her mother-in-law. She sees no alternative but to stand up for what is hers. 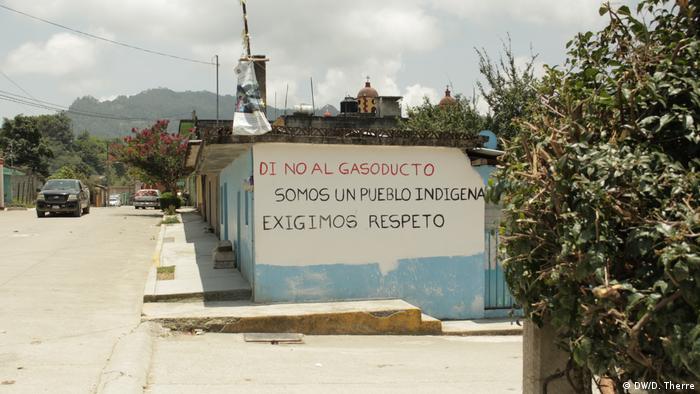 She is now part of a protest movement led and advised by a regional council of indigenous peoples in the states of Puebla and Hidalgo. The group was formed to share information and join forces in their claims against TransCanada.

Spokeswoman Oliveria Montes says a feeling of mistrust reigns — toward the company, the state and even neighbors.

"As soon as one person in the community sells their land, the neighbors thinks they have to sell theirs too," she told DW.

Bees and honey to save the forest

Part of what the indigenous council does, she says, is to explain that people who are promised money to leave their land often never see a cent.

Torres received an offer of money on one of the many return visits she received from the man who had trampled her plants. When she asked him how much was on the table, he refused to name a figure. "We'll resettle you," he told her. "Where?" she asked. His response was another demand that she hand over the paperwork for her land. She refused.

He left his telephone number and a threat to build on the land whether she moved or not. She never called. And for the time being at least, she is still there.

At the end of 2017, construction on the pipeline was paused following a complaint filed by the indigenous council. The case, which involves Chila de Juarez and four other communities, is now in court because before such a mega-project can be built the Mexican energy ministry must assess its impacts on the environment and residents.

While the ministry did produce such an impact report, the council questions its findings. According to Raymundo Espinoza Hernandez, a lawyer representing the council, 459 communities and 260,000 people would be affected by the construction, but the ministry assessment "only made mention of 11 communities," he says. 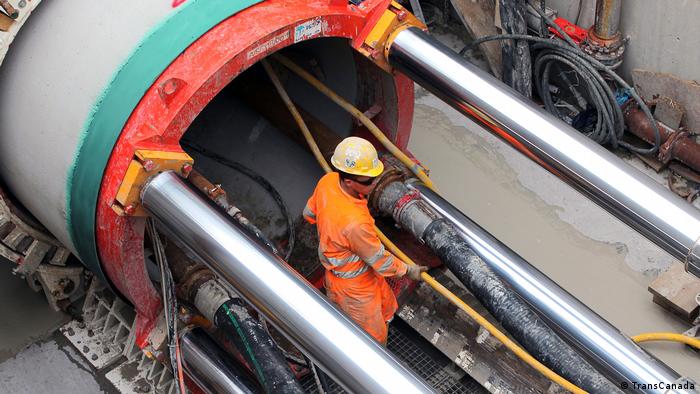 TransCanada is also building other pipelines in Mexico, including the Tamazunchale pipeline extension (pictured) which runs through some of the country's most mountainous terrain

When asked to comment, TransCanada said its subsidiary Transportadora de Gas Natural de la Huasteca (TGNH) was responsible for the Tuxpan-Tula pipeline. The same company that employs the man Torres found traipsing across her property.

TransCanada also said it knew nothing of appropriation of land in indigenous communities and does not support moving people off their land without prior consultation and consent. It concluded that it was ultimately up to the Mexican government to decide whether construction could proceed or not.

TransCanada is under pressure. The company wants the pipeline to be up and running at the beginning of 2019. It's part of a larger network that would eventually see natural gas flowing from Brownsville in Texas to Tuxpan and Tula in the heart of Mexico. And it's already come under fire in the United States for the Keystone pipeline, which runs through Native American land.

Read more: Big beef versus family farms: A war of ideas in Brazil

So far, the delays on the pipeline as a result of resistance have pushed its costs up by a third to almost €347 million ($400 million) and Espinoza is worried that will have a negative impact on those standing in the way.

"They'll play the communities off against each other," the lawyer said. "If the company can't continue with legal means, they'll use violence to force their way into the communities." 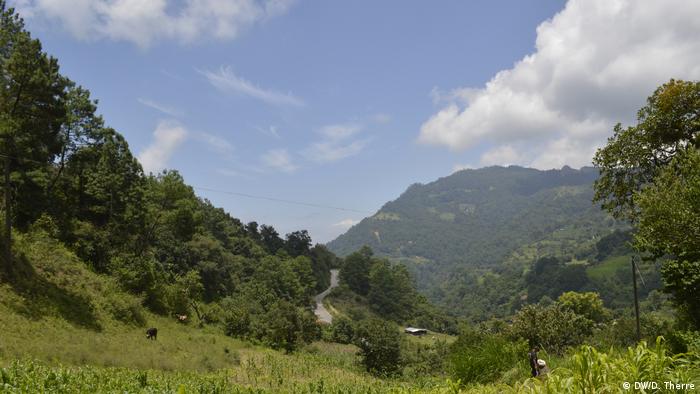 Dona Maura Aparicio Torres and her husband don't want to leave their land nestled below the holy mountain of the Otomi people. They say they don't know what they would do without it

Her husband, Salvador Murcia Escalera stands among young peanut plants with a pick in his hand. He spent 14 years working as a hired hand on a plantation in California so he could send money back home. He returned when his wife called him to say her land was under threat.

"The land gives us everything," says Torres. And she doesn't want to see that taken away from her. She also worries that the holy mountain of the Otomi people could be blown apart to facilitate the pipeline, as has already happened in other communities.

She looks up at the mountain into which her land nestles. Legend has it that a young man called Margarito once climbed to the top, and was so tired on arrival that he laid down to sleep and never returned. The Otomi in Chila de Juarez worship him as a rain God, taking sheep, beans and corn to the mountain for him. Just like Margarito, Torres never wants to leave.

With its eco-chic hotels, yoga retreats, Mayan ruins, luscious jungles and turquoise ocean, the Mexican town of Tulum has become the new bohemian hotspot. But at a devastating cost to the environment. (03.04.2018)