A new nationwide survey in India has shown lack of digital literacy is leaving large segments of Indians behind as the rest of the country goes online. 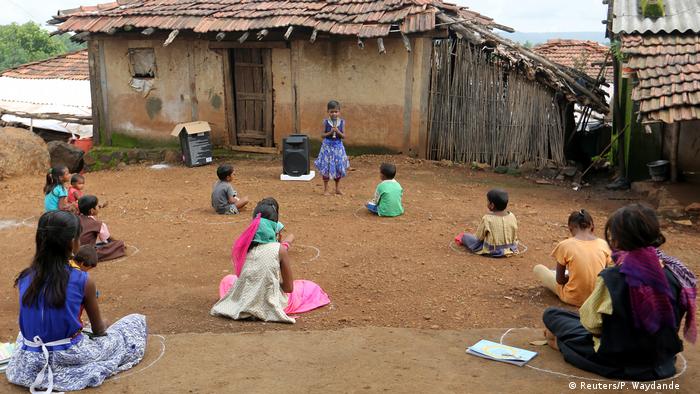 There is little internet access in India's rural areas

India's fifth National Family Health Survey (NFHS) released on Saturday revealed that there is a significant digital divide in the country, with rural women least likely to have internet access.

The 2020 survey was the first to publish details on the percentage of women and men India who have ever used the internet.

The data was obtained from 22 states and union territories and over 300,000 households.

"As much as we may like to believe that India is sprinting alongside the world digitally, we cannot forget the huge mass of people who have yet to witness the dawn of computers. It is a reflection on rural India," Mamta Kumari, a health activist from Bihar, told DW.

Overall, the NFHS showed that only 42% of Indian women surveyed have ever used the internet, compared with 62% of men.

The five states of Andhra Pradesh, Bihar, Tripura, Telangana and Gujarat reported the lowest percentage of urban women using the internet. Goa, Kerala and Sikkim were the only three Indian states reporting more than 50% internet usage among rural women.

Experts said the findings were not surprising, as internet access in rural India remains shoddy.

"There is a huge chasm between what is projected and reality. Connectivity still remains a largely urban phenomenon in India. It will take a long time to bridge the difference," Pavan Duggal, a cybersecurity expert, told DW.

"I am not surprised by these findings. The digital divide exists and perhaps the states with good social indicators like Kerala and Andhra Pradesh are doing better," Apar Gupta, executive director of the Internet Freedom Foundation of India told DW.

"If measures are not taken, the existing socioeconomic gap will keep widening with digital illiteracy," he added.

It takes a long time for news and information to reach people many people living in rural India without internet access.

A recent study done by the Telecom Regulatory Authority of India showed that Delhi, Himachal Pradesh, Kerala, and Maharashtra are India's top five service areas in terms of internet subscribers.

The northern state of Bihar has the lowest number of internet subscribers with 32.45 per 100 people.

In July, US tech giant Google said it will invest $10 billion (€8.8 billion) into digitalizing India over the next five to seven years.

The investments will target making access to information affordable, building new productions, helping businesses with their transition to digital, and increasing the use of artificial intelligence in health, education, and agriculture, the company said.

Modi met with Pichai to discuss a range of subjects, "particularly leveraging the power of technology to transform the lives of India's farmers, youngsters and entrepreneurs."

Other US tech firms have also set their sights on the Indian market. In April, Facebook announced a $5.7-billion investment in a project to digitalize over 60 million small businesses. In January, Amazon said it will invest another $1 billion in the country, bringing Amazon's total investment in India to $6.5 billion

With its architecture, literature and yoga poses, India is famous for diversity. But no matter how rich its culture may be, thinking outside the box is not exactly welcome, especially when it comes to religion and sex.