India struggles with religious lynchings | Asia | An in-depth look at news from across the continent | DW | 08.08.2019

A cow-related lynching in the state of Jharkhand was not prosecuted by police and went unnoticed by the public. The incident has become a symbol of the Indian government's inept handling of religious hate crimes 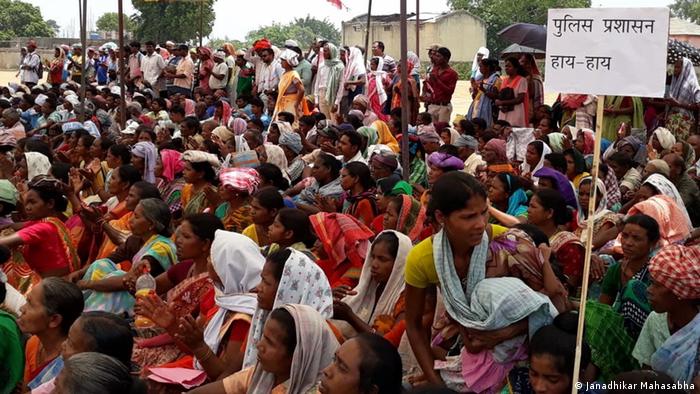 Over the last five years, India has seen an outbreak of religious hate crimes, with an average of one happening every week. Many of them have drawn mass protests, social media outrage, hashtags and even a response from the government.

But one particularly heinous case has fallen through the cracks and has drawn little attention and outrage, despite the brutality and injustice experienced by the victims.

In April this year, 55-year-old Prakash Lakda, a member of a Christian tribe, was lynched by a mob of Hindu villagers who suspected him of slaughtering a cow in the central Indian state of Jharkhand. Three other tribals from his village were also attacked, leaving them grievously injured.

Read more: How India's sacred cows are creating havoc on the streets

Now, a police investigation has shown that Lakda's death might have been as much a result of police complicity as it was of the violent mob. Last week, the investigation revealed how Lakda and the three other victims were ignored by the police for over an hour and a half, as they lay on the street, writhing in pain, after having been attacked for over four hours.

The police, however, have now gone on to charge the three victims on charges of cow slaughter, an  offense under local laws that can lead to 10 years of imprisonment, or a fine of 10,000 rupees ( €126, $140). The complaint against them was lodged by the mob that lynched Lakda.

The lynching itself and the official response to it are symbolic of the Indian state's inept handling of these crimes and the long road to justice for victims. 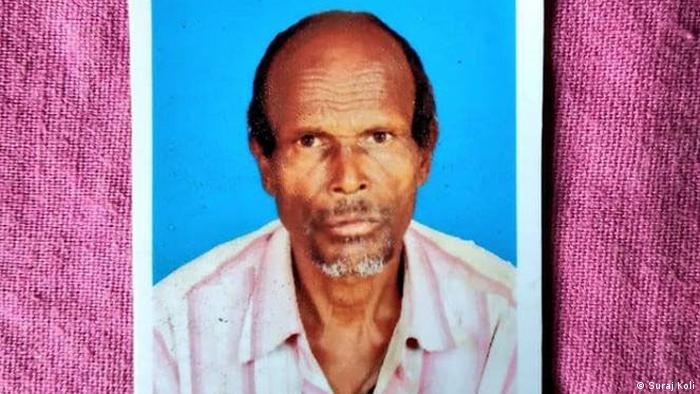 In April, 55-year-old Prakash Lakda was lynched by a mob of Hindu villagers who suspected him of slaughtering a cow

This recent outbreak of hate crimes has been concurrent with the term of the Hindu nationalist Bharatiya Janata Party (BJP) government under Prime Minister Narendra Modi.

In the last five years, since Modi was first elected to office in 2014, the country witnessed 276 such religious bias-driven hate crimes, according to Hate Crime Watch, a database that tracks such crimes. In the five years preceding Modi's tenure, there were only 24 cases.

There have already been 23 such hate crimes in 2019, and Jharkhand, the central state where Lakda was lynched, has seen 15 of them.

These hate crimes often have the tacit or overt support of Modi's ministers or members of his party. Last year, former Indian minister for civil aviation, Jayant Sinha, congratulated eight people convicted of lynching a Muslim trader on a busy street in Jharkhand for carrying beef in his car.

In the same state last June, another member of parliament from Modi's BJP, Nishikant Dubey, said that he would bear the legal expenses of those accused of lynching two Muslim cattle traders to death on suspicion of cattle theft.

Lynched, paraded and made to chant religious slogans

For Lakda and his wife, Jermena, April 10 this year had promised to bring some relief. The family's income was around €19 a month, mainly out of the work that Lakda did at a chicken shop in the neighboring Jairagi village on a weekly basis.

That evening, a villager in their tribal Jurmu village announced that his old ox had died and was lying near the river, inviting locals to carve it for its meat, following an old village custom. "It meant that at least a couple of meals had been taken care of," said Suraj Koli, Lakda's son-in-law.

Less than two hours after Lakda went to carve the ox, accompanied by other villagers, a Hindu mob from Jairagi village attacked him and nearly 30 others. "They were 20-30 of them, armed with sticks and rods. Some of them kept saying, 'Let's kill these people,' while they attacked us," recalled Janwerius Minj, in his testimony to the police, of which DW saw a copy.

The mob attacked Lakda, Minj and two others — Peter Kerketta and Belesius Tirkey — for at least four hours, before parading them through their Hindu-dominated Jairagi village.

This is when, Minj claims, the mob forced them to chant Hindu religious slogans of "Jay Shri Ram," hailing Lord Ram, a popular Hindu God. Aman named Sanjay Sahu, said that villagers assaulted the four when they were being paraded.

Sahu, in his testimony to the police, said that they planned to hand over the victims to the police, but developed cold feet minutes before reaching the police station around 1:30 a.m.

"We got scared of going to the police, so we dumped the four injured persons outside the police station," he said.

As a result, the victims lay outside the police station, but they had been beaten so badly that neither of them could walk inside

Minj said the four could barely talk. "We were writhing in pain and feeling very cold as a result of our injuries. That's when the police came, saw us, asked us our names and what had happened. We could barely speak, but we told them what we could," he recalled in his testimony to the police.

The victims thought help was coming. Instead, the policemen emerged out of the station a while later, carrying shawls with them. "They offered us shawls because we told them we were feeling cold. They also lit fires near us, but they didn't take us to the hospital," says Minj.

When Lakda reached hospital, he was declared dead on arrival.

Despite this, after the attacking mob complained, the police booked the four victims, including Lakda on charges of slaughtering the cow.

Police investigations showed that the animal was dead long before the villagers carved it for its meat. Last month, the three surviving victims moved a local court, asking for protection from arrest. The court rejected their request, throwing the doors open for their arrest by the police.

"We have not got complete proof of whether the ox was dead or not. Until we are not convinced, we can't drop these charges against the victims," said the head of the local district police,  Gumla Anjani Kumar Jha. 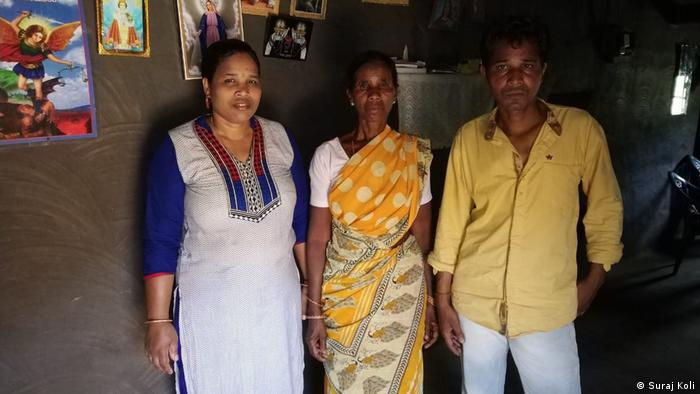 Robbed of the sole breadwinner, the Lakda family (his daughter, wife and son-in-law) now has to fight various battles, some legal and others financial

For Lakda and his family, the struggle has continued past his death. Robbed of the sole breadwinner, the family now has to fight various battles, some legal and others financial.

Until a few weeks ago, the Lakda household was scampering around, from their village to various government offices across Jharkhand. Local government officials had pestered Lakda's wife to produce documents proving their tribal identity. Jermena, 45, had none.

Local officials told her that she would have to get a certificate that was originally issued to her parents in the 1950s. Even while mourning the loss of her husband, Jemena was forced to make multiple trips to Mahuadanr, over 100 kilometers (62 miles) away and three hours by bus.

"After a month and a half, we got the certificate. When we submitted it at the local office, they rejected it, saying we would have to make one again from the local office," said her son-in-law, Koli.

The visits drained the family of resources. The repeated trips to Jharkhand from New Delhi, where Koli and Lakda's daughter Shubhra live, meant that Koli lost his job as a driver too. Shubhra now works as a domestic maid and some of her income is sent to her mother.

Superintendent of Police Jha says that the family will be compensated by the government. "We have approved 100,000 rupees for the family. In addition, we are trying to give her an enhanced compensation because the victims are tribals," he said. However, Jha said that the amount is generally sanctioned after the completion of the trial, a process that can easily take a few years.

Jha also confirmed that the police had suspended two officials for their negligence that led to Lakda's death. "We found that there were deficiencies in the actions of the police in providing relief to the victims. We have launched a departmental inquiry against them for further action."

But Koli is not very optimistic. "I don't know if it is because the accused are Hindus and the victims are not, but the police investigations have not been fair and thorough. There is no clarity over what is happening with our case."

Police say a man suspected of smuggling cows has been killed by a mob in northwestern India. Attacks by so-called "cow vigilantes" targeting minorities have become a growing problem in the Hindu-majority country. (21.07.2018)

As part of efforts to curb the spread of misinformation, WhatsApp will launch a test to limit forwarding messages. Further limits will be placed on users in India, where the forwarding function has led to mob lynchings. (20.07.2018)