How India's sacred cows are creating havoc on the streets

The cow is a holy animal for Hindus, with religious zealots ready to take on anyone harming the divine creature. But the growing number of stray cows is proving to be a bane for both Indians and their bovine gods. 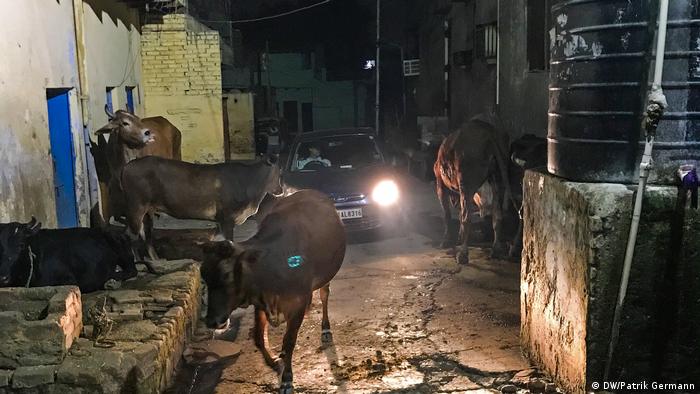 For many Hindus, who make up nearly 80 percent of India's 1.3 billion strong population, the cow is a sacred animal. In Hindu mythology, the animal is depicted as accompanying several gods, like Shiva, who rides on his bull Nandi, or Krishna, the cowherd god.

In ancient Hindu texts, the cow appears as "Kamdhenu" or the divine cow, which fulfils all desires. Its horns symbolize the gods, its four legs, the ancient Hindu scriptures or the "Vedas" and its udder, the four objectives of life, including material wealth, desire, righteousness and salvation.

Mumbai-based group called "Serve Cows" says on its website, for example, that cows provide different products for human use, namely, milk, butter, dung, and urine, which the group claims has anti-fungal and anti-cancer properties – none of which has been conclusively proven by scientists.

These religious considerations have led to stringent laws and a rise in the numbers of cattle protection groups, spurred by the right-wing Bharatiya Janata Party, led by Prime Minister Narendra Modi.

Especially since the enforcement of the Prevention of Cruelty to Animals (regulation of livestock markets) rules in 2017, the sale of cattle to slaughterhouses for use as meat or leather has become very difficult. The law has also severely impacted several communities involved in such businesses, including lower caste Hindus, for whom beef is a cheap and important source of food.

Nearly 6 million cows roam freely on India's roads, according to the 2012 livestock census and the number is expected to go up substantially in the next livestock report, due later this year. The numbers have caused a rise in incidents of traffic accidents involving cows that have been reported in the last couple of years, although comprehensive statistics on the problem are still missing.

According to Arjun Sheoran, advocate and the head of the People's Union for Civil Liberties in the northern city of Chandigarh, the changes in cow protection laws and their harsh implementation have led to an exponential rise in the number of stray bovines. People, who cannot afford to look after their cows after they stop producing milk, are forced to leave the animals on the streets. Thus, "many cows, which are abandoned, end up in urban areas where they create massive traffic and public health and hygiene issues," Sheoran told DW.

In West Bengal, for example, authorities intensified a cattle seizure drive earlier this year after reports that a car lost control because its driver was trying to avoid hitting a cow. In Noida, north of the capital New Delhi, a 22-year-old man died after his motorcycle collided with a stray cow. Cows themselves have been victims of traffic accidents, with nearly 7,000 animals dying on railway tracks in India's Uttar Pradesh since April this year, according to data collected by the North Central Railway.

Legislators in India, backed by the ruling Bharatiya Janata Party, have announced steps to protect stray cows. Most recently, the government of India's Himalayan state, Himachal Pradesh said it was passing a resolution to declare the cow the "national mother."

Anirudh Singh, the political leader who proposed the resolution said, "The cow is not bound to any caste, creed or religion and makes a huge contribution to humanit ... People abandon cows when they stop giving milk so there is need for such a move," the leader told the newspaper, Times of India.

Singh hopes the resolution will help create more cattle shelters and spur legislation to stop cow-related lynching, although that has not proven to be effective in other regions.

Many states like Delhi, Rajasthan and Punjab have established cow shelters, however these are stretched beyond their capacities, according to local administrative bodies.  States like Uttar Pradesh have decided to invest in radium bands for stray cows, making it easier for pedestrians and other traffic users to spot the beasts.

Experts like Sheoran, however, are sceptical of such measures. "There aren't enough gaushalas [cattle shelters] to take care of such increased number of cows and most of the expenditure by the government seems to be for criminal cases, like targeting Muslims and Dalits instead of creating proper infrastructure for the care and protection of cows and other animals," Sheoran says, referring to recent cases where Hindu mobs killed people for allegedly eating beef or slaughtering their cattle.

But for the authorities, cows seem to be a more pressing matter than humans. Recently, a police officer in Uttar Pradesh was killed while investigating an incident of alleged cow slaughter, as the local government continued to focus on preventing the killing of cows.

Until a few months back, states like Haryana had 16 members in its "Gau Seva Ayog," or cow service committee Sheoran says, adding, "The state human rights commission had none."