The $500 million project aims to connect the capital, Male, with three nearby islands. India is trying to fend off Chinese influence in the region. 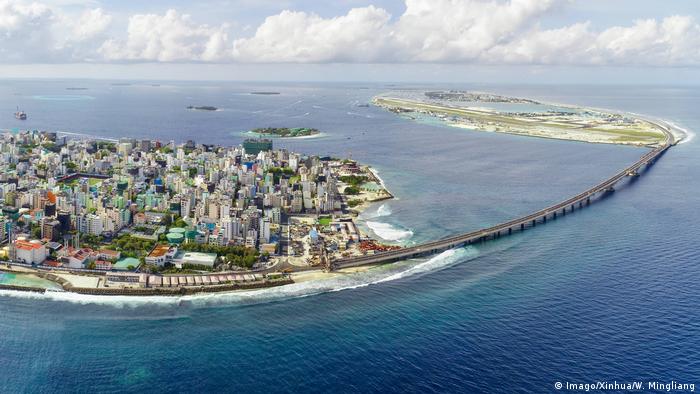 India pledged $500 million (€422 million) towards funding a project in the Maldives on Thursday to help the island nation connect its capital to three nearby islands, as New Delhi seeks a riposte to Chinese influence in the region.

Indian Foreign Minister Subrahmanyam Jaishankar told his Maldivian counterpart Abdulla Shahid that New Delhi will support the Male connectivity project with a grant of $100 million and a new line of credit of $400 million.

Jaishankar said the plan to connect Male with the islands of Villingili, Gulhifahu and Thilafushi will be the largest civilian infrastructure project in the Maldives.

The foreign minster also tweeted about economic relations between India and the Maldives. "Connectivity brings prosperity," he said. "Happy to announce the start of regular cargo ferry service between India & Maldives to boost trade & commerce. We're also starting an air travel bubble with Maldives to sustain & promote the dynamic people-to-people ties between the two countries."

The popular tourist destination has become a focal point for the world's two most populous nations, particularly in the wake of China's Belt and Road Initiative aimed at improving trade and transport links.

India and the West accused China of saddling countries, such as the Maldives, with unsustainable debts while tightening its grip in the region.

Yameen was subsequently convicted of money laundering and sentenced to five years in prison, with his jail-term beginning in February of this year. He was found guilty of awarding construction contracts to Chinese companies at inflated prices.

The Maldivian Democratic Party of President Ibrahim Mohamed Solih is set for a landslide victory in parliamentary elections. The campaign has been helped by the return of former exiled President Mohamed Nasheed.

Indian Prime Minister Narendra Modi has made a brief visit to Sri Lanka to emphasize his "neighborhood-first policy." China is also trying to exert its influence in both Sri Lanka and the Maldives.