India: Nepali man freed from jail after 41 years without trial

A Nepali man was arrested on murder charges in India in 1980 and sat in jail for decades without a trial. Rights activists say Durga Prasad Timsina's ordeal highlights the grim reality of pretrial detainees in India. 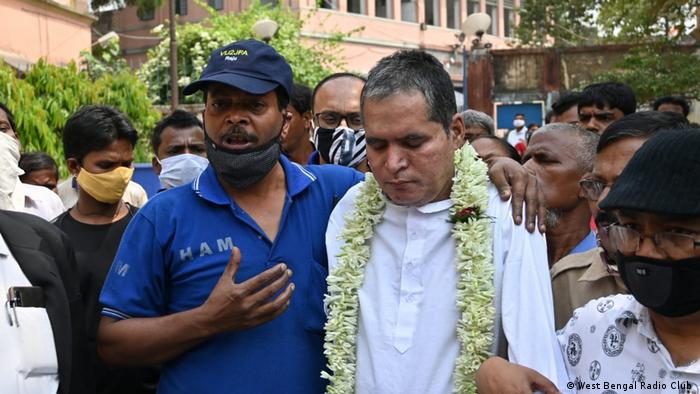 Durga Prasad Timsina had lost all hope of ever seeing his mother or going back to his village in Nepal after awaiting trial on a murder charge for 41 years.

He was moved from one jail to another across West Bengal, and finally ended up at a correctional center near Kolkata, where no one could understand his native language, Nepali.

Timsina could not speak Bengali at all, and barely knew Hindi: the two languages essential to get by in that part of the eastern Indian state.

But, against all odds, the day finally came last month when Timsina walked out of the Dum Dum Central Correctional Home.

Timsina was accompanied by officials from the Nepali consulate in Kolkata and members of the West Bengal Radio Club — a collective of amateur radio operators — who had been instrumental in securing his freedom.

The case has shed light on the plight of people awaiting trial in Indian jails, many of whom are imprisoned for longer than their sentences would have been if they were convicted.

'Celebrations for days' after release

"We are all overjoyed to have him back home. There were celebrations for days after he came back to the village," Timsina's cousin Prakash Chandra told DW.

"Sadly, the time in jail has left him traumatized. His hands and legs are shaky; he can hardly eat and is also suffering from a number of physical ailments," he said.

Timsina is being treated at a local hospital, and the provincial government will take care of the medical expenses, Chandra said, adding that he was not in a condition to talk to people.

Why was he arrested?

Timsina left his village in a remote region of eastern Nepal in search of a job at 20 years old. In 1980, he went to the scenic Indian town of Darjeeling, wedged between Nepal and Bhutan.

There Timsina met a man who promised him a job with the Indian army. However, according to Chandra, the man ended up framing Timsina for committing a murder.

Timsina says he was falsely identified as a man named Dipak Jaishi and arrested by police.

He told a crowd of reporters soon after his release that he was innocent, which his family has maintained since he was arrested.

"No one ever came forward with any evidence. They just took Durga Prasad and put him in jail," Chandra said.

The name change, he said, was because of a filing error by police.

"The people who knew him in Darjeeling knew only of his nickname, Dupat, which somehow became Dipak on the police charge sheet," Chandra said. "His surname was registered as Jaishi, which is actually the name of our community." 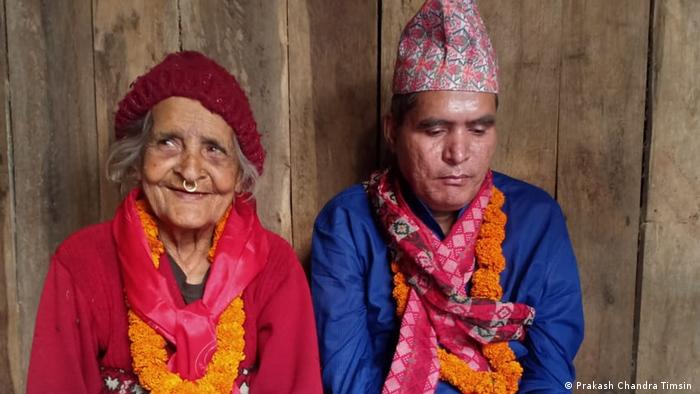 Durga Prasad Timsina sits with his mother after his release

The change in Timsina's name in the records meant that no one who knew his real identity could find him. He spent several years in a Darjeeling jail while his family back home received news that he had died.

"It was a dangerous time in Darjeeling back then," Chandra said, referring to the armed struggle for Gorkhaland in the early 1980s, when the Gorkha community in the region sought a separate state for Nepali-speaking people. The ensuing violence left more than 1,200 people dead.

"They were killing people from Nepal, and we thought that he was among those killed," his cousin said. It was also why the family didn't search for him when he initially went missing, he said.

"We did receive a letter in 2013 from West Bengal that had the name Dipak Jaishi on it, and it included the name of Durga Prasad's mother," Chandra recalled. "But we thought it was someone playing a cruel joke on us and did not give it much thought."

How was he freed from jail?

Timsina was transferred from the Darjeeling jail to another in Kolkata before being sent to the Dum Dum Correctional Center near the state capital in 2005.

It was there that he met a man named Radhyashyam Das, who was arrested in 2011 as a political prisoner. He was lodged in the adjoining cell and soon tried to talk to Timsina.

"He was always silent and wouldn't talk to anyone," Das told DW. "Everyone believed he was mentally disturbed. I tried to speak to him, but he didn't understand anything I said."

He also noticed during his time at the correctional center, that, though the other inmates were receiving letters and had visitors, no one ever came for Timsina.

The new life of Dalit women

When Das, who had been on trial for nine years, received bail in October 2020, he vowed to find the family of the man he believed to be Dipak Jaishi.

He reached out to the West Bengal Radio Club, which has reunited many missing people with their families.

Ambarish Nag Biswas, the founder of the amateur radio club, verified Das' claim and used his police contacts to arrange a meeting with Timsina in November last year.

"After much prodding, Timsina finally spoke in Nepali," Biswas told DW. In one of the subsequent meetings with Timsina, he grabbed the lawyer's pen and wrote down his name, his mother's name and the name of a school in Nepal's Illam district, he said.

With these clues, Biswas reached out to the Nepali consulate in Kolkata and asked officials to find and contact Timsina's family. He also contacted other radio operators in Nepal with whom he had worked during the 2011 earthquake.

They also filed for his bail at the Calcutta High Court. "After weeks, Nepali ham [amateur radio] operators found Prakash Chandra and convinced him and his family that Durga Prasad, was, in fact, alive," Biswas said.

By then, local media had covered Timsina's case extensively and the Calcutta High Court judge took up the matter on priority.

After multiple hearings, the court ruled that Timsina was not medically fit to stand trial and on March 17 ordered his release.

According to the latest data released by India's National Crime Records Bureau last August, about 70% percent of the 478,600 inmates in Indian jails are awaiting trial. A significant majority of those people are underprivileged or uneducated or belong to the so-called lower castes.

A Human Rights Watch report on deaths in custody has once again put the spotlight on the police torture in India. Rights activists demand a thorough investigation. Murali Krishnan reports from New Delhi.