New Delhi has banned exports of the key Indian kitchen staple to rein in prices that have doubled in recent weeks. It's not the first time the government has acted to control onion supply and it's certainly not the last. 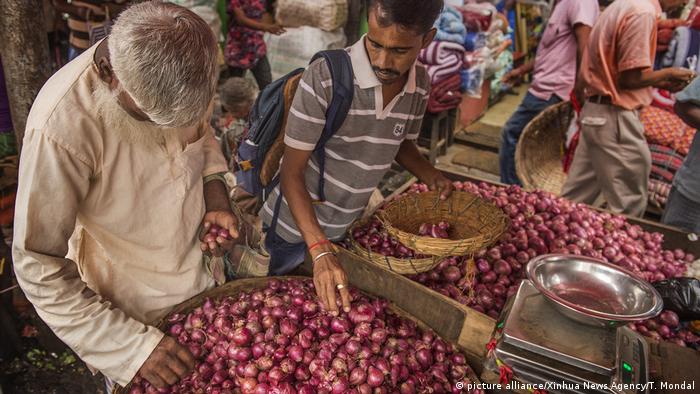 Onion — a common ingredient in Indian cooking — is arguably the most politically sensitive vegetable in India. A spike in onion prices is known to have brought down governments in the past. It's no surprise, therefore, that the Indian government is rushing to limit the political fallout of the recent hike in onion prices just ahead of crucial state elections, including in the key onion-producing state of Maharashtra.

India, which is one of the world's top onion exporters, has banned exports of the vegetable and has imposed restrictions on stocks traders can maintain in a bid to bring down the prices of the key Indian kitchen staple.

Onion prices, which have been steadily rising this year, have doubled in recent weeks in several cities, largely due to excessive rainfall in onion-growing areas. The deluge has added pressure on supplies that were already reeling from last year's drought and a delay in monsoon rains this year.  Retail onion prices are hovering around 60-80 rupees (around €1, $1.1) per kilogram, less than a year after a plunge in onion prices to as low as one rupee per kilogram in some places prompted farmer protests.

"This is a sheer knee-jerk reaction from the government because the percentage of onion exported to total production is very small, around 10%-12%," G Chandrashekhar, an expert on agribusiness, told DW. "The government in my opinion just wants to show that it's taking action."

The government's latest move is part of what has now become a familiar cycle — onion prices go through the roof due to some weather-related event, the government responds by imposing restrictions on exports and a clampdown on hoarders, prices stabilize mainly helped by the advent of new crop, excess supply causes prices to dive southward, prompting farmers to seek support from the government, the authorities ease restrictions on exports, the prices go up before shooting up again due to a weather-related event and the cycle is repeated.

Experts say that the government must break this cycle and not resort to "irrational" measures such as an export ban to deal with supply shocks. They stress that the authorities should instead focus on creating modern storage and processing facilities.

Chandrashekhar also suggests that the government should focus on the production of value-added goods such as dehydrated onions by helping set up processing plants in onion-growing areas.

The export ban is the latest step by the Indian government to reduce the pain of the consumers.

In June, it withdrew 10% export incentives on the vegetable to keep prices in check. Earlier this month, New Delhi moved to curb onion shipments by imposing a minimum export price of $850 per ton — a price that exporters said was too high and would prompt their major importers such as Bangladesh, the United Arab Emirates and Malaysia to turn to China and other sellers.

Critics argue that the government's measures to artificially suppress prices hurt the onion farmers who are constantly fleeced by the middlemen.

"Banning exports is an anti-farmer move. Why should farmers be deprived of getting higher prices," Chandrashekhar said.

The tremors of the ban are being felt in neighboring Bangladesh, where onion prices skyrocketed within hours of the decision.

Onion prices jumped in wholesale markets across the country, The Daily Star newspaper reported, adding that traders feared that prices could climb further.

Bangladesh bought nearly $60 million worth of the vegetable — about 60% of its total onion imports — from India in 2017.

The prices of Indian onions in the UAE, another major importer, are also beginning to rise, the Gulf News reported. Indian onions are popular among South-Asian expats in the country.

Giving farmers the knowledge they need

The number of property claims on plants by companies is rising. This can have dramatic consequences for farmers around the globe, as a case in India shows. (03.09.2019)