India defends its Russia position, criticizes West at Raisina Dialogue | Asia | An in-depth look at news from across the continent | DW | 29.04.2022

A security conference in New Delhi this week has revealed more about India's stance on the Ukraine war and how it intends to chart an independent foreign policy. 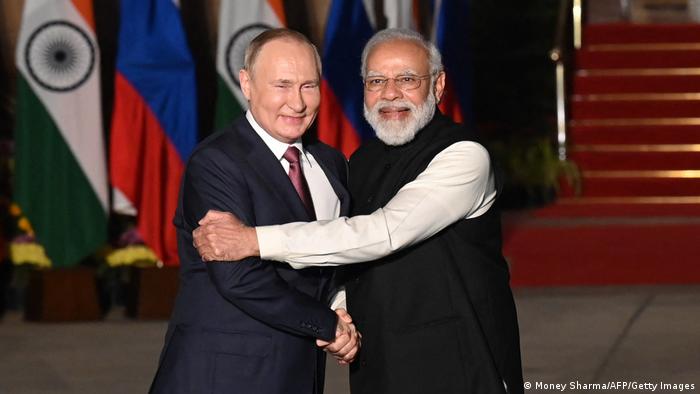 "We have to be confident about who we are. I think it is better to engage the world on the basis of who we are rather than try and please the world as a pale imitation of what they are," Jaishankar told the Raisina Dialogue, an annual foreign policy conference in New Delhi.

"This idea that others define us, somehow we need to get the approval of other quarters, I think that is an era we need to put behind us," he added.

His comments come as India faces international criticism for its ties to Moscow.

At the conference, Jaishankar also criticized the West for its own shortcomings in defending the "rules-based order" during crises in Asia.

"The West should remember what happened in Afghanistan less than a year ago, where an entire civil society was thrown under the bus by the world," Jaishankar said.

"When the rules-based order was under challenge in Asia, the advice we got from Europe is: Do more trade. At least we're not giving you that advice," he added.

Jaishankar's sharp remarks came as several EU leaders at the summit hinted that India should reconsider its position on the invasion of Ukraine and align itself with the West against Russia.

European Commission chief Ursula von der Leyen said on the opening day of the conference that whatever is happening in Ukraine will also have an impact on Asia.

With Prime Minister Narendra Modi listening, von der Leyen suggested that India's close ties with Russia could backfire because Russia and China have already said their friendship had "no limits" and there were "no forbidden areas of cooperation."

Von der Leyen asked what could be expected from the "new international relations” that China and Russia have called for. She also made a veiled appeal for India to support the European Union's sanctions against Russia, saying the measure give "us leverage to achieve a diplomatic solution that will bring lasting peace."

"We urge all members of the international community to support our efforts for lasting peace," von der Leyen said.

India's stand on Russia's invasion of Ukraine will once again become the focus of EU leaders as Modi embarks on a three-day visit to Germany, Denmark and France.

India's sharp response to Western criticism on display at Raisina Dialogue indicates that it might be unrealistic to expect any change.

Could EU change its mind on India?

Although there were many areas where EU leaders noted that the values and interests of India and the European Union converge, the consensus after the conference was one of disappointment, according to Gulshan Sachdeva, a professor at Jawaharlal Nehru University's Centre for European Studies.

"European leaders tried to convey that they feel that India should be taking a much bolder position as far as the Ukraine war is concerned," Sachdeva told DW.

He added that, although the West is disappointed, many leaders are beginning to understand that India is not going to fundamentally change its position and are trying to better understand why India is reluctant to criticize Moscow.

Swasti Rao, a Europe analyst at the Manohar Parrikar Institute for Defence Studies and Analyses, said India was dependent on Russia for arms sales as it deals with security issues on its borders.

Rao added, however, that India does not share Russia's and China's ambition to change the global liberal order.

Lavrov in India amid crippling sanctions

Why is India reluctant to criticize Russia?