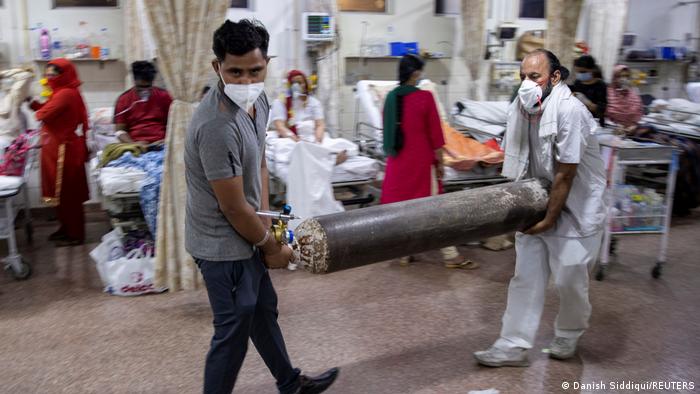 Desperate people have been taking to social media to beg for beds, oxygen or medication

When Anumeha Kumar, who works as a bank clerk in the southern city of Hyderabad, contracted the coronavirus and had to be admitted to a hospital for treatment of severe COVID symptoms, her family was forced to shell out almost 43,000 Indian rupees (€480/$585) to get hold of the antiviral drug remdesivir through the black market.

"We had no other option as she was in need of this and it was not available anywhere. All pharmacies said they had run out of stock and we tried everywhere," Pradeep, her brother, told DW.

The original price for the 100 milligram vial of the drug is anywhere between 1,000 and 5,400 rupees. In India, remdesivir has widely been used to treat patients with severe symptoms.

In the central city of Indore, Rattanjeet Lal, a 45-year-old taxi driver, had to drive around for more than 10 hours in search of an oxygen cylinder for his wife last week, as her oxygen levels dropped sharply.

"I finally managed to get a 30-liter oxygen cylinder for almost 60,000 rupees, for a price that is almost three times as much as it costs in normal times," Lal told DW.

Both Kumar and Lal are among the countless number of people nationwide who have had to turn to the black market to secure essential medical supplies, as the second COVID wave ravages India.

Desperate people have been taking to social media to beg for beds, oxygen or medication.

Against this backdrop the black market is thriving, with dealers hoarding vital supplies and creating an artificial shortage. They then sell them to hapless people at exorbitant rates, fleecing poor patients.

This kind of pandemic profiteering has aggravated patient distress and even led to a loss of lives.

"People are taking desperate measures to try to keep loved ones alive. In some cases, they are turning to unproven medical treatment or otherwise to the black market for life-saving medications that are in short supply," Anil Bhan, a surgeon, told DW.

Despite India's status as the "pharmacy of the world," the biggest producer of generic drugs has been unable to meet the demand for antiviral medications such as remdesivir and favipiravir.

Given that demand has been outstripping supply in the country, police and other investigating agencies have had to crack down on black marketeers.

In the capital, New Delhi, which has been confronting a massive shortage of medical oxygen, police raided a building in a posh neighborhood and seized over 400 oxygen concentrators last week.

"We have arrested several people under sections of the Essential Commodities Act and Epidemic Diseases Act. The hunt is on for the mastermind of this racket, who is a celebrity," said Atul Thakur, a senior police official.

Profiteering amid the pandemic

So far, police have registered over 110 cases and arrested more than 100 for cheating people by promising to help them with vital drugs and medical oxygen. Fifty-two other cases have been filed against black marketing and hoarding.

Even private ambulance operators have been charging exorbitant prices to shift COVID patients to hospitals.

And private hospitals don't have a good record either, with many swindling vulnerable people and charging desperate families hundreds of thousands of rupees.

"I was asked to pay cash upfront for a bed and finally when my mother was discharged after a week, the hospital gave me a bill of nearly 200,000 rupees, which is too much," Paneer Selvan, a mechanic from Tamil Nadu state, told DW.

"Given the unprecedented circumstances aggrieved families face, they have no option but to pay to these ruthless marketers," he said.

'You are looting people,' says court

Many hospitals have also flouted rules on price caps by overcharging for personal protective equipment kits, treatment in intensive care units and hospital rooms, among others.

In some states, courts have had to intervene over the pricing in hospitals.

On Monday, the Kerala High Court expressed concern and said that private hospitals were looting patients.

"We found unconscionable billings, Rs 22,000 for PPE kits. Look at the bills! We saw that the humble rice gruel is charged at Rs 1,300," the court observed. "Imagine the plight of a citizen who earns Rs 1,000 and sees a bill of Rs 200-300,000. We are seeing infections rising rapidly. This is not an isolated case. Anyone can catch the infection now. You are looting people. Think about it, we have to intervene now."

The fleecing continues even after the death of a patient.

With crematoriums in many severely affected cities overflowing, reports suggest that families have had to pay higher prices for the cremation of their loved ones.

On Monday, dozens of dead bodies of suspected COVID-19 victims washed up on the banks of the Ganges river in northern India.

Locals said such sights have become frequent in recent days, ever since officials started dumping bodies into the river after running out of firewood at the crematoriums or because grieving families were unable to pay the high cremation fees.

"At certain places, we received complaints that the public caretakers were asking for a lot of money for doing one cremation. We are looking into it," said a municipal corporation official in Bihar's Buxar district.