The coronavirus surge and the cost of cremation may have led some to dispose of relatives' bodies in the river. Experts fear the death toll is being underreported. 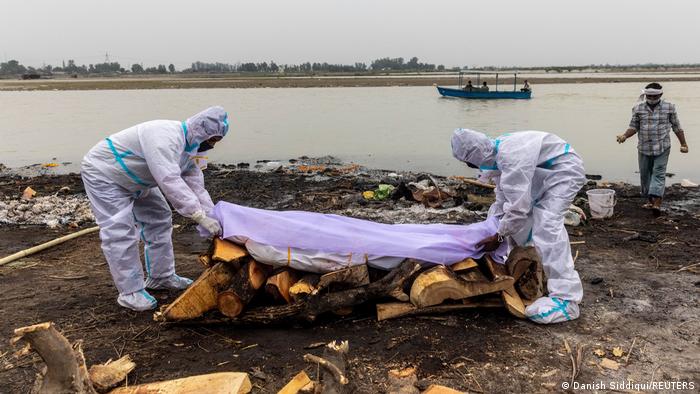 Locals in the northern Indian state of Bihar found dozens of dead bodies on the banks of the river Ganges, media reported on Monday.

The bodies, which floated down from Uttar Pradesh, were of coronavirus victims whose families could not afford the costs of cremation, authorities said.

"Some 35-40 bodies were spotted, many of these could be COVID-19 victims. On normal days we see two to three such bodies on this stretch of river, but the number is high because of the deadly outbreak," local official Naval Kant, told DPA news agency on phone from the town of Chausa where the bodies appeared.

Poorer regions hit by the surge in infections

Some of the corpses had been partially burned and bloated suggesting that they had been in the water for several days.

Locals told AFP news agency that they believed the bodies had been dumped as cremation sites in rural India were being overwhelmed. Many locals, especially in Uttar Pradesh and Bihar, two of India's poorest states, are not able to afford wood for the pyres or to pay workers who are charging more for coronavirus cremations.

National newspaper The Times of India reported that the bodies would undergo autopsies and be given funerals paid for by the government, citing a local official.

Death toll may be underreported

India has become the world's worst coronavirus hotspot with around 4,000 people currently dying every day, according to official figures. The official total death toll has almost reached a quarter of a million.

Cases began to soar following religious gatherings and political rallies that had been permitted by the government. The country has also been ravaged by the B.1.617 COVID-19 variant that appears to be more contagious.

The appearance of the bodies has lent more weight to the suggestion that the number of COVID-19 deaths in India is being underreported — especially now that infections have spread out of the cities and into rural areas with fewer hospitals and poorer record-keeping.