As relations remain tense between India and China over border disagreements, New Delhi is increasingly focusing on developing the Ladakh frontier region that has been neglected for years. 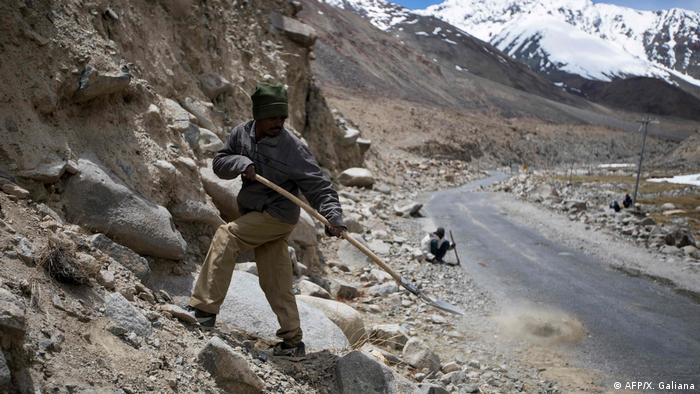 As the stalemate between India and China drags on along the fiercely contested Line of Actual Control, the de facto border between the two countries, the mountainous region of Ladakh is seeing a major infrastructure overhaul, triggering both hope and fear among the local people.

New tunnels and roads are being carved out in the toughest terrains of the Himalayan region, where temperatures plummet to as low as minus 40 degrees Celsius (minus 40 Fahrenheit).

Even the remotest border villages are now being connected to the telephone network and the internet through fiber optic cables powered by solar electricity generation units.

Stanzin is a local councilor from the Pangong sector, a frontier area that has seen a massive deployment of troops since last year.

Pangong Tso lake, the world's highest blue-water endorheic lake spanning eastern Ladakh and West Tibet at an elevation of 14,000 feet (4,270 meters) above the sea level, was a widely publicized friction point between the troops of both countries last year.

In February, however, the two sides agreed to disengage.

One year since clash, India and China disagree on border

Work on an erstwhile narrow unpaved road running parallel to the south bank of the lake has started since then. A 24-foot-wide (7-meter) blacktopped road has come up to the LAC, connecting the villages of Man, Merak and Chushul.

The lake is also a world-famous tourist destination. Since January, one-third of the Pangong Tso lake that remains in Indian control has been opened by New Delhi for tourism. The movement of tourists is being allowed up to Merak, a picturesque village of about 40 houses on the south bank of the lake.

However, for Tenzin Dorjee of Man village, new roads and bridges are an indication of impending trouble. Since last year, the movement of Indian army vehicles in the area has increased.

"It was peaceful here until last year. We were doing business as usual, but now everyone can feel the undercurrents of a crisis that could unfold anytime," said the 60-year-old Dorjee.

Before last year's border crisis, nearly 500 vehicles carrying tourists would enter Pangong Tso lake area every day and many of them would opt for to stay in the nearby villages. Every tourist in the frontier village meant a contribution to the village's economy.

The movement of tourists has now been mostly replaced by Indian army vehicles, which patrol the area throughout the day.

The border conflict, coupled with the COVID pandemic, has affected businesses along the lake.

"Since the Chinese army is now sitting close to us, there is a fear of war and tourists are not willing to stay here for the night. They just come here for sightseeing and leave," he said. 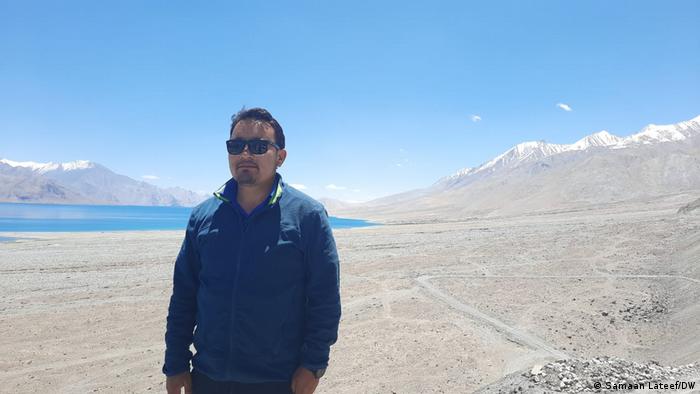 With tourism gone, locals have had to struggle to make ends meet.

As the uncertainty continues, Dorjee has shut his homestay and is now working with the Indian army in road construction to feed his family.

"With no tourists ready to stay at our homes because of the looming threat from China, we are forced to take up menial jobs to support our livelihood," he said.

Dorjee nowadays has a monthly income of 4,500 rupees ($60/€50), with the help of which he feeds his family of four and buys medicine.

Abhishek Sharma, a member of an adventure bikers' group from New Delhi, said they had planned a homestay at Man village but were forced to change the plans because of the situation.

"It doesn't feel safe in the proximity of two armies," Singh said. "I have never seen army personnel deployed across the banks of the Pangong Tso lake before. The presence of the army gives you the sense that you are inside a war zone and not at a tourist spot. There is no reason for us to put ourselves at risk when we can camp 20 kilometers down at Tangtse," Sharma said. Bikers stopped to snap photos at the Daulat Beg Oldi road which leads to Galwan Valley, the site of last year's violent clashes

Abdul Majeed Jamsheed, 65, a retired government official from Hunder village in Nubra Valley, said it would take them six days on horseback to reach Leh town until the Kargil War between India and Pakistan erupted in 1999.

The conflict changed border villages on the western side of Ladakh as they, for the first time, saw the construction of a network of macadamized roads, electricity and telephone connectivity.

"People living in border areas are anyways living in extreme misery. The border conflicts are mostly short-lived. But because of them, frontier people become important for the country overnight, and favors extended to the military are reaped by locals too," said Jamsheed.

After the Kargil War, the picturesque Hunder village transformed into a busy town with a huge rush of foreign tourists who mostly come for camel safaris and camping along the Shyok River.

Every family in Hunder has turned their home into a guest house and is running camping sites for the tourists.

What's behind the China-India border dispute?

A defense official said last year's standoff changed the whole face of Ladakh, prompting New Delhi to accelerate the construction of roads, bridges and tunnels in the region.

"We need infrastructure and roads for the quick movement of our troops to the border. We pressed in combat engineers to complete the construction work planned for five years in just over five months. Since there is no bureaucracy involved in the execution of infrastructure works, it helped us to complete the work quickly," he said.

India is also stepping up efforts to complete the 14.2-kilometer-long (8.8-mile) Zoji La tunnel connecting Sonmarg in Kashmir to Drass town in Ladakh, after it was inaugurated by Prime Minister Narendra Modi in May 2018.

It will reduce travel time and has a strategic requirement for the Indian army as the Zoji La pass is close to India's de facto border with Pakistan and vulnerable to hostile actions.

Stanzin, however, said India should make the development of border areas a priority instead of waiting for the eruption of conflicts.

"Border people are living in miserable conditions and the intent of the government should be to improve their living standards without war," he said.