India battles floods amid spike in extreme weather events | Asia | An in-depth look at news from across the continent | DW | 25.11.2021 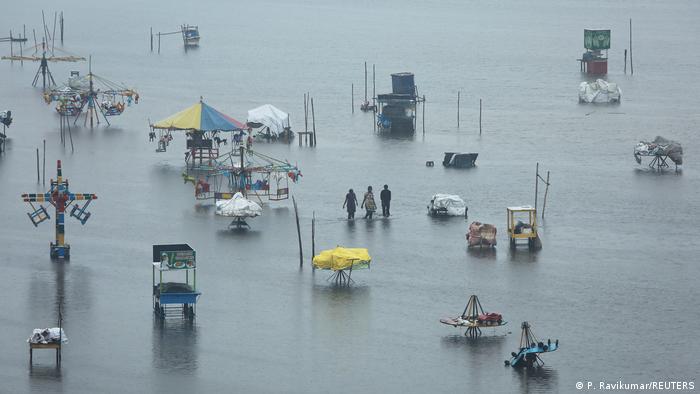 After dozens lost their lives in severe flooding in southern India, environmentalists are calling on government officials to prioritize climate-proof infrastructure and take measures to prevent further destruction due to major weather events.

India's tech hub Bengaluru was recently inundated by floodwaters, following torrential downpours that killed scores of people across the south of the country over past weeks.

Lakes surrounding the city, which is the capital of the southwestern Karnataka state, overflowed after three days of ferocious downpours. This submerged roads, flooded homes, and left more than 24 dead across the region.

Meanwhile, neighboring Andhra Pradesh state is continuing to reel from the aftermath of heavy rains and flash floods that wreaked havoc on the state, killing at least 34 people. As a result, more than 50,000 people have been lodged in relief camps in the four worst-affected districts.

Additionally, hundreds of vehicles and passengers were stranded after primary rail and driving routes were closed.

"Clearly, the northeast monsoon rains are in excess this time. Yes, these are extreme weather events, but I do not know whether this will become the new normal in the coming years," IMD Director-General Mrutyunjay Mohapatra told DW.

Many scientists believe such extreme rainfall events will become more frequent over the coming years. In the face of this, some are calling on officials to prioritize the  climate-proofing of infrastructure.

As monsoon floods raged across the subcontinent in August this year, the Intergovernmental Panel on Climate Change (IPCC) published its sixth assessment report, which again noted increasing frequency of heavy precipitation events since the 1950s and connected them to human-induced climate change.

A new study released by Delhi-based Council on Energy, Environment and Water (CEEW) in October, ahead of the COP26 summit in Glasgow, maps India's climate vulnerability. The study showed that southern regions are the most vulnerable to extreme climate events and their compounding impacts.

Additionally, according to the CEEW, more than 80% of India's population live in districts highly vulnerable to extreme disasters, including drought, flooding and cyclones.

What's more, only 63% of the country's 748 districts have an official disaster management plan, and only a third of those that do have plans have updated them beyond 2019, the study found.

'A surge in extreme events'

Given that India is the seventh-most-vulnerable country with respect to climate extremes, climate action needs to be scaled up at both the subnational and district levels, according to Germanwatch, a Bonn-based nongovernmental organization.

"India needs to do a granular risk assessment that will account for hazards, risks and vulnerability. A surge in extreme events has been observed across India after 2005. Our sensitivity analysis shows that this is primarily triggered by landscape disruptions," Abinash Mohanty, an author of the CEEW study, told DW.

"We also need to undertake climate-sensitive landscape restoration focused on rehabilitating, restoring, and reintegrating natural ecosystems as part of the developmental process," he added.

Other experts believe that mitigating floods and droughts should require fitting irrigation structures to capture rain, acting as both a sponge during flooding and a storehouse during drought.

"We are getting our water management wrong, we are building in floodplains, destroying our water bodies and filling up our water channels. We now see more rain and more extreme rain events," Sunita Narain, director-general of Delhi-based Center for Science and Environment, told DW.

"It means linking rivers to ponds, lakes and ditches so that water is free to flow. This will distribute the water across the region and bring other benefits like recharging groundwater," she said.

In most cities, waterways have typically been overlooked in the name of urban growth.

After the devastating floods in Chennai in 2015, experts pointed out that the biggest culprit encroaching on urban waterways and wetlands was actually the state government, which had built runways, bus terminals and industrial parks by filling in and paving over bodies of water.

Add to this a promise of increased precipitation as climate change marches on.

In recent years, weather officials have pointed out that the surface water temperature of the Arabian Sea has risen from 27 degrees Celsius (80 degrees Fahrenheit) to 29 degrees, which is causing more frequent formation of low-pressure areas and cyclonic circulations, resulting in heavy rains.

Dozens have died after heavy rainfall triggered floods and landslides in the southern Indian state. Experts think climate change will lead to more frequent extreme weather in the region.

Bringing back water in the Indian Himalayas