Nagaland has prohibited the sale, import and trade of dogs to be used for food, in a move celebrated by activists. An estimated 30,000 dogs a year were smuggled and reportedly "beaten to death with wooden clubs." 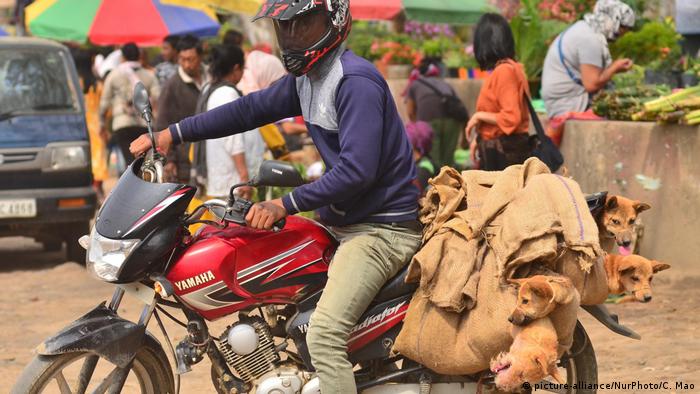 India's northeastern state of Nagaland has issued a ban on dog meat, as well as the import and trading of dogs to be used for food, authorities announced Saturday.

Animal rights activist and politician of the ruling Bharatiya Janata Party Maneka Gandhi had called on the state government to put an end to the state's dog trade.

Gandhi launched an appeal after she received photographs of the dog market from a local animal rights group.

More than 125,000 people supported her appeal then wrote to the Nagaland government and urged a ban on the state's dog trade.

"The State Government has decided to ban the commercial import and trading of dogs and dog markets and also the sale of dog meat, both cooked and uncooked," tweeted Nagaland Chief Secretary Temjen Toy

Animal protection advocacy group Humane Society International (HSI) estimates that up to 30,000 dogs a year are smuggled into Nagaland and then sold in live markets. According to the group, the dogs are often "beaten to death with wooden clubs."

"This is a major turning point in ending the cruelty in India's hidden dog meat trade," HSI said in a statement. The group had campaigned for years to end India's dog meat trade.

The Federation of Indian Animal Protection Organisation (FIAPO) and the People for the Ethical Treatment of Animals (PETA) also spearheaded the campaign. They praised Nagaland's decision as a "major turning point" in ending cruelty to dogs in India.

"The suffering of dogs in Nagaland has long cast a dark shadow over India, and so this news marks a major turning point in ending the cruelty of India's hidden dog meat trade," HIS managing director Alokparna Sengupta said.

"This is a progressive move. In this day and age, positive social media activism and advocacy has an enormous impact on policymakers. Congrats and thanks to all," tweeted Abu Metha, an advisor to Nagaland's highest elected official Neiphiu Rio.

Some civil society groups criticized the ban, calling it an attack on Nagaland's food customs. While eating dog meat is illegal in parts of the country, some communities in northeastern India consider it a delicacy while others cite issues of hunger and malnourishment as well as a lack of available food options.

Animal rights advocates say thousands of dogs each year are illegally captured for consumption from the streets or from homes in other northeast Indian states, including Mizoram, Tripura and Arunachal Pradesh.

For those already battling infectious diseases in India, their suffering is compounded with the devastating impacts of the coronavirus pandemic. Tanika Godbole reports from New Delhi. (02.07.2020)

Vietnamese officials in Hanoi have asked residents to stop eating dog meat, citing health and public image concerns. Vendors and enthusiasts now fear a nationwide ban on what they consider to be a traditional delicacy. (08.10.2018)