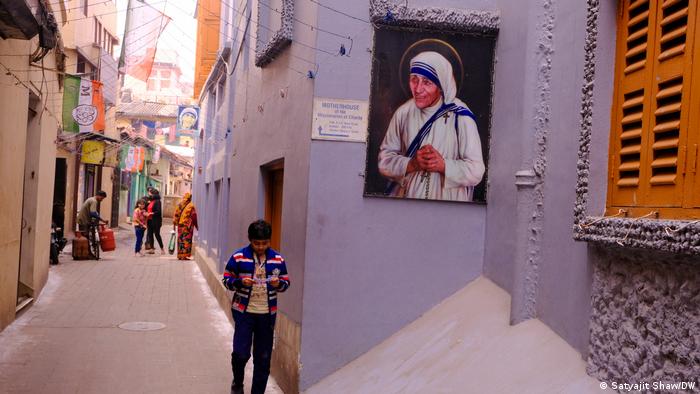 Missionaries of Charity was founded in 1950 by Mother Teresa, a Catholic nun who devoted most of her life to helping the poor in Kolkata city

The Indian government's recent decision to cut off foreign funding for a charity founded by Mother Teresa has drawn sharp criticism from NGOs and rights activists.

In a statement issued by the Home Ministry on December 25, Prime Minister Narendra Modi's government seemed to use unspecified contributions to justify its decision to refuse permission to the Missionaries of Charity (MoC) under the Foreign Contribution Regulation Act (FCRA).

"While considering the MoC's renewal application, some adverse inputs were noticed," the ministry noted, without providing details.

The charity — founded in 1950 by Mother Teresa, a Catholic nun who devoted most of her life to helping poor people in the eastern city of Kolkata — has more than 3,000 nuns worldwide who run hospices, community kitchens, schools, leper colonies and homes for abandoned children.

Mother Teresa won the Nobel Peace Prize for her work and was later declared a saint.

The MoC, which runs shelter homes across India, received about $750 million (€660 million) from abroad in the 2020-21 financial year, according to The Hindu newspaper.

The MoC said in a statement that it had instructed its centers not to use any foreign currency account "until the matter is resolved."

The organization, however, rejected reports that its bank accounts had been frozen.

The government's move came just two weeks after police in Gujarat state began investigating the charity for "forceful conversion" of Hindus to Christianity.

Hard-line adherents of Hinduism, India's majority religion, often accuse the MoC and other Christian charities of engaging in religious conversions.

Modi's government rejects reports that officials have a radical "Hindutva" (Hindu hegemony) agenda and insists that people of all religions have equal rights.

"While FCRA permissions are largely denied to these organizations, other outfits that are aligned to the Hindu right wing are allowed to receive funds with little or no scrutiny," renowned criminal lawyer Rebecca John told DW.

"FCRA has now become weaponized to compel organizations and trusts which work in the NGO sector to close their foreign accounts and thereby minimize their work in India," John said.

Many NGOs hit by restrictions

This is not the first time the Indian government has denied permission for an NGO to receive foreign funding.

Henri Tiphagne, executive director of People's Watch, which specializes in campaigning against social injustice and discrimination, said his organization's foreign funding was suspended under the previous government in 2012 after it opposed the construction of a nuclear power plant in the southern state of Tamil Nadu.

The group is still contesting the matter in the courts. Tiphagne called Modi's actions "a complete witch hunt."

In 2020, the rights group Amnesty International announced that it was halting operations in India, citing a "continuing crackdown" and "harassment" by Modi's government.

Amnesty's bank accounts had been frozen by India's Enforcement Directorate, a governmental investigative agency, forcing it to lay off its 150 staff members and stop campaign and research work.

Other organizations — including Sabrang India, Lawyers Collective and Navsarjan Trust — were also targeted under the FCRA.

These organizations opposed religious intolerance, campaigned for the empowerment of marginalized groups and exposed violations against Dalit people, respectively. In response, they faced repeated questions about their work, threats of investigations and blocked foreign funding.

Groups such as Greenpeace India and the Ford Foundation have also been hit with restrictions.

With the bulk of the NGOs' funding cut, many have found it difficult operate and decided to shut shop.

People working for the organization say they were surprised by the decision, as CHRI works with stakeholders in the government.

They challenged the move at the Delhi High Court and are awaiting its verdict.

"The National Human Rights Commission, state police and prison departments, and legal aid institutions recognize CHRI as a resource partner and expert in the domains of police and prison reform and transparency in governance," CHRI director Sanjoy Hazarika told DW.

"We are an acknowledged specialist in the field of right to information," Hazarika said.

"It unfortunately indicates a lack of confidence when a proud democracy cannot tolerate either criticism or the ability of groups to address entrenched social inequity," she said.