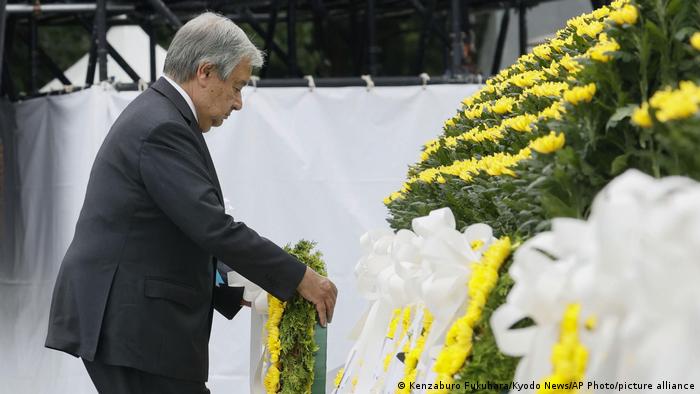 United Nations Secretary-General Antonio Guterres warned on Monday that the risk of a nuclear arms race was returning to the world, and implored nuclear-armed countries to stick to their no-first-use policies.

"This is the moment to ask the nuclear-armed countries to commit to the principle of non-first-use and to commit to not use and not threaten the non-nuclear countries," he said.

Guterres is in Tokyo two days after he visited Hiroshima to commemorate victims of the August 6, 1945, atomic bombing. The anniversary of the Nagasaki atomic bombing is on August 9.

Russia's threat of a nuclear attack against Ukraine has recently fanned the fears of a third atomic bombing.

"I think that nobody, nobody can accept the idea that a new nuclear war would happen. This will be the destruction of the planet," said Guterres. "What is clear is if nobody uses for the first time then there will be no nuclear war."

He said recent modernization of nuclear arsenals shows that the world is "moving backwards" — after a period in the aftermath of the Cold War when the numbers of nuclear warheads were reduced. The billions of dollars being used in the arms race should be spent on more pressing issues such as fighting climate change and poverty instead, he said.

Guterres decried the fighting in Ukraine for control of the nuclear plant, calling any attack on a nuclear power plant "a suicidal thing." Over the weekend, Ukraine accused Russia of shellfire near the site on Saturday, which is under the control of Russian forces but being administered by Ukrainian technicians. On Monday, Russia alleged that Ukraine had targeted the site on Sunday.

Meanwhile, IAEA chief Rafael Mariano Grossi also warned that the latest reports of fighting near the site "underlines the very real risk of a nuclear disaster."