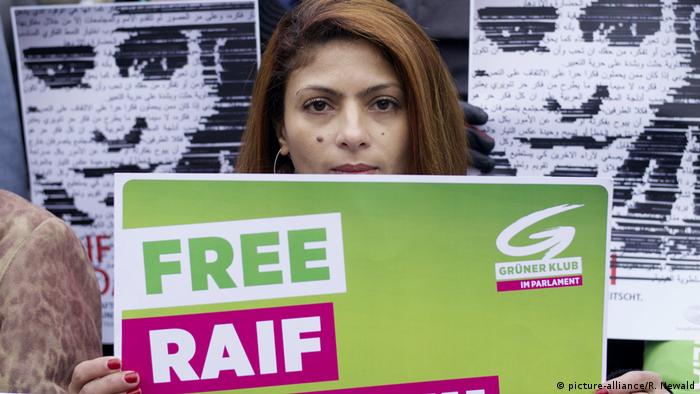 The wife of imprisoned Saudi blogger Raif Badawi said on Twitter Thursday that she hadn't heard from her husband for nearly a month.

Ensaf Haidar, who was granted Canadian citizenship a year and a half ago and currently lives in southern Quebec with the couple's three children, said she'd had no contact with Badawi since January 14. She said that Badawi "used to call me and my children on a regular basis," and also said that she had been unable to reach officials at the prison.

"This silence is very worrying … I fear the worst," she concluded.

Badawi was detained by Saudi authorities in June 2012 and landed in court the following year for operating an atheist blog in Saudi Arabia.

The blogger and journalist was outspoken about Wahhabism, the state religion in Saudi Arabia, as well as challenging the power of clerics in the country.

He was sentenced in 2014 for setting up an online forum focused on Saudi Arabia's social and political debates. On the website, Badawi urged "freedom and respect" for differing ideas. The court convicted Badawi on charges of apostasy, or insulting Islam.

The blogger was sentenced with 1,000 lashes. In 2015, Badawi was subjected to the first set of 50 lashes in public, although Saudi Arabia stopped the corporal punishment after international outcry.

In September last year, Badawi began a hunger strike to protest mistreatment by Saudi prison officials. Haidar had tweeted at the time that "the prison director wants Raif to continue the strike!"

In early 2019, the international non-profit Reporters Without Borders sent a team to Saudi Arabia to lobby for Badawi's release as well as 29 other incarcerated journalists.

Haidar has led a prominent global campaign, calling for the release of her husband so that he can one day reunite with his family.

She also helped set-up the Raif Badawi Award for journalists who shed light on human rights abuses in the Muslim world.

Haidar continues to advocate for her husband's freedom.

Washington, which usually refrains from criticizing human rights violations in Saudi Arabia, has called for the release of blogger Raif Badawi. The writer was whipped and sentenced to prison for "insulting Islam." (19.07.2019)

The wife of Saudi blogger Raif Badawi says he has ended his hunger strike after being visited in jail by a Saudi human rights commissioner. Badawi was lashed publicly and jailed in 2014 for allegedly insulting Islam. (22.09.2019)