Immigration to Israel: 'One man's joy is another man's suffering'

Israel was founded as a Jewish homeland and its immigration reflects this, starting with the first post-World War II refugees. While Israel has become more diverse over the decades, its doors remain closed to some. 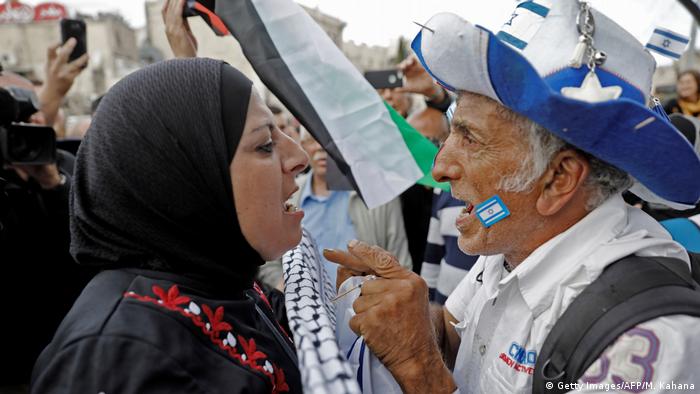 Seventy years ago, on May 15, 1948, when British forces withdrew from Palestine and David Ben-Gurion proclaimed Israel's independence, Moshe Zimmermann stood on a balcony with the flag of the newly founded state of Israel in his hand. Today, seven decades later, Zimmermann is not sure he can really remember that day. Perhaps the stories his family told him and an old photo of him as a child have colored the image he has in his own mind. Zimmermann is a historian, and he knows that memories can be tricky.

But one thing is clear: Back then the Jewish people celebrated the founding of their own state, something they had long desired. And today, 70 years and many wars later? Is that day something that should be celebrated in such grand fashion? Moshe Zimmermann takes a long pause and says: "One man's joy is another man's suffering."

The professor emeritus from the Hebrew University of Jerusalem, who also taught in Germany for many years, says the Jewish people certainly "have reason to celebrate." For back then, after the unimaginable horrors of the Holocaust and the Second World War, Israel was a refuge for those who survived the war and had lost all faith in their home countries. In the first years, many refugees came from Europe. Many spent months in provisional camps.

But Zimmermann stresses that not everyone had reason to celebrate back then: "The people of Palestine suffered as a result." For them, the day meant the beginning of their refugee flight — and also their displacement. Israel's Arab neighbors immediately declared war after the Jewish state was founded. By 1949, the tiny young country had emerged victorious. German-Israeli historian Tamar Amar-Dahl says the war went hand-in-hand with a "massive eviction." The result: 750,000 Palestinians were displaced or fled during the course of the conflict. For Amar-Dahl, who teaches at the Free University in Berlin, among others, those Palestinians were the "ultimate victims" of history.

Read more: Israel marks its 70th anniversary, but not everyone shares the joy

What remained was a sparsely populated country, in which Zimmermann says roughly half a million Jews and some 100,000 Palestinians lived. At the time, about 90 percent of the Jews were from Europe, mostly eastern Europe. The historian says many of them had experienced the highly aggressive and often anti-Semitic nationalism of the early 20th century in their home countries: "The national reaction of the Jews was a desire for self-defense as well as the use of force." Zimmermann speaks of a "bellicose" Jewish nationalism brought by immigrants, a sentiment that still exists today.

Both Zimmermann and Amar-Dahl describe a country that has historically welcomed, indeed, continued to actively seek Jewish immigrants from other countries. Yet, Israel shuns other refugees and immigrants. "They set a clear limit: admission for Jews only," says Zimmermann. Above all, that applies to Palestinians, who have hoped to be able to return to their homeland for decades. But it applies to non-Jewish Africans hoping to find refuge in Israel as well.

Many of those refugees are now coming from Eritrea. Zimmermann says the state of Israel views them with a sense of "aversion." It is said that between 40,000 and 60,000 "illegal African refugees" currently live in Israel, where they are often forced to live in camps. Such people are regularly referred to as "intruders" by Israeli Prime Minister Benjamin Netanyahu. The prime minister consistently underscores the fact that the state of Israel is making great efforts to get them out of the country. Historian Amar-Dahl says that although Israel is not a theocracy, it sees itself as a Jewish state for Jews in particular: "That is its raison d'etat." 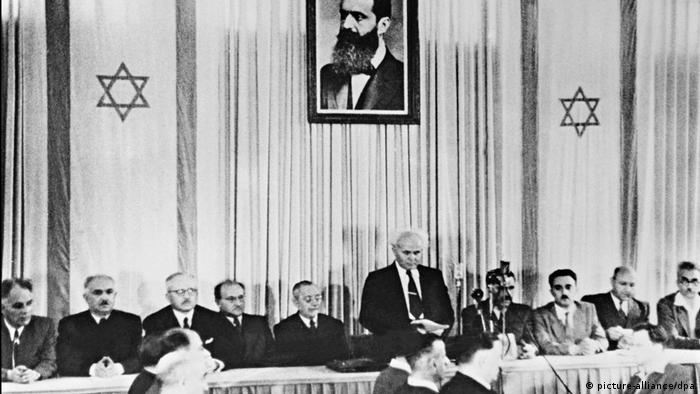 David Ben-Gurion declared the founding of Israel on May 14, 1948

Jews have been expressly welcome in Israel since its founding. That fact is codified in the Law of Return, which guarantees all Jews the right to immigrate. In the 1950s and 60s, many Jews from North Africa, Iraq, Egypt and Iran emigrated to Israel. Amar-Dahl says their reasons were manifold. Some were motivated by the religious desire to move to the land of the Jews. Others feared that conflicts between Israel and its Arab neighbors could threaten their status or even their lives. "The Arab nationalism of the 1950s and 60s was certainly a major impetus for many Arab Jews to emigrate to Israel," adds Amar-Dahl.

Zimmermann says that wave of immigration changed Israel: Previously populated by a majority of eastern European Jews, society suddenly became more colorful. Since the mid-1960s roughly half of Israel's population has been made up of citizens with Afro-Asian roots.

The early 1990s brought a new "demographic revolution." The Soviet Union had prohibited Jews from emigrating to Israel, but when it collapsed, one million Jews made their way to the Jewish state, altering it once again. Zimmermann estimates that today about one-eighth of Israel's 8 million citizens are from the former Soviet Union. Those who came brought their own culture and language with them, and they maintain both in their new home. That is why one hears so much Russian spoken on the streets, Zimmermann adds, for many new Israelis are far less likely to learn Hebrew than previous generations of immigrants. 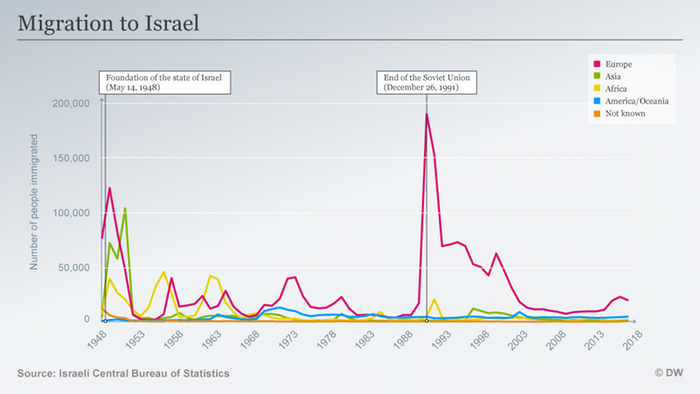 Is Israel experiencing another wave of European immigration made up of those fleeing growing anti-Semitism on the Continent? Zimmermann plays down the question. No doubt anti-Semitism exists in Europe, he says, but not nearly as many European Jews are coming to Israel as the government likes to make it sound. That, he claims, is Israeli propaganda. Zimmermann is convinced that Jews who no longer feel safe in Europe are much more likely to emigrate to Canada or the US.

The reason, according to Zimmermann, is that "Israel's attraction has faded." Israel is engaged in a never-ending conflict with its neighbors and Europe is not the same as it was after the war, when large swathes of business and society had to be rebuilt. Historian Amar-Dahl points to the dynamism that the Middle East conflict has developed since the turn of the new millennia, listing the Second Intifada, the Gaza conflict and the war in Lebanon. She could just as well add the war in Syria and heightening tensions with Iran. The historian says she is no longer so sure Israel is the safe haven it was when it was founded.

Child labor on the rise in Africa