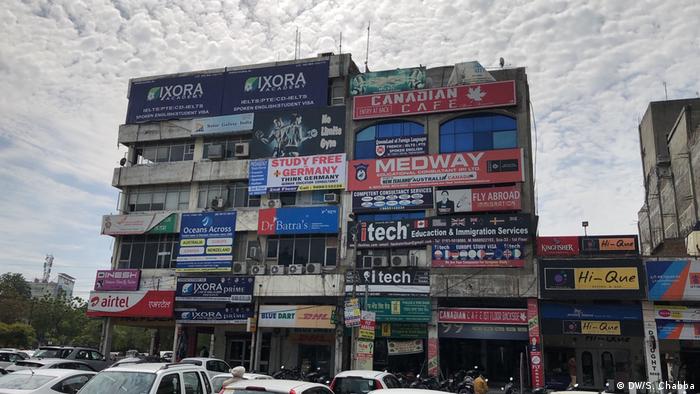 Arranged marriages are common in South Asia. But a new trend in the Indian state of Punjab is reshaping the way young people get married. It involves choosing a partner based on their English language proficiency.

In recent years, many young men and women in the state have increasingly faced issues like economic disillusionment and drug abuse.

In search of a better life, they often seek migrating to countries like the US, Canada or Australia. They usually want to find work in these countries, either as unskilled or semi-skilled labor.

For their part, the young men's parents look for young girls with a drive to study and get their sons married to them. The agreement is that the girl scores well in English language proficiency tests and get admitted into a foreign educational institution. The groom's family then pays for the girl's education and for the couple to move abroad.

As a result, hundreds of International English Language Testing System (IELTS) coaching centers have opened up in the state. A good score in IELTS increases the chance for a "good marriage."

How do 'IELTS marriages' work?

Simarpreet, a 22-year-old girl, finished her studies two years ago. Since then, she has been commuting 60 kilometers (37.2 miles) — back and forth — to an IELTS language center in Amritsar to improve her English language skills. She needs to get a good score — at least 6 on a scale of 9 — to fulfill her dreams.

Karanvir didn't finish college due to a lack of interest in studies. His parents, farmers in Punjab's Tarn Taran district, own some land, but Karanvir isn't interested in agriculture either. All he wants is to leave India for a Western country.

A professional matchmaker approached Simarpreet's and Karanvir's families to fix their marriage.

To obtain a student visa for a foreign country, Simarpreet needed to get a good IELTS score and hoped that she can also take her future husband with her. In return, Karanvir's family is willing to pay for the wedding, Simarpreet's education, and the costs for sending the couple out of the country.

It was just a verbal agreement. Simarpreet and Karanvir only tied the knot once Karanvir received his visa.

In some cases, girls are required to take the IELTS test after the wedding. They could be divorced if they failed to get a good test score and take their husbands out of the country with them.

Read more: The rise of the big fat Punjabi wedding

Canada, the UK and the US are favorite destinations for many people in Punjab. But in the past few years, these countries have tightened their visa rules. For instance, spouses aren't always eligible to work on a student visa, especially if the student isn't pursuing a full-time degree.

In New Zealand, such visas are only offered if the student is pursuing a "level 7 or 8" qualification on the country's Long Term Skill Shortage List, or a "level 9 or 10" qualification, which is a master's or a doctoral degree. The former includes degrees in engineering and medicine, among others.

Most girls traveling from Punjab do not fulfill these criteria. They usually apply for short-term language or vocational courses.

Some people say the practice is a new kind of dowry. In many parts of South Asia, the bride is expected to bring items of value — furniture, jewelry or money — to her husband's household as a precondition for the wedlock. The inability to fulfill dowry conditions could jeopardize the marriage, often resulting in abuse.

"There is no authentic data about 'IELTS marriages,' which makes it difficult to analyze," a senior bureaucrat from the state told DW on condition of anonymity. "However, this practice could put an end to a systematic discrimination against women. It is kind of a 'reverse dowry.'"

After getting married to Gurpreet, Sukhman fell short of the 6-band requirement in IELTS. She was fortunate that her in-laws didn't think it was a good enough reason to end the marriage. Many other girls are not so lucky.

Women's rights organizations in the state have expressed concern about this practice, saying that women who are unable to hold up their end of the bargain are often subjected to domestic violence.

"I have come across several cases in which the in-laws start harassing the girl if her IELTS score is insufficient to study abroad," Manisha Gulati, chairperson of Punjab's official commission for women, told DW.

"Then they start demanding dowry, as the girl hasn't met the main prerequisite for the marriage," she added. "Government's intervention and a change in mindset is crucial to ending this practice."

[Editor's note: Protagonists' names have been changed to conceal their identity.]