Germany have lost their third group-stage game at the 2018 Ice Hockey World Championship. Their best performance at the tournament so far was undone by a series of penalties in the second period. 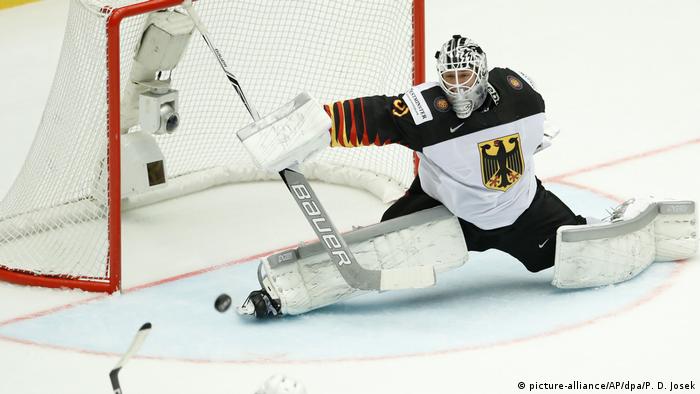 Having lost their first two games in penalty shootouts, Germany's national ice hockey team came into Monday's Group B match looking to take away all three points and put themselves put themselves on course for a possible berth in the quarterfinals of this Ice Hockey World Championship in Denmark. However, they were up against a much tougher opponent than either the hosts or Norway – in the form of the United States – and came up short, losing the contest 3-0.

Head coach Marco Sturm will have liked a lot of what he saw in the first 20 minutes, with the Germans looking much sharper than they had against their previous two opponents in Herning. However, they only got out of the period with a scoreless draw due to the strong play of netminder Niklas Treutle, who made 11 saves, including what must have been the save of the tournament so far.

The Germans came out of the dressing room for the second hoping to build on that performance, but they quickly got themselves into trouble by taking four consecutive minor penalties. Treutle continued his heroics in the German net, thwarting the American forwards' efforts over and over – until midway through the period.

It took an almost perfect shot to finally beat Treutle, and it came late in a 5-on-3 powerplay for the United States. Patrick Kane beat the German netminder over his left shoulder with a one timer from the faceoff circle to his left to give the Americans a 1-0 lead in the 11th minute of the second period.

The next goal followed just over two minutes later, with Germany yet again on the penalty kill. This time it was Derek Ryan who beat Treutle from close range, while defenseman Moritz Müller was cooling his jets in the sinbin after getting called for hooking. Germany finally got their first chance on the power play a few minutes later, but never seriously troubled the American goalie, Keith Kincaid.

In the third period, the Germans gave a better account of themselves, and the fact that they stayed out of the penalty box probably had a lot to do with it. Approaching the halfway mark of the period, the Germans had even created a few scoring chances, but were unable to beat Kincaid.

Third US goal seals the deal

In the 10th minute though, the Americans added a third goal, which pretty much came out of nowhere. It started with Jonas Mülller carelessly coughing up the puck deep in his own zone. Kane picked up the biscuit behind the German net and passed it into the slot to Alex Debrincat, who one-timed it into the basket.

So Marco Sturm's men who surprised everybody by winning the silver medal at the Pyeongchang Winter Olympics just over two months ago, go into Wednesday's game against South Korea needing a win to keep their slim hopes of reaching the quarterfinals alive. Sturm, who has a much younger team in Denmark than he had in Korea, will be encouraged by the fact that this was Germany's best of their first three games. Ironically though, it was the first in which they failed to earn even a single point.