The new US ambassador to Russia, Jon Huntsman, has presented his diplomatic credentials to Vladimir Putin in Moscow. He takes up the post at an especially contentious time in relations between the two countries. 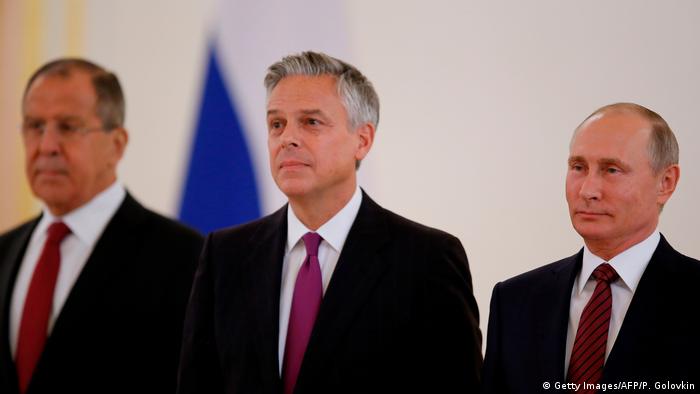 The new United States ambassador to Russia, Jon Huntsman, met with Russian President Vladimir Putin during a Kremlin ceremony in which the American presented his diplomatic credentials. The 57-year-old statesman and businessman will need all of his diplomatic skills if he is to help repair a relationship his predecessor John Tefft said was at a "low point."

Inside Europe: Who 'Trumped' whom?

Inside Europe: Who 'Trumped' whom?

Relations between Moscow and Washington have deteriorated to their lowest point since the end of the Cold War, and have been marked by tit-for-tat retaliations that began with US sanctions on Russia for its annexation of Crimea and subsequent support for separatists in Eastern Ukraine. Relations have continually worsened amid accusations of Russian meddling in the 2016 US presidential election.

Disagreeing with the boss?

During his Senate confirmation hearings last week, Huntsman made clear what he thought about the accusations, despite statements by Trump calling them a hoax: "There is no question, underline no question, that the Russian government interfered in the US election last year.” Adding, "Moscow continues to meddle in the democratic processes of our friends and allies.”

The billionaire businessman, whose family company has holdings in Russia, will also take up his post with a greatly diminished team after Russia's Foreign Ministry ordered the US to cut staff by two-thirds in July in response to new US sanctions, leaving the US with 755 fewer employees on the ground.

Huntsman has promised to confront Russia in addressing human rights abuses and over its actions in Ukraine and Syria. But it would seem that his first order of business may be to defuse a diplomatic row that erupted upon his arrival in Moscow. Russia's Foreign Ministry on Tuesday announced that US authorities had broken into residencies at Russia's San Francisco consulate and threatened retaliation for what Moscow called a hostile and illegal act. Washington ordered Russian staff to vacate the consulate last month as part of the diplomatic tug-of-war.

Huntsman, the former governor of Utah, has served each US president since Ronald Reagan in some capacity. Among other roles, he was the US ambassador to Singapore in 1992-1993 under George H.W. Bush and later Bill Clinton, then ambassador to China from 2009 to 2011 under Barack Obama. Huntsman also served as President George W. Bush's deputy US trade representative, and was the acting chairman of the foreign policy think tank the Atlantic Council when he was tapped by President Donald Trump to take up the Moscow post. In 2012 he ran as a Republican party candidate for the US presidency.

Trump to nominate Huntsman as ambassador to Russia