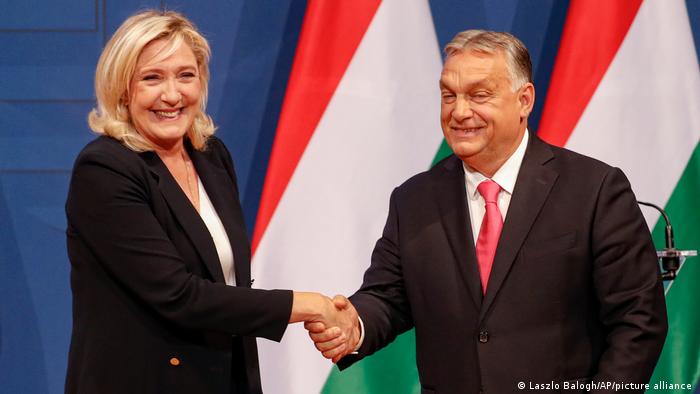 Le Pen, a perennial candidate for president of France, is expected to run again next year, and used the visit to the Hungarian capital to boost her nationalist bona fides.

The visit comes as a challenger has emerged from the French far-right in the form of author and TV pundit Eric Zemmour, whom Orban hosted last month.

From Budapest, Le Pen railed against the EU at a joint news conference and lent her support to Hungary and Poland, both countries that have faced criticism from Brussels over the erosion of the rule of law, press freedom and the independence of the judiciary.

Le Pen, who is cozy with Russian President Vladimir Putin and whose party has accepted financing from Russian banks, went so far as to compare the EU to the Soviet-backed communist regime in the last century in Hungary.

"In this month of October, the moment and the circumstances can only inspire us to think fondly of the heroes of the 1956 uprising," she said in reference to the failed revolution that resulted in the death of around 2,500 Hungarians and the continued domination of the country's political scene by Moscow for 33 more years.

She has often said if she wins the French presidency next year, which pollsters say is a long shot, her party would hold a referendum on France's EU membership.

What did Orban say during the meeting?

At the joint news conference, Orban, who also faces a critical election next year, called Le Pen a "sovereigntist" and praised her for her support.

Orban said Le Pen would help renew the European right, adding that "this renewal can only happen if we enter into alliances with one another."

For Orban, hosting Le Pen represented an about-face as he had told the American magazine The Atlantic in 2019 that cooperation with Le Pen was "a red line."

"I have nothing to do with Madame Le Pen," he said in the interview.

During her visit to Budapest, Le Pen also voiced support for Poland, which is challenging the primacy of EU law over Polish law.

Poland has declared several articles in EU treaties "incompatible" with the Polish constitution.

In Brussels last week on the sidelines of an EU summit, Le Pen met with Polish Prime Minister Mateusz Morawiecki.

The move shocked many in Poland given the ruling Law and Justice Party has in the past refused to engage with Le Pen due to her open affinity for Russia's leader and accepting Russian funding.