Hungary has introduced tough new laws to stop refugees crossing into the country via "green borders," claiming it was necessary to control the influx. Passport checks have now been reintroduced into Austria and Slovakia. 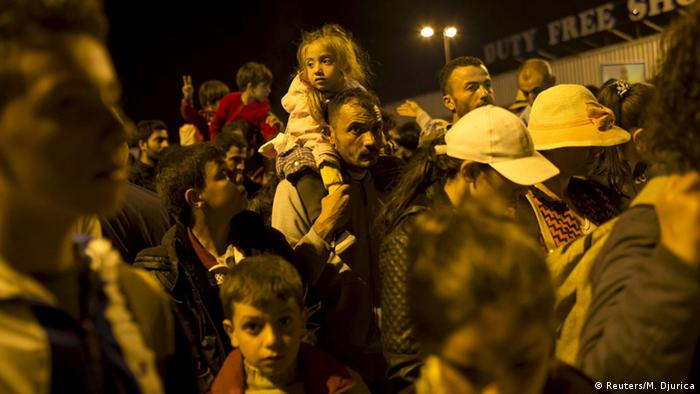 Hungary has said it will no longer tolerate people entering the country without passing through official checkpoints, after the country completed a 175-kilometer (108-mile), 3.5-meter (11.4 feet) high fence along its southern border with Serbia.

Those entering the country in a way deemed illegal by the Hungarian government face imprisonment or deportation.

Speaking early Tuesday, government spokesman Zoltan Kovacs said Hungary would introduce new regulations from midnight onwards. He stressed that it did not mean the country was closing its doors on all refugees.

"We are going to have a new set of rules here in Hungary concerning the natural borders," said Kovacs.

"We are going to close the green borders, the natural borders to stop illegal border crossings. That also means that the official and legal ways to come to Hungary, and therefore to the European Union, remain open. That's all we ask from all migrants - that they should comply with international and European law and, say the Schengen protocols, and they should come to the legal crossing points."

Hungary was allowing migrants to leave the country northward, with the Austrian border town of Nickelsdorf overwhelmed on Monday.

However, Kovacs told the Reuters news agency that Hungary would reject asylum seekers entering from Serbia - which Hungary deems safe - who had not previously sought asylum there. He said the refugees would face expulsion within eight days.

"Certainly, as that is the international legal rule, therefore it must be done that way," Kovacs said, when asked if the migrants would be turned back.

Austria and Slovakia on Monday followed Germany's lead in reinstating border controls to deal with the flow of people. Poland said it was considering similar steps, and the Netherlands said it was putting in place "more patrols" on its frontiers.

There were long traffic jams on the Germany-Austria border on Monday, with checks in place on border roads and trains.

Luxembourg Foreign Minister Jean Asselborn, after chairing a meeting of EU interior ministers, said it had not been possible to reach an agreement on a plan to share 120,000 refugees who have arrived in Italy, Greece and Hungary.

"If we don't find a solution, then this chaos will be the result," said Asselborn. Referring to the Schengen passport-free zone, the minister said Germany's decision to deploy police on borders and trains could trigger "a domino effect, and then we can forget Schengen."